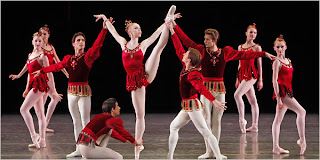 All good things must come to an end and as such, the New York City Ballet’s winter season ended this weekend with the Balanchine classic Jewels. This was, overall, a nice piece and pretty to look at. It was also a special treat to stand out on Lincoln Plaza, a New York institution, and see everything covered in snow, including the barren tree branches, and think, “I heart New York"
Jewels consists of three pieces that Balanchine put together, each piece using a different composer’s music. The unifying theme is the costuming; each dancer’s costume is adorned with crystals and richly colored fabric, hence the name Jewels.

The first piece is Emeralds. This was typical Balanchine: The technique was evident, each step said, “Look how pretty I can be” and the music served more as an accompaniment rather than motivation for the steps. My first reaction was that the colors were bold but the dancing was drab and muted. Finally, the penultimate movement of Emeralds got lively and more spirited. It ended in grand fashion and I thought, “What a good way to end the piece.” But, that movement was only the penultimate and, alas, there was more to come. The actual finale movement of Emeralds reverted back to the same typical Balanchine kind of dance as the first few movements and, for my taste, ended on a rather boring note, despite the beautiful vibrant green settings and costumes. 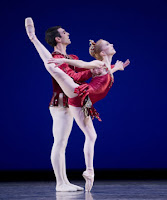 Next up was Rubies. This was terrific - probably because it was the least Balanchine-ish of the three pieces and actually seemed to have a little bit of Robbins in it. It didn’t – the piece was entirely choreographed by Balanchine, but I learned from the program notes that Rubies was choreographed after Balanchine had worked (briefly) on Broadway, which explained the flashier and livelier steps. In Rubies, I finally saw the music in the movement – that is, each step was undeniably motivated by the music. Plus, Benjamin Millepied was the featured male dancer and he was, surprise, surprise, phenomenal here, leaping and bounding all over the stage, doing flexed out 360 turns high in the air. I’ll say again: He’s a fantastic dancer and I can’t wait for next season so I can see his work as a choreographer. 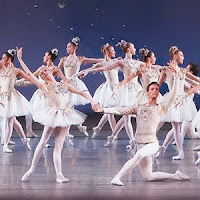 The final jewel was Diamonds. This, unfortunately, went back to typical Balanchine mode and this time the costumes and set design weren’t particularly vibrant, and the piece got off to a rather lackluster start. It did, however, build with each movement until the finale when 34 dancers were fluttering about the stage in unison. I always like watching big groups of good dancers moving as one and this was no exception. After a slow start, Diamonds ended with a finely finessed finish.
That’s all from NYC Ballet for now. The spring season begins in May so check back then for reviews of four programs, including three world premiere ballets.