Showing posts from July, 2010
Show all 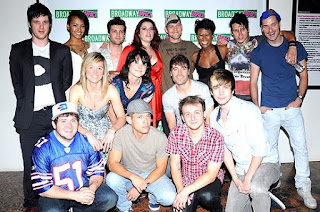 American Idiot in the Media
Lots of Idiot goodness to get to this week – the Idiots were all over!

American Idiot Makes an Impact
In this video, made to promote the Idiots’ appearance at Joe’s Pub for a Broadway Impact benefit (more later), Alysha Umphress, an ensemble Idiot and featured in the number “Too Much, Too Soon” brings us backstage at the St James. Watch as the cast does vocal warm ups; the cast does physical warm ups; and John Gallagher, Jr. does tongue warm ups. Fantastic.

At said benefit, (held Sunday, July 25) most of the talented cast performed a rousing concert; some of the actors/musicians (like Joshua Kobak, Brian Charles Johnson & Chase Peacock (a.k.a. Fran Sancisco) and Declan Bennett) played original songs and others played (funny, sexy and thrilling) covers. Throughout the night, recent birthday boy Gerard Canonico served as the house drummer while associate music director Jared Stein tickled the ivories. Playbill.com and Broadwayworld.com were on hand to photogr…
Post a Comment
Read more 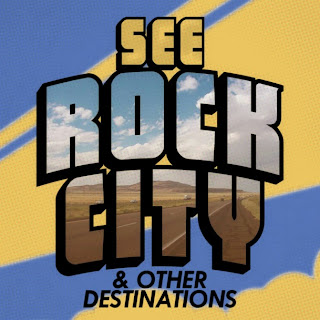 Excuse me! Where are you going? Do you know? Do you know what you will find when you get there? What are you afraid of? What will happen along the way? These are some literal and existential questions raised and explored in the beautiful new musical See Rock City & Other Destinations.

See Rock City, with music by Brad Alexander and book and lyrics by Adam Mathias, is produced by the Transport Group, whose mission is to create “intimate works by American writers that illuminate the American experience. [Their] integrated production elements distill the material to its core.” They fulfilled their mission with this song-cycle musical that, through several variations-on-a-theme vignettes, follows people on their journeys to various American landmarks. The vignettes seem to me to be sign posts marking journeys of self-discovery. The power of the sights forces the characters (and us) to confront the power within ourselves.

For example, first we meet Jess, who is sitting in a diner while e…
Post a Comment
Read more

“Are they sick, or am I sick?” asked the older woman sitting next to me at Second Stage Theatre yesterday, as we broke for intermission during the world premiere of Paul Weitz’s Trust. You see, while Trust is about trust (and control and the imbalances within relationships) what sets off our protagonist, Harry, is a trip to an S&M dungeon where he meets a familiar dominatrix. The first act actually starts and ends there, and that clearly made my neighbor uncomfortable. I wasn’t so uncomfortable. (Which made me wonder if perhaps I was sick.) But I did start to think about why this play was working for me while Make Me, which ran at the Atlantic a couple years ago and had a similar setting, didn’t. At first I thought maybe it was the actors. Make Me had actors of varying ages, none of whom I was particularly fond of beforehand. Trust stars theatre favorite Sutton Foster (who simply nails everything she tackles) and TV and movie guy Zach Braff. (Bobby Cannavale and Ari Graynor co-sta…
Post a Comment
Read more 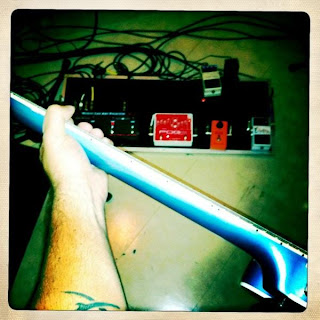 American Idiot in the Media
This week, Playbill.com featured the first in a series of backstage videos from the St James. In this installment, John Gallagher, Jr., Michael Esper, Stark Sands and Rebecca Naomi Jones are interviewed in John’s dressing room.

In related news, while I was crying my eyes out at the Booth, watching Alice Ripley, Jennifer Damiano and (the amazing) Brian d’Arcy James play their final performance of Next to Normal on Broadway (it was even more emotional than usual, plus Brian Yorkey and (the genius) Tom Kitt came out at the end to give a curtain speech), Johnny was playing a benefit show at Ars Nova. Playbill.com was on hand to capture some of the fun.

Welcome the New Idiots
As mentioned in Media Morsels a couple of weeks ago, Favorite Sun Joshua Henry will star in the upcoming Broadway run of Kander and Ebb’s The Scottsboro Boys. As such, Henry played his final performance in American Idiot on Saturday, July 17 and this week Hair alum (the replacement cast) Wallac…
Post a Comment
Read more

To sleep: perchance to dream: ay, there’s the rub,
For in that sleep of death what dreams may come,
When we have shuffled off this mortal coil,
Must give us pause
(Hamlet, Act III, Scene I)
We all knew Shakespeare was a genius, but prescient? I don’t think he could have fathomed Christopher Nolan’s excellent new film, Inception, but I think he would dig it.

Inception follows a team of dream interlopers who, generally, go into people’s dreams to extract secrets and other information. The plot is sprung into action when a wealthy business man asks the team, led by Leonardo DiCaprio’s Cobb, to try inception: Rather than extract information from a person’s subconscious during a dream, the team is to plant the seed that will begat an idea, hence the term inception. (As a side note, I thought that the very conceit of the movie raised an interesting question about the morality involved – or absent – in technological advancements. The movie doesn’t necessarily give us any answers, but I like that i…
Post a Comment
Read more

Bloody Bloody Great News!
With 100% of the precincts reporting, I’m ready to call this election: Bloody Bloody Andrew Jackson is officially coming to Broadway – with its sexy charismatic star, Ben Walker, in tow! On Thursday, The Public announced that “Bloody Bloody Andrew Jackson just can’t be stopped.” That’s right, our seventh president is headed to the Jacobs Theatre (recent home to God of Carnage, which is possibly coming to a movie theatre near you). Performances will begin September 21, though an opening night date has not been announced. Tickets are not yet on sale but you can be bloody sure that when they are, I’ll be first in line! And the [Recorded, Synthesized] Band Played On
Several years ago, amid stalled negotiating sessions with producers, theatre musicians went on strike. Rather than play with canned music, the musicals went dark during the strike. (Or maybe this was just threatened. I wasn’t in New York then and my memory is fuzzy.) Now, it seems the thinking is chang…
Post a Comment
Read more

The Kids Are All Right (Or Are They?)

In a rare move for me, I saw two first-run movies in the movie theatre over the last two weekends, Cyrus and The Kids Are All Right. Both were Sundance-darlings; both were about relationships – between lovers and between parents and children; both were set in sunny California and both had good casts. However, that’s about where the similarities end because in the all important category of “Was it good?”, the answer is split.

Cyrus was a hit at Sundance and has been building buzz ever since. But I felt let down by the film. It wasn’t entirely bad but it certainly didn’t live up to the hype. Jonah Hill stars as the titular Cyrus, a 22 year old guy with serious mommy issues. Mommy, also known as Molly, is played by the lovely Marisa Tomei, who does warm, quirky and sharp-tongued very well. Molly and Cyrus have a disturbingly close, co-dependent relationship that is challenged when Molly meets and starts dating John, played by the versatile John C. Reilly.