Showing posts from September, 2013
Show all

NYCB Just for Fun: Carnival of the Animals, Jeu de Cartes and The Four Seasons 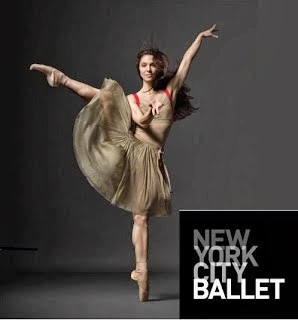 The fall season is in full swing at the New York City Ballet. On Saturday afternoon, I attended the “Just for Fun” program, and it was lovely. We begin with Carnival of the Animals , a 2003 Christopher Wheeldon ballet that I had never seen before. Using music from Camille Saint-Saens and narration written (and originally performed by) John Lithgow, Wheeldon tells the tale of little Oliver (Maximilian Brooking Landegger), who falls asleep in the Museum of Natural History, and at night, all the creatures come to life, taking on the personalities of various people in the boy’s life. (In this “revival,” the narrator is played by stage veteran Jack Noseworthy.) What a fun, creative and wonderfully imaginative ballet. Tapping into a child’s imagination, Christopher Wheeldon creates a delirious fantasy world, a panoply of dreams come to life. Each species has a distinct choreographic language, and seems to make perfect sense. (That is, it makes sense that the child would ima
Post a Comment
Read more

Emmy Extras In case you missed any of it, here's a round up of Emmy coverage: Full wrap up , including a list of award winners and fashion winners and losers Emmys Pinterest board , complete with red carpet photos, pics of all the winners and fun party snapshots Culturalist's Best Emmy Gifs , including my picks Broadway.com has a round up of the stage veterans, like Jeff Daniels  and Bobby Cannavale , who won Emmys The Hollywood Reporter  offers: number of wins by network and series  (HBO and Behind the Candelabra  lead the packs); backstage pictures ; and best and worst moments from the telecast Vulture offers the best freeze frames from the broadcast Buzz Feed also gets into the game , bringing us "The 19 Best Seen and Unseen Moments" from the Emmys Neil Patrick Harris , our Emmy host ( who delivered record ratings ), treats us to a number in the middle of the show: Joseph Gordon-Levitt Makes Feature Writing and Directing Debut The talented (a
Post a Comment
Read more

Most writers are taught to write what they know. Tennessee Williams took that advice to heart when constructing The Glass Menagerie , his breakthrough play and the most autobiographical work of his career, in which he presents the Wingfield family, matriarch Amanda and her children, Tom and Laura. Much like Williams’s own mother, Amanda is overbearing and disappointed in her children. Like Williams, Tom is a poet and a romantic, stuck in a dead-end factory job. (Williams had several punch-the-clock jobs before finding success as a writer.) And Laura is a tribute, almost, to William’s sister, Rose, who, like Laura, had a physical abnormality and was terribly shy.  Fittingly, The Glass Menagerie is a memory play. As Williams wrote in the stage directions, “the scene is memory and is therefore nonrealistic. Memory takes a lot of poetic license. It omits some details; others are exaggerated.” Tom, our narrator throughout, expands on this. He says, “I am the opposite of a stage mag
Post a Comment
Read more

So it was a decent award show, with some surprising wins. As expected, Neil Patrick Harris was a great host, keeping the show moving at a mostly watchable pace. (You know what did slow down the broadcast? Shemar Moore's awkward backstage bumpers.) Will Ferrell coming out to present awards in his basketball shorts and with his three sons in tow was pretty funny. What did you think of the interspersed In Memoriam tributes? Some of them were particularly moving (like Rob Reiner's tribute to Jean Stapleton and Edie Falco's tribute to James Gandolfini), but were they appropriate? Why were these people singled out for tribute and not others who passed away during the year? For those who were not singled out, was it not a little like kicking someone while s/he's down? How do you think their families felt, with the message essentially being, "your beloved deceased family member isn't important enough." I thought it was inappropriate and not necessary. (When
2 comments
Read more
More posts