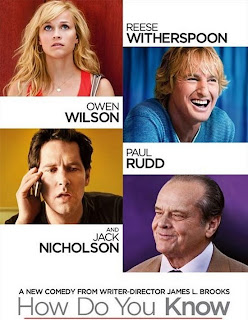 Reese Witherspooon’s last movie was an animated one called Monsters vs. Aliens. Keeping with that titular syntax, her latest live-action movie, How Do You Know, could have easily been called Platitudes vs. Attitudes. In James L. Brooks’s relationship dramedy, Reese’s Lisa attempts to steer her way through a fling with Owen Wilson’s Matty and a budding friendship with Paul Rudd’s George, who is currently under federal investigation for some shady business relations, brought to light by his father, Jack Nicholson’s Charles.

Some people have said that the plot is confusing, but I disagree. I found it to be pretty straight forward. The characters and their interactions are a little confusing, like how, for example, it’s even a choice between the jerky Matty and the charming George. But, maybe that’s just because I like Paul Rudd. In any case, on possibly the worst day of their respective lives, Lisa and George go on a date (though Lisa is already involved with Matty). It seems like a disaster but a chance meeting on an elevator several days later allows Lisa and George to see each other in a new light.

All the while, Lisa, Matty and Charles are guided by platitudes: They live their lives based on clichés. To wit: Lisa has tons of colorful Post-It notes with “inspirational sayings” written on them posted throughout her apartment, including an overwhelming collage on her mirror.

(On a side note, when we see these Post-Its, it is actually a very poignant moment: Lisa, an Olympic softball player, has just learned she didn’t make the team. She stands before her mirror, idly brushing her teeth, staring at her reflection. Reese is so good that you see her mind wander to the rejection. As tears threaten to overwhelm her she scans the Post-It collage and staves off the tears. It’s a credit to Reese’s skill as an actress that this came off well, instead of melodramatically.)

Aside from a funny saying from her dad, “Don’t drink to feel better; drink to feel even better,” most of the quotes by which Lisa and the others, except George, live by are bullshit. They’re simple one-liners that are supposed to make you feel better or see you through some challenge, but they are completely lacking pathos. That’s the attitude part, and that’s where George comes in.

George is a pretty honest guy and definitely a rule follower but when his world comes crumbling down from the investigation, he takes stock and decides to follow his heart – meaning he goes after Lisa, despite her protestations and unavailability. Through George’s friendship (and through a touching if slightly saccharine scene involving a birth and a proposal), Lisa must learn to eschew the platitudes and embrace the attitudes.

This wasn’t a great movie, but I liked it enough – mostly because of Reese and Paul. Jack Nicholson was fine, breathing and flaring his nostrils like he usually does. And though Owen is my least favorite of the three brothers (Luke is number one and Andrew’s number two), he’s the right guy for the likable but douchey Matty, a pitcher for the Washington Nationals. (Most unbelievable part of the movie: the notion that there are Nationals fans.) For me, though, it comes 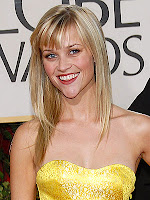 down to the stars.

Reese is good as a young woman trying to figure out what she wants from life. Until this point, things have worked out. But now she’s 31 and jobless; her friends talk about all-consuming romantic relationships, but Lisa doesn’t have a trite saying for that. Reese nails the strong headed, type-A Lisa, while making believable her initial wariness but eventual embrace of George.

And Paul Rudd is nothing if not charming. George is rather down on his luck but, guided by his attitude and heart, he is able to see a brighter path once the luminous Lisa enters his life. Paul has perfected the simultaneously kind of dorky, kind of awkward but always earnest angle (beginning with his breakthrough in Clueless and continuing here) and it worked like a charm on me. He’s so appealing as the lovable loser – you just want to reach through the screen and give him a hug.

Still, the movie was a little slow at moments and my parents, who accompanied me to the movie, didn’t like it at all. (They found the characters’ inaction and inarticulate nature annoying.) I liked it more than the season’s other rom-com, Love and Other Drugs (sorry, Jake Gyllenhaal’s pecs and Anne Hathaway’s breasts) mostly because it wasn’t trying to be something it wasn’t. It’s a story about relationships and answering the age old question: How do you know? While renowned filmmaker Brooks doesn’t give explicit answer, I’d venture to say that his implicit answer is you know not because of some stale expression posted on your wall but rather because, in your heart, you just know.