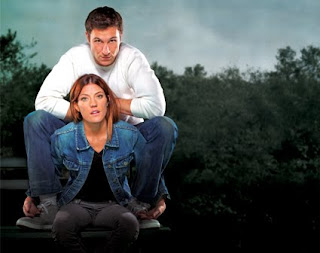 While Bloody Bloody Andrew Jackson may no longer be playing on the boards, the spirit of “Illness as Metaphor” is alive and well in Rajiv Joseph’s Gruesome Playground Injuries. In this new production playing at Second Stage Theatre, Kayleen and Doug relate to one another through their various bloody injuries and illnesses.

The story, which tracks the pair from ages 8 through 38, is told in a non-linear way, with projections marking time and injury. (Example: “Age Eight: Face Open”) I like this storytelling device (also used to good effect in the much less grotesque (500) Days of Summer) because it forces you to pay attention and it allows the playwright to reveal bits of information when he wants to and to hold back bits of information when he wants to. As an audience member, I like it when a seed is planted in one moment and the payoff comes somewhere down the line – it’s an “a ha!” moment, and it keeps you from guessing what’s going to happen and tuning out.

Doug (Pablo Schreiber) and Kayleen (Jennifer Carpenter) are not particularly likable people. The only way they know how to communicate is through pain. Kayleen keeps asking Doug, “Does it hurt?” She’s asking after whatever happens to be his most recent injury but as the layers reveal, it seems she means something else. She wants to know if their interactions hurt; if they make Doug feel something. Almost as if it was the case that if it doesn’t hurt it’s not real. These are two terribly damaged people, their physical injuries not withstanding.

As directed by Scott Ellis, the play moves at a quick clip, with the scenes lasting only as long as they need to, and not a moment more. Jennifer Carpenter struggles a little playing young Kayleen, sometimes coming off as an adult trying to play a child or teen rather than just playing a child or teen, but as adult Kayleen, Carpenter brings a guarded fierceness as she spars with Doug. As Doug – at all ages – Pablo Schreiber (who kind of looks like a cross between Zach Braff and Seth Meyers) excels, bringing nervous energy to young Doug and strangely charismatic bravado to adult Doug.

Most impressive, though, was the scenic design by Neil Patel. The stage was abbreviated – they’re basically playing on a double-wide catwalk. In fact, Second Stage sold seats “behind the stage,” so Doug and Kayleen couldn’t escape. They were confined within their world, which, given their propensity toward injury and hurting the one they love most, is maybe for the best. Patel’s set is stark and sterile, suggesting that Doug and Kayleen bring the pain upon themselves. Some of the cubes that make up the set are filled with water, which the actors use to wash themselves during scene transitions. Or are the characters cleansing their wounds, baptizing themselves while readying for the next injury? Patel has cleverly hidden drawers, benches and shelves within the set to ensure quick and seamless transitions from scene to scene.

This is the second play of Joseph’s I’ve seen, the first being the deceptively devastating (in a very good way) Animals Out of Paper, a three character play that was well received at Second Stage’s Uptown Theatre a couple of summers ago. He is a rising playwright to watch; his Bengal Tiger at the Baghdad Zoo was a 2010 Pulitzer Prize finalist (you’ll remember that Next to Normal, which had roots at Second Stage, was the eventual winner) and will be produced on Broadway, starring Robin Williams, this spring. (New York Times theatre critic Ben Brantley, in his review of Injuries, suggests that this play is just a sketch of Bengal Tiger, and that the latter is the one to catch.)