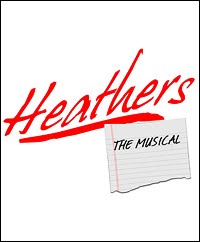 Greetings and salutations! Heathers is back, so dust off your croquet mallet and find your big red scrunchy.

On Tuesday night I was delighted to attend a staged concert of Heathers: The Musical at one of my favorite venues, Joe’s Pub. Before I even get to the show, I have to name drop for a moment. While waiting in line to go in, I gathered from the others gathered that the crowd was full of family and industry types, not just theatre rats like me. And, lo and behold, I turned around and Billy Porter was standing right there! (Porter is a theatre vet and absolutely hilarious in The Broken Hearts Club.) No sooner was I seated on my comfy couch in the Pub than I spotted Victor Garber sitting at the table next to me. And as if that wasn’t neat enough, before the show began Mr. Garber was joined by some friends, including Ms. Meg Ryan. So that was the pre-show!

And now on to the actual show. This concert version was just a concert: While the director read some stage directions and the actors spoke some of the dialogue, the evening was really all about the songs. That being said, I couldn’t get a consummate feel for how well Heathers: The Musical would work in a fully realized and produced production on a regular proscenium stage. But, I did get a feel for the talent and the strength of the songs, seven of which had their premiere last night. (The production has been gestating for a few years and has enjoyed a run at La Jolla Playhouse.)

The show was a little raunchy and very tongue-in-cheek funny, hitting the right notes that its film predecessor did. And while the ending was bordering on the saccharine, a healthy dose of snark kept it from giving me a tooth ache. (…because of the sweetness. Clueless? Anyone?) Plus, there were some standout numbers. I’ve already decided that “Will You Fight for Me?” (or whatever it’s actually called) can be added to my “Fine, Fine Line” list of songs.

I’ll digress to explain: “There’s a Fine, Fine Line” is a very sweet and touching song from Avenue Q. Its sincerity and effectiveness always seemed to, for me, transcend the wink-wink, nudge-nudge funny of the puppet-tastic Tony winning show. It’s always been on of those “I’m a moody gal and I need to sing out my feelings” songs; more recently, “The Great Compromise” from Bloody Bloody Andrew Jackson has been added to the list. While the rest of the show is full of mugging and snarky asides, this number is powerful and emotional, pausing the show for a moment and showing its writers’ knack for serious sentimental songwriting. So that’s the kind of song that “Will You Fight for Me?” is and I’m eagerly looking forward to a cast recording – or at least a demo – so I can play it over and over again.

The cast assembled for this concert was full of talent. James Snyder (last seen on Broadway in the title role in the too-short lived Cry-Baby) and PJ Griffith were just right for the macho jockos; Jenna Leigh Green, Christine Lakin (“Al” from Step by Step!) and Corri English were devilishly good as the self-possessed and self-centered Heathers; Julie Garnye stood out with her fantastic, powerhouse of a voice as Martha “Dumptruck” Dunnstock; Jeremy Jordan has a great rock voice and was very sexy as the very sexy (as per the stage directions!) JD, the role originated on film by Christian Slater; and Annaleigh Ashford, most recently seen on the boards as Jeannie in Hair, was a great combination of artsy nonchalance, Heather-y cuteness and feisty leading lady charm to bring Veronica (Winona Ryder’s role) fully to life. I’d like to see her continue on with the show should it be lucky enough to receive future productions.

No word yet on whether or not such a future production is actually likely, but my best guess says that it is. I think it’d work best as a subversive, off-Broadway mainstay, a la Reefer Madness. So, until further notice, I’ll ask you to “lick it up, baby. Lick it up!”

(Check out these Broadwayworld.com photos of Heathers: The Musical in rehearsals.)


Correction: One of the producers of the show left a message with this correction: "We've done a few staged readings in LA and La Jolla has offered us a slot courtesy of Artistic Director Chris Ashley. We have not done the fully staged show anywhere yet, however. That's the next step." I apologize for the misinformation, thank the producer for the correction and wish everyone at Heathers: The Musical the best of luck in that next step!
heathers joe's pub off-Broadway theatre