Ghosts in the Cottonwoods

I’ve seen bad plays before. (I’m looking at you, This.) Ghosts in the Cottonwoods is not a bad play, but I didn’t like it.

I must admit I feel bad saying that. Ghosts in the Cottonwoods is an Adam Rapp play, and Adam Rapp nearly tops the list of my favorite modern playwrights. Ghosts was one of his first plays, actually first written some 15 years ago. Teaming up with the Amoralist Theatre Company*, Rapp takes another swing at it. I don’t know what it was like in 1996 when it was developed at the Eugene O’Neill National Playwrights Conference. In the program notes, Rapp says it was “overwrought, bloated [and] unsure of itself.” Now it isn’t quite any of those things: It has Rapp’s sharp writing; a very distinct vernacular with which all the characters speak, a trope often found in Rapp’s work; it is well acted and thoughtfully staged, something I’ve come to expect of Rapp, especially now that he’s taken to directing his own work. What I have trouble with is that while I was engaged inasmuch as it held my attention for 90 minutes and my mind didn’t wander too far off, it wasn’t particularly engrossing (at times it was downright disturbing) and worse yet, I found none of the characters to be at all relatable.

Ghosts did seem (perhaps at a stretch) relatable to another of Rapp’s works, though, his play Kindness. In both plays, Rapp explores familial relationships, particularly between mother and son. In both plays, strangers and/or interlopers come in to the protagonists’ lives and shakes things up, for better or

(questionably in Kindness, definitely here) for worse. Both depict broken boys trying to find their way in the world. I found this relation to be most interesting, showing growth in Rapp’s writing and psyche. (Even though Rapp revisited Ghosts for this production, rewriting and updating, the seeds were planted long ago so I think it’s fair to look at Kindness as showing growth since Ghosts, space time continuum be damned.)

For my taste, Kindness, though distressing here and there in its own right, was much easier to sit through and because it depicted people a little more like me than those populating the Scully house in Ghosts, I liked the characters in Kindness; I had more sympathy for the Kindness characters; and I actually cared about what happened to them. (In Kindness, our protagonist is a somewhat sullen Midwestern teen on the cusp of adulthood; he’s joined by his sweet if sometimes dim mother, a Holly Golightly-esque party girl and a colorful cabbie. The folks in Ghosts live in the , aren’t well educated and are backwoods and maybe a little manic.) So you see I feel bad saying I didn’t like an Adam Rapp play, but perhaps the more politick way to describe my reaction is that it simply wasn’t my cup of tea (…or homebrewed whiskey, as the ghosts may say).

The performances were all solid, though. Nick Lawson was convincing as Pointer, an Eminem-in-the-making-wannabe, housing his too-big basketball shorts and writing FUBU on his boxer’s waistband to try to approximate the images sold by 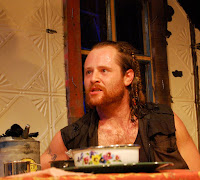 his idols, including Jay-Z. Lawson’s Pointer seems to spit out rhymes so fast, like he’s afraid everything could end at any minute so he better get it out quickly. As his mother, Bean Scully, Sarah Lemp does a nice job portraying a woman who is tough because she has to be, but who delights at being made to feel feminine, as she does when Newt shows up at her door. Newt, as played by William Apps, is the most charming bounty hunter you’ll ever meet, and there are some genuinely touching and tender moments when Apps’s Newt forgets his mission, lets down his guard and connects with Bean. Rounding out the cast is the plucky Mandy Nicole Moore as Shirley Judyhouse, Pointer’s literate lover, and James Kautz and Matthew Pillieci, as Jeff Scully and The Man, respectively. When Kautz and Pillieci, playing escaped convicts, make their respective entrances, each thrashes about the stage like a feral beast, reigning terror down onto a Scully house that’s already moody from actual rain. 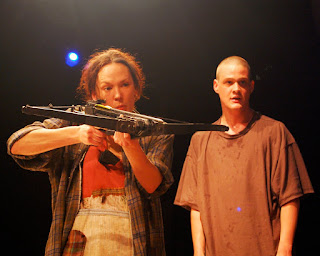 *A note about The Amoralists: The theatre company’s mission states that it “produces work of no moral judgment.” They are “dedicated to the honest expression of the American condition…[and] plunge the depth of the social, political, spiritual and sexual characteristics of human nature.” In this sense, The Amoralists are the perfect theatre company to produce Ghosts in the Cottonwoods. Rapp’s play certainly strives to express the American condition (albeit a part of America I’m not, shall we say, familiar with) and definitely plunges the depth of the myriad characteristics of human nature. While I didn’t love the play, as an artist I am grateful to Theatre 80 (the house giving a home to this production); The Amoralists; and Adam Rapp for creating safe spaces for these voices to be heard. Surely amid the glitz, glamour and splashiness of so much theatre (and other entertainment) today, we must recognize and celebrate the companies and artists putting their souls – or ghosts – out on display.

All photos by Annie Parisse

Photos, from top to bottom: