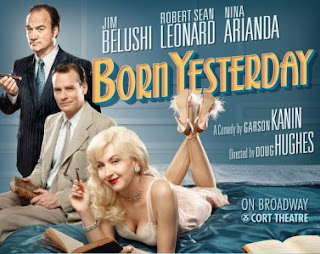 Because I wasn’t born yesterday, you can’t fool me into thinking that Born Yesterday is some paragon of comedic theatre. It’s good, but there was nothing about the story or the production that I loved.

The action of Born Yesterday is simple: It’s 1946 and a corrupt businessman, Harry Brock (Jim Belushi), comes to Washington, DC, to lobby some senators. With him is his long-time girlfriend, Billie Dawn (Nina Arianda, although I saw understudy Liv Rooth), who is blonde and beautiful but not too bright. Brock enlists Paul Verrall (Robert Sean Leonard) to “smarten up” Billie. Paul ends up opening Billie’s eyes to what else is out there and she turns on Harry and falls for Paul.

On film, Born Yesterday made a star of Judy Holliday. In this Broadway revival, critics are raving over Arianda, bestowing upon her every superlative around. But, as I mentioned above, I didn’t see Arianda. I saw understudy Liv Rooth. I thought she did a very good job. I have no complaints or criticisms of her performance. (She seemed obnoxious at first, but that’s the character; Billie has a somewhat satisfying character arc and Rooth played it well.) But from the material, I can’t conceive of what Arianda does that is so impressive. I don’t see the room for wowing.

Maybe that’s part of what makes Arianda’s performance so spectacular. The material isn’t impressive but perhaps Arianda does something magical with it. With all the buzz, I’m curious to see Araianda in the role, but I didn’t like the play enough to want to sit through it a second time.

Belushi’s character, Brock, is an insufferable, arrogant, egotistical blowhard. (Having no other exposure to the role or to Belushi (other than 20 years ago when I saw Curly Sue), I’m giving Belushi the benefit of the doubt and saying it’s the way the role is written, not Belushi himself.) I can see in him absolutely nothing that would attract the young chorus girl Billie. I think the only explanation is that Billie liked his money and prowess…and also she has daddy issues.

I liked Robert Sean Leonard’s understated performance as Paul. I’ve always been fond of Leonard from his days in Dead Poets Society (which also starred a certain Aaron Sorkin alumnus, Josh Charles!) so I was looking forward to seeing him on stage. His was the least flashy role and he amped up that aspect by remaining aloof and at ease at the tensest moments.

Additionally, I found the back-room politics of it all to be timely as ever, even though the work, written by Garson Kanin, is over 50 years old. When exploring his lobbying options, Brock is told by his lawyer/advisor Ed Devery (a good but underused Frank Wood) that either he “could run this town or run the men who run it.” I wonder which would be more attractive to a power hunger office seeker. Later in the play, Brock’s presence in Washington is questioned and he bellows, “I’m here to make sure I get what I paid for.” Any of that sound familiar?

The familiar political themes and good performances are reason enough to revive Born Yesterday now, and a decent reason to see it, but I still can’t give it a ringing endorsement, especially with other, terrific plays playing right now (for example, Jerusalem, Arcadia and The Normal Heart).