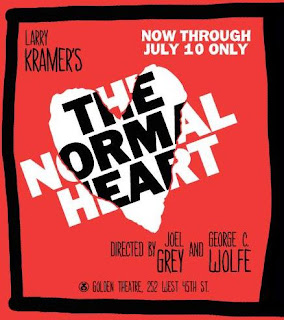 Written by Larry Kramer in 1985, The Normal Heart follows Ned Weeks (Joe Mantello), who is more or less Kramer’s surrogate, as the AIDS plague hits New York in the early 80s. (The action of the play happens between July 1981 and May 1984.) Ned and Mickey (Patrick Breen) have been fighting for gay rights since Stonewall, with varying amounts of vigor and with varying results. By 1981, the gay culture was defined by sexual liberation, though that liberation may have a cost.

Dr. Emma Brookner (Ellen Barkin) finds herself treating hundreds of gay men (at one point, she notes she’s seen 238 cases), all of whom have similar symptoms, but nothing identifiable. AIDS hasn’t been precisely discovered yet; there was no way to test for it; it wasn’t known how it spread. All Dr. Brookner can say to Ned’s many questions is, “I don’t know.”

This entire play is Kramer trying to be heard. In fact, as you leave the theatre, you are handed a letter from the activist playwright. In the letter, he pleads with readers. “Please know that AIDS is a worldwide plague. Please know that no country in the world…has ever called it a plague, or acknowledged it as a plague, or dealt with it as a plague. …Please know that the world has suffered at the very least some 75 million infections and 35 million deaths. When the action of the play that you have just seen begins, there were 41.” Kramer clearly still feels unheard, and judging by his statistics, his feelings are justified.

After experiencing this powerful play and reading Kramer’s letter, I felt angry. Angry that my government and the press would so easily overlook such a plague, and be so dismissive of the people it affects. At one point, Ned says to Bruce (Lee Pace), who is younger than Ned and very handsome, and also not fully out, “Have you been following this Tylenol scare? In three months there have been seven deaths, and the Times has written fifty-four articles. …For us – in seventeen months they’ve written seven puny inside articles. And we have a thousand cases!” I can’t imagine anyone not being outraged by this. Where is the compassion for our fellow man? As Ned asks in the play, “What causes silence like that? …everyone has a million excuses for not getting involved. But aren’t there moral obligations, moral commandments to try everything possible?” (On The Normal Heart’s website, there is a “Get Involved” tab; visit that page to learn how you can make a difference, and say to Kramer and everyone affected by AIDS, “I hear you.”)

Not to marginalize the plague ravaging Ned’s friends, I offer that the themes in The Normal Heart are more universal than you might think. I’m thinking in particular of the exchanges between Ned and his older brother, Ben (Mark Harelik). Ned has always felt that Ben doesn’t fully accept him because of his sexuality. Ben tries to assure Ned that he does, but Ned is not convinced. When Ned visits Ben in his office to rally his support for Ned’s organization, they have the following exchange:

Ned: …You’re a respected person. You already have your dignity.

Ben: We better decide where we’re going to each lunch and get out of here. I have an important meeting.

Ned: Do you? How important? I’ve asked for your support.

Ben: In every area I consider important you have my support.

Ned: In some place deep inside of you, you still think I’m sick. Isn’t that right? Okay. Define it for me. What do you mean by “sick”? Sick unhealthy? Sick perverted? Sick I’ll get over it? Sick to be locked up?

Ben: I think you’ve adjusted to life quite well.

Ned: All things considered? (Ben nods) In the only area I consider important I don’t have your support at all.

It’s awful enough to feel dismissed by your government and by otherwise respected institutions but to be dismissed by your own brother, by someone you admired and held is such great esteem, and to be dismissed because of something you can’t control, is one of the worst feelings. While not everyone experiencing The Normal Heart can empathize with Ned’s specific situation, I think a great number of people can sympathize with Ned and his friends’ feeling of being eschewed for something “more important.”

Aside from Larry Kramer’s words, the play is given a flawless production here. The great ensemble cast includes, in addition to the aforementioned actors, Luke Macfarlane, Wayne Alan Wilcox, John Benjamin Hickey, Jim Parsons and Richard Topol. All of their superb and superlative performances are directed by Joel Grey and George C. Wolfe. (In discussing the recent Tony nominations with a coworker, we both marveled at how the nominating committee was able to single out one of the “featured” actors for nomination, Hickey, when any of the others could justifiably be nominated, as well. (Mantello and Barkin also received nods for their work, Mantello as leading actor and Barkin as featured actress.))

The scenic design by David Rockwell is deceptively sparse. At first glance it looks like white walls. Upon further inspection, you realize there are quotes, statistics and names embossed on the wall. In the production notes of the published play, it is indicated what some of the “writing on the wall” may be, including a running count of the number of reported AIDS cases; the dates and locations of stories the New York Times ran covering the plague; and an entire passage from American Jewry During the Holocaust, used to, as Ned does in the play, compare the silence from supposed allies as well as the Jewish community during the Holocaust to the silence from supposed allies as well as the gay community during the start of the plague. This design is so great because while it adds layers of depth to the play, it is also unobtrusive, simply offering a space in which people can speak.

Three days later, I’m still consumed by this play. It is stunning and powerful and a must see. And I am particularly glad that, in a season that brought us the Spider-Man debacle, Wonderland and other tourist-ready, soulless and thoroughly unimportant fare, there is still room for this important work on Broadway.

Visit thenormalheartbroadway.com to learn more about the show, to get involved and to purchase tickets. 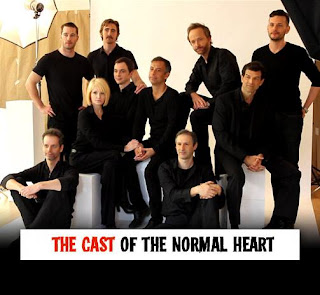