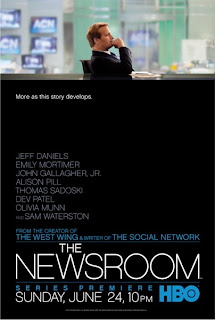 Oh. My. Thespis. I’m in love. The Newsroom is everything I had hoped it would; everything I expected it to be; and so many things I hadn’t yet imagined. In interviews leading up to the premiere, Aaron Sorkin has been bandying about the term “romantic” to describe the show. And you know what? It is. (Of course it is. Sorkin is the master of the perfect word choice.)

There is a wonderful and palpable romanticism of the journalist days gone by, the days of Murrow and Cronkite. And a romanticism about what the news could be. About an informed citizenry, “speaking truth to stupid,” as Mackenzie McHale (Emily Mortimer) says in the pilot, titled “We Just Decided To”.

And deciding to do something is really what this whole show is going to come down to. The climax of the first episode is set in motion when Jim Harper (John Gallagher, Jr.) is lucky enough to get some scoop on an emerging crisis. You could argue about the verisimilitude of his luck, but that’s not the point. The point isn’t how realistic it is that Jim would receive the tip but rather what choices the team in the newsroom makes once they have the information. It’s about deciding to trust the people surrounding you. It’s about deciding to have faith in yourself. It’s about deciding to stand up, rise above the bullshit of the day and do the right thing.

One of the things I love most about The Newsroom (and there are many!) is how inspirational and aspirational it is. Aaron Sorkin has populated The Newsroom, as he’s done on his other series, with intelligent people. Competent people. People who are good at what they do and want to be even better. People who “reach for the stars,” as Sorkin has had several of his characters, including Will McAvoy (Jeff Daniels), say.

How wonderful would it be for us to work with such people? With professional adults who act like professional adults rather than adults who plead to be coddled like a baby. With colleagues who, when faced with a challenge, so love their job that they dive right in, thriving on the adrenaline. (People who, when Leo shows them the slogan Let Bartlet Be Bartlet, respond with vigor and say, “I serve at the pleasure of the president.”) 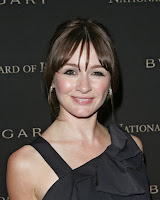 Sorkin fans will love noticing all the Sorkin tropes and re-purposed dialogue and ideas and scenarios. (To wit: there’s an interaction between Mackenzie and Jim in which Mac asks Jim to show her how he flirts. He starts with a tentative, “Hi.” Just like Dana and Casey in “Smokey.”) The show has a different, less fluid, more frenetic feel, which it should. This is a different, more frenetic environment.