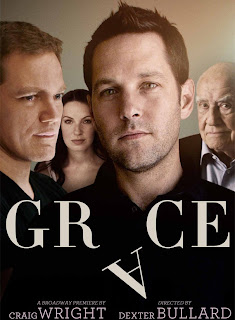 Some of my favorite movies and TV episodes start at the end, or at least not at the beginning. They start with a scene that happens toward the end of our story and then kick us back to the beginning so we can figure how we arrived at the known conclusion. And so I was instantly engaged at the start of Craig Wright’s new play Grace, which begins and end by asking, “Can we go back?”

In Grace (directed with precision by Dexter Bullard), Sara (Kate Arrington) and Steve (Paul Rudd) have moved down to Florida (from Minnesota) in order to open a chain of gospel-themed hotels. Their neighbor is Sam (Michael Shannon), who is grieving the loss of his fiance and healing from the accident that took her life and nearly took his. (The neighbors’ exterminator is Karl (Ed Asner), a device of a character who helps develop the other characters.)

Steve is not a "knower," he’s a believer. That’s what brought him to his faith and what also proves to be his tragic flaw. Think about it: if you simply believe in something - something unproven, something that requires you to take a huge leap of faith - isn’t the let down when holes are poked in your beliefs absolutely devastating?

And so, in a tight, thoughtful, superbly acted play, playwright Wright asks us to examine our own belief system. On the one hand, Sara’s anecdote about the moment she “found God” is incredibly compelling; you think, yes, I can see that. I can see how that is comforting and why you might humble yourself before these beliefs. On the other hand, Karl’s and Sam’s stories about their lack of faith are fully convincing. You think, yes, of course they are right. Look at all the horrible things happening - how could all this possibly be “allowed” by that greater force?

It’s a wonderfully well-written and thought-provoking play, and it is enhanced by a deceptively simplistic scenic design and expert performances.

Beowulf Boritt (If There is I Haven’t Found it Yet) creates one space for the two identical  condos in which Sara + Steve and Sam live. By keeping all the characters in the same physical space, even though they are in separate apartments, we get to be the omniscient overseer. It prompts us to question boundaries, especially with regard to privacy, and adds to a sense of uncomfortable intimacy. Plus, the set rotates unobtrusively, so as to allow us to see the argument being made from all different angles. It’s a clever bit of stagecraft that is used to great effect. 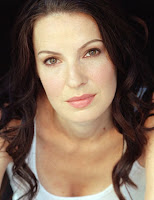 And bringing it all to life is a terrifically talented foursome. It’s a kick to watch Ed Asner on stage, after watching him on TV for so many years. He serves as the audience’s voice, and excels at making long, uninterrupted speeches interesting.

Kate Arrington, a Steppenwolf Ensemble member, is the heart of the show, bringing warmth and depth to a character we all think we’ve seen before.

The intense Michael Shannon (recently seen downtown in Annie Baker’s Uncle Vanya) is, surprisingly, the comic relief for the first half of the play. As his position on faith evolves, Shannon draws you in, laying bare Sam’s soul and making you wish you could somehow change the ending you know is coming.

Rounding out the cast is the lovable and charming Paul Rudd, playing very well against type. Rudd is most well-known for his work in silly but hilarious films like Anchorman and in surprisingly touching romantic-comedies and “bro-mances” like I Love You, Man and the upcoming Judd Apatow flick, This is 40. So it’s actually quite a treat to watch him tackle something this meaty, to watch him be unlikable. Rudd’s Steve is like a slick, used car salesman who devolves into a deranged mania when his beliefs are shaken, when he falls from grace.

Grace continues its limited engagement on Broadway through January 6. Learn more and purchase tickets on the show's website.