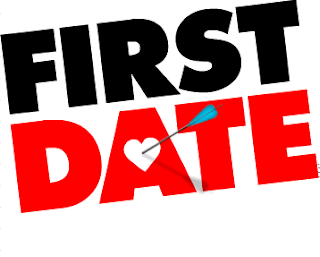 If only all first dates actually went this well. You can make the argument that the stages and rules of a first date (as laid out by First Date’s leading lady) are also applicable for theatre, and that as audience members, we approach seeing a show for the first time much like we approach a first date: hope for the best, expect the worst. This felt particularly accurate for me, as I didn’t know the creative team (a rare occurrence these days). I knew a couple of the actors but for the most part, it was a bind date for me, too. Fortunately, it was a successful one.

First Date, with a book by Austin Winsberg and a score by Alan Zachary and Michael Weiner, looks in on Aaron (Zachary Levi) and Casey (Krysta Rodriguez) on their first date. Aaron, a nice Jewish boy on the surface, was left at the chuppah over a year ago and has agreed to go on his first blind date. He’s set up with his friend’s sister-in-law, Casey, a serial dater who is a bit jaded yet full of moxie. Throughout the night (which more or less plays out in real time) Aaron and Casey are visited by voices in their heads, discouraging certain behavior, emphatically encouraging other actions. (The versatile ensemble is made up of Bryce Ryness, Kristoffer Cusick, Blake Hammond, Sara Chase and Kate Loprest.)

First impressions are a big part of first dates (as we’re reminded in the likable duet “First Impressions”) and on that front, First Date does well. David Gallo’s open set (evoking a comfortable New York City restaurant/bar) gives the players plenty of space to groove, which they do throughout, thanks to Josh Rhodes’s (Cinderella) musical staging and Bill Berry’s direction.

But, like with many first dates, there are some bumps along the way. The recurring “Bailout Song” is abrasive, unnecessarily digitized and disappointingly cliché. The idea is right – lots of daters enlist a friend to call them during the date so that if the date is going sour, the dater has an excuse to leave. (Remember the Sex and the City episode in which Carrie called Charlotte, “Hey honey, it’s me. Something bad happened.”?) But the execution is lacking. The auto-tuned digital cacophony was harsh, and the character making the call was the stereotypical bitchy gay best friend. Eye-roll. Of course Casey has that kind of chum. How inventive.

And Casey herself didn't win me over right away, although there is a dramaturgical reason why. From a storytelling perspective, Casey evolved as she should have throughout the course of the show. While she might not have made the best first impression (she is closed off and snarky at the start), over the course of 90 minutes Rodriguez brought welcomed layers to the character and we got to see in Casey what Aaron might have seen. (To be fair, Aaron might not be written as a perfect guy, but Zachary Levi is so darn cute that I probably overlooked whatever flaws Aaron was supposed to have.)

(While I’m ticking off my dislikes, one quick note about the costumes, by David C. Woolard: Aaron is chastised for being too dressed up (he arrives in a suit; the nice waiter helps to dress him down by telling him to ditch the tie and unbutton his collar). Casey even comments on it. But Casey is wearing a cute, trendy dress. (See the production still, by Joan Marcus, at right.) It might not be a ball gown, but it’s definitely on the dressier side, in my opinion, and no one says anything about her attire. Alas, the sartorial woes of female daters.)

With a fine, serviceable pop/rock score, the lyrics are sometimes difficult to decipher but when you do, you notice modern, well-observed insights and proclamations expressed in a good rhyme scheme. The writers have all worked extensively in TV and film, and there’s a sense of that slick, sitcom rhythm. That’s not a bad thing. It actually works to their advantage here because it keeps the laugh-out-loud funny show moving along where some first dates tend to stall.

Also keeping the show moving along is a hard-working ensemble. Five actors play 16 characters, from a bubbe to bad boys to an ex-fiancé, the talented performers gleefully intrude on Casey and Aaron’s date. In particular, Bryce Ryness (Hair) excels as three “voices” while showing off his excellent voice.

It’s great to see Krysta Rodriguez break out to leading lady status. This is her sixth Broadway show (she was in the original Broadway company of Spring Awakening) and while she has originated a role before (she was Wednesday in The Addams Family), this is the first time she’s taken center stage. (You may also recognize Rodriguez from her recent stint as Ana Vargas on Smash.) She has such a contemporary voice and seems terrifically authentic in the role. (Can’t get enough Krysta Rodriguez? Check her out on the Joe Iconis Rock and Roll Jamboree album. She sings on the tune “Anymore.”)

And Zachary Levi is sensational in his Broadway debut. I've never seen him in anything so I didn't know what to expect. He’s maybe the best looking guy I've ever seen (and he wears glasses and has scruff in the show!) so I was inclined to like him but he is a TV star coming to Broadway so I was also a little skeptical. Thank Thespis, he has the goods. (He was actually cast in the original company of Mel Brooks’s Young Frankenstein (as Dr. Frankenstein, no less) in 2007 but had to bow out of the show before rehearsals began in order to shoot Chuck, the NBC series for which he’s best known.) Levi has a fantastic voice, which he uses to great effect throughout, spot-on comic timing and an effortless charm mixed with sensitivity to make him a very welcome addition to the Broadway scene. I think it’s safe to say that Broadway has a new leading man.

So whether you're a Casey—been there, done that, seen the musical—or an Aaron—on the mend and looking for something lasting—take a chance on First Date. It's a refreshingly honest look at dating in the big city, and it introduces you to a creative with whom you just might want to have a lasting relationship.
First Date is now playing at the Longacre Theatre. Visit firstdatethemusical.com to learn more about the show and to purchase tickets. (Be sure to check out the bios, presented in the style of a dating site!) And with balcony seats available for just $35, First Date makes for a great first date.
Broadway Chuck comedy First Date Hair joe iconis Krysta Rodriguez musical Spring Awakening Zachary Levi