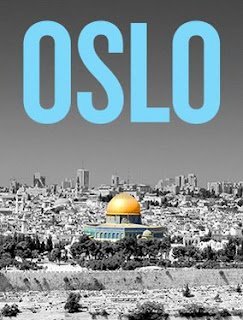 There has been unrest in the Middle East since Isaac and Ishmael, and various diplomatic efforts have tried to curb the carnage. In September 1993, the Oslo Accords represented the first-ever peace agreement between Israel and the Palestine Liberation Organization (PLO). In J.T. Rogers's play, we go behind the scenes to see what led to that historic moment.

(In program notes, Rogers explains the genesis of the play, and makes a point to point out that this is his telling of the events. He notes that everything in the play happened, but names, locations, and certain details have been changed for dramatic effect and expediency.)

It seems that a Norwegian husband-and-wife team got the ball rolling. Terje Rod-Larsen (Jefferson Mays) and Mona Juul (Jennifer Ehle) hatch the idea that under a specific diplomatic approach an agreement would be possible. Terje, an academic, believes that if a more personal approach is taken by the negotiators, they will be able to find common ground. (Mona is an official in the foreign ministry.) Via back-channeling and some misdirection, Terje and Mona are able to bring negotiators from Israel (first Yair Hirschfeld (Daniel Oreskes), a placeholder until an official Israeli representative is approved, then Uri Savir (Michael Aronov)) and the PLO (chiefly Ahmed Qurie (Anthony Azizi)), and they, eventually, hammer out the agreement that would become the Oslo Accords.

Indeed, it does seem that making personal connections helped the players break through ancient grudges. Before beginning the negotiations, for example, Qurie, the chief PLO negotiator, comments that he's never met an Israeli in person. His right hand man says to his Israeli counterpart, "You were my first Jew." We think the "others" are horrible until we meet them; we've seen this happen before. Think back to the the Harvey Milk era, when members of the LGBT community were encouraged to come out, thereby confronting prejudiced people with the fact that they've met a gay person, and it's OK. It's a wonder it took so long to try this approach in this arena. To be fair, though, the reviews regarding the efficacy of the Oslo Accords are mixed; the play's coda, though hopeful, admits as much. There is still work to be done.

Which is what makes this both so intriguing and cringe-inducing. Consider the geopolitical landscape these days. You have Brexit; "leaders" using chemical weapons on their own people; an irrational, unpredictable simpleton in the White House. I couldn't help but think of a couple of recent Pod Save the World episodes in which former Obama administration officials recounted the thought, care, patience, and humility that went into restoring diplomatic relations with Cuba and making the Iran deal. Are those days behind us?

As far as the production is concerned, I appreciated that Rogers took care to let us get to know these characters—these people, and he's aided by Bartlett Sher's direction. Hints of Sher's work with musicals (he won a Tony for South Pacific, and, among others, also directed The Bridges of Madison County and The King and I) are palpable. Sher incorporates a lot of movement, serving as momentum to keep the talks (and the play) going. And while it's men doing the negotiating, it appears that Mona, a woman was the pivotal player. It was her connections that allowed much of this to happen, and the negotiators say on more than one occasion that they only said yes and came to the table because of Mona. So perhaps the takeaway is it's a man's world, but smart women get things done.
Anthony Azizi Bartlett Sher Broadway Daniel Oreskes drama J.T. Rogers Jefferson Mays Jennifer Ehle Lincoln Center Michael Aronov Oslo play politics