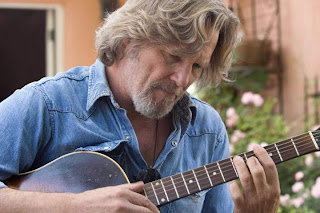 Bad Blake isn’t all that bad, but he definitely ain’t good. Blake is a 57 year old former Country and Western artist whose star is fading. Reduced to playing bowling alleys and lounges while his protégé sells out amphitheatres, Blake is itching for something - maybe another drink, maybe another woman or maybe just another song. He’s worn and weathered and when we meet him, he’s only good on stage. Played to disheveled perfection by none other than The Dude, Jeff Bridges, Blake is a tribute to true artistry overshadowed by acts with nothing but glamour, glitter and gimmicks.

The first thing that struck me about Crazy Heart was the incredible cinematography and the beautiful shots of America out west. Canyons. Blue skies. Open road. It’s all captured in vivid color and epic expanse from the opening of the film all the way to the end credits. From those captivating opening shots of Blake driving to his next gig (he travels in Bessie, his old Chevy, with his guitar, amp and a great big cowboy hat) Jeff Bridges takes us on Blake’s journey from washed up to inspired to getting on. Along the way, he deals with that other drink, that other woman and that other song, all with mostly satisfying results.

Because this is a movie and because, save for fearless indie character studies, movies are usually about what happens to the storyline rather than the characters, the film seems to gloss over some of the more emotionally heavy scenes or situations; it’s almost as if the creators put in just enough emotional heft in various scenes to suffice without really digging into anything. That’s not to say that you don’t feel for the characters or get to know them - you do. (Mostly because of the across-the-board stellar performances.) And while watching the film I actually didn’t think that this movie that was going by at a quick clip was shallow. When the credits rolled, though, and I saw that this was based on a book, I began wondering what was left out - what character development (or devolvement, as the case may have been) was left out in order to move the plot forward for movie audiences. (This was my problem with last year’s Revolutionary Road. As its own movie it was good - Leo gave the best performance of his career to date, and Kate Winslet was great, but there was so much rich material from the novel that was missing - material that made a big difference in the tone of the film and our affection for the different characters.) I’m now very curious to read the eponymous book by Thomas Cobb. (Unfortunately, it’s not in Amazon.com’s stock…)

All that said, I liked the movie and would definitely recommend it. Maggie Gyllenhaal gives a mature and strong performance that makes her character better than the pushover she could have been in a lesser actor’s care. Colin Farrell puts on a great southern accent (he’s never quite mastered a New York accent, in my opinion) in the supporting role of Tommy - Bad Blake’s protégé. He does his own singing, too, and he’s pretty good. The movie rests, of course, on the seen-it-all shoulders of the always terrific Jeff Bridges. His face is a map of the world and it’s a pleasure to let him guide you on Blake’s journey. When Blake has moments of clarity and Bridges opens his bright blue eyes his tenderness shines through, though his scars never go away. Bad Blake is wrecked and looking for redemption. And you can hear it in his songs.

Revered music man T. Bone Burnett wrote the original music for Crazy Heart, including the title track. These are country songs so there’s a twang in there but, like true country, the songs are steeped in haunting blues riffs. The lyrics are raw and honest, also like blues, and I challenge most of the pop sensations to write anything quite as affecting. I’m sure the songs sounded great when Burnett demoed them, but as sung by Bridges they’re spine chilling. Bridges’s singing voice sounds like it’s been soaked in whiskey and smoke; like he is someone who knows better but doesn’t act it. This is all to say his voice sounds authentic when singing Blake’s songs. By and by, The Dude abides.

Crazy Heart, particularly Jeff Bridges’s performance in it, is getting lots of love this award season. Festivals and critics are praising the film, the songs and The Dude. Bridges is nominated for both a SAG and Golden Globe. Look for him to win the SAG and then bag an Oscar nom (and, if industry rumblings are to be believed, win it, too!)
movie