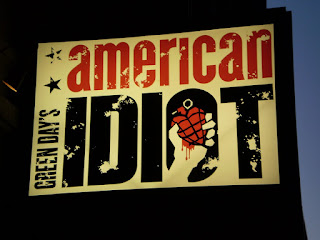 American Idiot on Broadway is truly awe inspiring. I am overcome with emotion when thinking about the fact that the most important record of my generation remains in the zeitgeist and is now the most important show on Broadway. People from all over – and from right here in New York City – can experience this beautiful piece of art, hopefully for many years to come.

After seeing the show in Berkeley and connecting to so many aspects of it so deeply, I was worried that the hype I had built up would supersede the reality. No worries here! American Idiot made a seamless transition to Broadway, losing almost nothing in the process and gaining thousands of more fans. The St. James theatre (which fans have taken to calling the St. Jimmy, in honor of one of the show’s characters) is much larger than the Roda Theatre at Berkeley Rep and at moments here or there I missed the intimacy but the St. James is so shallow that you’re still pretty close to the action no matter where you sit.

I’ve already written at length about the themes in the show and why it is so important so here I’ll focus more on the execution of the show. Watching the terrific new musical for a second (and third…) time, I was able to focus on lots of great details. I noticed just how good the choreography is and how integral it is to telling this story. The

convulsive, pulsating movements allow the actors to tell the story using their bodies (like a good Jerome Robbins ballet!) The choreography is such that the actors literally rage against the machine and reject the “subliminal mind-fuck America.” They push and pull to and from each other, their surrounding and society. I found remarkable how powerfully the story comes across, given that the book is so thin, and I realized that it’s because the choreography truly expresses the narrative. Without such expert choreography from Steven Hoggett and careful and passionate direction from Michael Mayer, this would just be a concert on a Broadway stage. Instead, it is a fully realized journey of three disenchanted young men and their urge to break out on their own and against the confines of the establishment. When, at the end of the show, Johnny (the character) talks about “my rage, my love, my town, my city,” it’s elegiac, poignant and, because the narrative has been so clearly laid out and the characters so fully developed, we know it’s also the perfect ending to a journey that has come full circle.

The projections, by Darrel Maloney, are also noteworthy. The city envelopes Johnny and the other lost boys during “Boulevard of Broken Dreams” and when the papers fly up the wall during the beautifully poetic “Wake Me Up When September Ends,” you feel like you’re seeing everything the characters are singing about. Christine Jones designed a hectic playground for the Idiots, complete with a jungle gym, a seesaw and swings. It’s amazing how much space they have in which to play when, at first glance, it looks saturated. All 19 performers and the band fill up every nook and cranny of the stage to bring you this tale of discovery.

Once again, I was moved by the immense impact female vocals had on these songs I’ve been listening to for six years. “Letterbomb,” a song of female empowerment – or really empowerment in

general – raises the bar for the 11 o’clock number. The women take over the stage and demand your attention. It’s undeniably powerful. And the one-two punch of "21 Guns" followed by "Letterbomb" rips me to pieces every time. While I’m reiterating highlights, I must also mention the lush orchestrations and arrangements created by the incomparable Tom Kitt. But it’s not just what he added in his orchestrations – it’s what he took away. During "Boulevard of Broken Dreams," he strips down the beginning so it’s just this dirty thump from the bass drum that reverberates throughout the core of everyone on stage and in the audience. Kitt is arguably the best composer of our time and definitely the best currently represented on the boards. (Don’t forget: He wrote the score for the electrifying (and Tony and Pulitzer Prize winning) Next to Normal!) 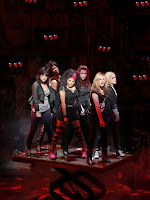 The entire cast is solid and each of them has a moment to shine. (I’m thinking in particular of ensemble member Theo Stockman, who relishes juicy character bits!) Rebecca Naomi Jones, as Whatsername, is engaging and haunting and beautiful and amazing. (I’ve developed a little girl crush on her!) She was actually out the night I saw American Idiot in Berkeley so this is the first time I had the pleasure of watching her on stage. What a powerhouse! Her role is terribly underwritten but that doesn’t stop her from creating a dynamic, round character, who loves, loses and comes out on top. Johnny’s best friends are Will and Tunny, played here by Michael Esper and Stark Sands, respectively. Sands replaces American Idiot Berkeley alumnus Matt Caplan. Sands looks a little young and I missed Caplan’s stage presence, but Sands has a good voice and adds a layer of wonderment to Tunny that works very well. Esper is great as the little engine that didn’t. The original plan was that Johnny, Will and Tunny would break out of Jingletown (the Oakland-East Bay area) in search of an adventure. The plan hits the skids when Will finds out his girlfriend is pregnant and he must stay home. Will proceeds to sit on the couch on stage for the duration of the show, even when the action is miles away. I love this because it speaks to his character: He’s missing out. He’s watching the action from the sidelines and settles into a lackadaisical life, despite his pent up yearnings. Esper nails the boredom and vacant stares. He has a beautiful falsetto and an extremely powerful, pleading and manly voice. Tony Vincent is chillingly good as St. Jimmy, Johnny’s demons incarnate. And Christina Sajous and her lovely voice are extraordinary as The Extraordinary Girl. (This marks the native New Yorker’s Broadway debut!)

No review of American Idiot would be complete without a standing ovation (or whatever the written equivalent of that is) for John Gallagher, Jr. I gushed (and then some) about him in my Berkeley review so for now I’ll say this: He is an actor of immeasurable talent. He puts every ounce of his heart and soul into each performance. He is charming, heartbreaking, riveting and truthful. He is passionate. Simply put, he is the best.

Dear readers, you must experience this for yourself. (Come visit me and I’ll gladly guide you to the St. James.) American Idiot is an honest, raw and provocative show that grabs hold of you from the very beginning and doesn’t let go until it’s rocked and rolled its way through your soul.


(I can’t stop kvelling over American Idiot, so here’s 500 more words on the subject:
It was the most important record of our generation. And now it’s the most important show on Broadway. It’s anachronistic and totally modern at the same time. Anachronistic in the sense that it’s doing exactly what Thespis stepped out onto the stage at the Theatre Dionysus to do: To express human emotion. To express something that was going on in the zeitgeist that people were feeling. To express what the people felt inside - the rage, the love, the confusion, the passion. An artist expresses these emotions in a way that is beautiful, and in a thoroughly selfless act shares them with the people to say, “You’re not alone. I feel this too.” And it’s modern in that it’s rock and roll. It acknowledges the advancements - for better or worse - in technology that have made our society what it is. It doesn’t take place in a bubble. It takes place in the here and now. And now, the record is treated to a truly awe inspiring interpretation. The fantastic record now has these lush, evocative orchestrations and vocal arrangements. And female vocals. I can’t say enough about how powerful these songs become - especially “Letterbomb” - when sung by a woman. And what voices. The voices in the show are stirring and haunting and inescapable - and those are all beautiful, good things. The voices are full and rich and layered and dare you to not feel something. When I first heard this record, I thought, “Someone understands. Someone else knows my frustration.” American Idiot is a story of people who want to break out. People who need to search for something more beyond what’s right in front of them because they know there’s more out there. This is a show for anyone who ever was told to act a certain way or was pigeon holed into a persona. This show empowers people to stand up. To say, “No. I’m not okay with this.” Whether they are standing up to political pressures, pressure from parents, other family, friends, partners - whatever. American Idiot says, “It’s okay. Go explore. Be who you are - don’t make apologies. Don’t accept something just because your parents or your government or society told you it’s so. Question. Make your own way. Search. Seek. Be satisfied” Sometimes, you’ll come up against walls. Giant walls. And sometimes what those people told you will be true - but know for yourself. Go out and see the world. See what life is about. This isn’t meant to incite riots or mutiny or anarchy. It’s meant to empower you to seek out the best life available to you. American Idiot is a call to arms. Don’t let things happen to you - make them happen. Don’t become complacent. There are better things out there. Don’t let other people make your decisions. “Decisions are made by people who show up.” So show up! Show up for your life. Be present. Exaudio, comperio, conloquor: To listen; to learn; to speak. That’s what American Idiot is about. Listening. Learning. Speaking.)
American Idiot Broadway john gallagher jr rock and roll theatre