A Cool Dip in the Barren Saharan Crick 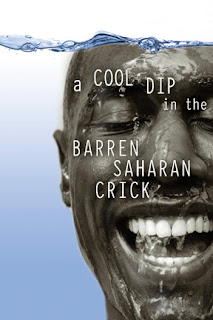 For a barren crick, A Cool Dip… found plenty of water with which to torture me. This new play (that ended its world premiere limited run on Sunday) is tedious, unfocused and preachy. None of those elements – alone – make for good theatre and the combination of all three made me itch to get out of the Sahara and back on the streets of New York.

Kia Corthron’s new play is about water conservation and religious fervor. Both of these tracks would be interesting to explore, but Corthron over reaches here, making her effort palpable and creating slogan-spewers instead of characters. All the people in the play seemed to be talking at each other, not to each other. And when they spoke, the dialogue was totally unnatural; there was no familiarity with language. At one point, one of the characters said, “When they go home to anecdote this to their spouse.” That doesn’t quite roll off the tongue. And I’ve never heard someone use “anecdote” as a verb. I happen to be a fan of language (hello, I love Aaron Sorkin and I pored over the usage dictionary entry in David Foster Wallace’s Consider the Lobster!) But this kind of trying-to-be-elevated language didn’t work here for two reasons: One, it sounded stilted and the actors seemed uncomfortable with it; and two, the characters weren’t supposed to be highly educated academics or linguists; they were regular people in Mississippi. I didn’t expect them to talk like they’d just fallen off a turnip truck or never finished fifth grade, but the language they did use just didn’t seem to fit the characters’ lifestyle. (I thought I heard the characters say they were in Mississippi. In his review for the NY Times, Charles Isherwood places the action in Maryland. Either way, the language didn’t work.)

On top of the language barrier, this play was unfocused. The playwright seemed to be trying to get messages across about a few different things, water conservation, religiosity and relationships, but instead of focusing on one theme and exploring the deep well of material that any one of those three can provide, she flitted around from topic to topic and failed to mine anything meaningful out of any of them.

The slow moving first act was followed by a second act that moved a little quicker, but mostly because the penultimate scene was trying to be an episode of Perfect Strangers, which seemed to betray the tone of the play – the seriousness of the play – up to that point. As the second act delved more into relationship territory it lost some of its preachiness, which was good, but the dialogue was still clunky and because the first act was such a struggle to sit through, I didn’t really care what happened in the characters’ relationships.

The only silver lining was Keith Eric Chappelle as Tich. Appearing only in the second act, Chappelle’s Tich was a regular guy. The character seemed mostly written that way but judging from the rest of the play, I think it was more Chappelle’s interpretation of the role and his line reading that made Tich relatable and palatable. This is not to say the other four actors were bad, but that they struggled with Corthron’s uneasy speeches. Overall, I say skip the Crick.
off-Broadway theatre