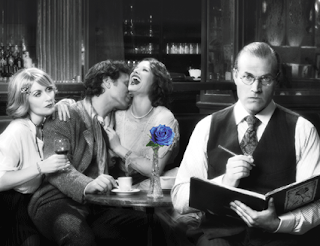 Dadaism is a theatrical form that had a heyday beginning in the early part of the last century. It’s meant to be chaotic and kick “viewers” out of their comfort zones. Remnants of Dada can be found in avant-garde performance art pieces. It’s not particularly my cup of tea, which is probably why I didn’t really like Second Stage’s production of the original musical, The Blue Flower.

This musical, written by Jim Bauer and Ruth Bauer, and directed here by Will Pomerantz, focuses on artists and scientists over a period of time, beginning before the Great War and leading up to World War II. It’s told in a flashback, with lots of narration. There are all sorts of characters (in the figurative sense) and more than a little bit of chaos. (It struck me as the kind of musical auteur writer/director Rian Johnson (The Brothers Bloom) would make if he wrote a musical.)

The story about relationships, first a two-sided bromance, then a love triangle and then a bunch of different configurations, is interesting but too familiar to be compelling. And the narration (used both to move along the story and also in lieu of super titles – the main character, Max (Marc Kudisch) speaks in his own made up gibberish) took away from any character development that might have been there. It was very difficult to become invested in these characters and care about what happened to them. I suppose this is part of the point of the art form – you disassociate from the emotion to focus on the message – but it didn’t work for me.

Bringing The Blue Flower to life is a mixed bag of a cast. Marc Kudisch has a wonderful voice, which he shows off here. He also shows off a zest for letting loose and doing schticky bits. As Maria, Teal Wicks was forgettable. She lacks stage presence, and she always seemed to disappear on stage. She has a nice voice, but I only noticed her when the direction forced my attention toward her. Sebastian Arcelus impressed at Franz. I had never seen Arcelus on stage before, but I liked his voice, and thought he presented one of the few fully formed characters in the show.

This is an ambitious production for Second Stage, using paintings/collages, film segments (to better effect than in All New People) and an orchestra on stage. Though I didn’t care for the ride, I can appreciate the nuts and bolts used to create the carnival. Beowulf Boritt’s scenic design offers a fairly bare bones playground for the cast (which also includes Meghan McGeary, Joseph Medeiros, Julia Osborne and Graham Rowat), and Aaron Rhyne’s projection design helps to meld the theatre elements with the filmed ones.

Credit must also be given to the composers. I was pleasantly surprised that in this musical, the original music actually sounded original, and not derivative. As we neared the end of act one, I thought the score had a bit of a multiple personality disorder, but by the end of the show I realized its “mood swings” were timed with specific plot turns, and therefore made sense.

The Blue Flower is an experimental piece of theatre. I think it’s good that such theatre is being put on stage, and, again, I can appreciate and recognize the craft – I just didn’t take to it.