When my friend and I settled into our seats at Second Stage Theatre for a preview of Zach Braff’s All New People, I listened to the pre-show music and told my friend, “Finally, a Zach Braff project with music that doesn’t make me want to kill myself.” Unfortunately, the protagonist in All New People didn’t feel the same way.

We meet Charlie (Justin Bartha) as he is about to off himself using a taunting orange extension cord strung up from the high ceiling of the Hamptons summer home in which he’s hiding out on a cold and snowy winter day. An absent minded real estate agent, Emma (Krysten Ritter), barges in, thinking the home is unoccupied and therefore ready to be shown. She helps Charlie down from the noose and calls her firefighter buddy Myron (a sharp David Wilson Barnes) to come assess the situation. Later on, the high-priced escort Kim (Anna Camp) arrives, courtesy of one of Charlie’s friend.

This situation has the makings for either wonderfully absurd comedy or devastatingly cathartic pathos, but unfortunately we just sort of sit in some limbo, dangling, like the extension cord, over the situation, never plugging into a potent, truthful outlet.

If you’ve seen Garden State or pretty much any other Zach Braff project, you know Charlie: He’s 35 and, like a newsstand, he has issues. In yet another example of Braff putting his therapy on stage, All New People comes off as unfocused, unnecessary and contrived. Indeed, once the curtain rang down, my friend and I turned to each other and asked, “Why did I need to watch that?” It wasn’t nearly entertaining enough to just be entertaining. (There were definitely comedic moments, and it was interesting enough that I wasn’t fidgeting the whole time, but it didn’t satisfy the entertainment quota.) And it wasn’t a message play; it wasn’t a “think piece” that left me pondering existence or politics or some other big-ticket life item. (That may have been what Braff was striving for, but he didn’t achieve it.) Instead of making a strong showing in one of those categories, it limped along (for too long, in my opinion) on the path to both.

I think for me, the biggest problem is that I wasn’t at all invested in the characters so I didn’t care what happened to them throughout the play. When big bad secrets were revealed, I literally rolled my eyes and guffawed. Charlie could be a really interesting character, but before we get a chance to know him, Emma the chatterbox comes in and elicits nothing but antipathy. (Moreover, Ritter’s English accent was horrid and uneven and her voice was shrill, making listening to her an arduous task.) I started to care about Charlie and Myron the more they interacted, and I became hopeful that this wasn’t a total bust. But then the ending came (about ten minutes and 17 plot twists too late) and it felt so forced that I simply felt nothing.

Moreover, I must tell you that film segments are interpolated throughout the play. At first, I found this jarring, especially because the content of the first film segment seemed so out of left field (and it was about Emma, who I already didn’t like). The next two worked for me; they allowed Braff to tell some backstory and further develop the characters. But even with these two, as well as the final segment, I felt like they showed a lack of theatrical understanding and creativity.

During a post-show discussion, I asked Braff about the choice to show those pieces of the story on film rather than on stage. He gave me two answers. The second I liked: he said that he thought it would be interesting to have a close up of the actors. You can’t show a close up of an actor on stage, it just isn’t technically possible. So by using film, he allowed the audience to see the actor close up, to see something intimate revealed and then delve back into the action on stage. I found this to be an interesting perspective. 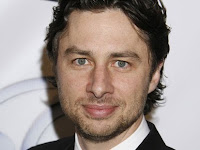 But his first answer was unsatisfying. He spoke about knowing film best and wanting to use a medium in which he was fluent, sort of like a security blanket. During the final film segment (which was reminiscent of the opening scene of Beau Willimon’s Spirit Control), we see a very literal recreation of the story Charlie is telling on stage. Here, I was reminded of another play I saw at Second Stage, Wings. You may remember that I thoroughly disliked Wings, but I did like what director John Doyle said about the sparse set: It’s the abstraction that makes it more real. I was actually mad at Braff and director Peter DuBois for hitting me over the head with their images rather than letting me fill the abstraction. I wanted to watch Charlie and Myron talk, downstage center, in a heated discussion, about the cloud hovering over Charlie; I wanted to watch, listen to their words and use my empathy to fill in the imagery. Instead, I saw Zach Braff’s security blanket projected on stage.

To end on a positive note, I’ll tell you that I was very impressed with Anna Camp’s performance as Kim. As Camp played her, Kim was not a one-note, know-nothing hooker. Sure, she was dim and subscribed to some totally nutty syllogisms, but underneath there seemed to be a shrewd woman who was in control of her life. I appreciated the layered performance. I also really enjoyed David Wilson Barnes, as expected. He was scintillating in Becky Shaw, also a Second Stage production, and though he said nothing, he was riveting in a reading of Adam Rapp’s Welcome Home Dean Charbonneau. He didn’t disappoint here, bringing to life a fuller and more complex character than what was on the page.

Granted, I saw this in previews, early in previews, at that, so Braff, DuBois and company are still working on the show. I think that if Braff’s focus is reined in, and he decides whether this is meant to be a character study or a plot-driven play, it could work. I’m not sure it could be great, but in the age of revivals and adaptations, at least it would be an all new play.