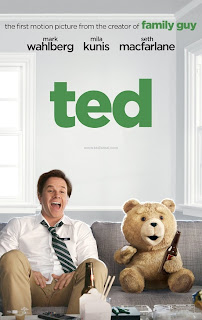 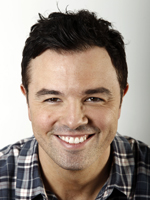 Ted is hilarious. Some of the humor is smart wordplay; some of it is crass or otherwise politically incorrect; but all of it seems to really come from the heart. Making his feature film debut, Family Guy creator Seth MacFarlane directed and co-wrote (with Alec Sulkin and Wellesley Wild) this laugh-out-loud funny and endearing film.

At its core, Ted is a story about a man, his best friend, and his girlfriend. The relationship dynamics are actually pretty commonplace, things you wouldn’t be surprised to see on a sitcom. The difference, of course, is that John Bennett’s best friend is a fully alive teddy bear, Ted (voice by MacFarlane).

Ted mixes elements from several film genres, but it’s incredibly funny and it’s all done well so you don’t mind the sometimes silly twists and turns. Ted is also aided by some unexpected but understatedly funny cameos and pop culture references (many of which went over the heads of the obnoxious teenagers sitting next to me).

The other thing I really liked about Ted is that the girlfriend, Lori (Mila Kunis of Black Swan and That 70s Show), is a strong woman with her act together, not one of these awful, mildly functioning nitwits so often seen in "romantic comedies" (that are often neither romantic nor comedic). Kunis develops a nice chemistry with Mark Wahlberg's John, the 35-year-old man who still needs his teddy bear by his side during a thunder storm. (I suppose you could make the case that a woman who tolerates this isn't strong and doesn't have her act together, but I disagree. And that's part of the conflict in the movie.)

If you’re looking for the funniest movie of the summer (hell, we’re half way in so maybe even of the year) look no further than Ted. I promise you'll be convinced of its hilarity in the first two minutes.


Visit tedisreal.com for lots of fun content, including the "Thunder Buddies" song.