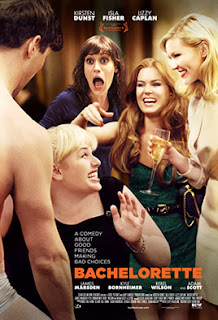 The film adaptation of Leslye Headland’s Bachelorette, which the playwright wrote and directed, succeeds in its own ways. It’s just as biting and darkly funny as the play (which ran at Second Stage a few summers ago). Because there’s no concern for scene changes, it takes the story and characters to places that a play can’t. The three bridesmaids collective journey is essentially the same - they just take different detours here.

I was a little disappointed that the movie tagged on a bit of a tidy, Hollywood ending. My preferred ending happened about seven minutes earlier, serving as a cheeky punctuation mark and driving home Headland’s gluttony theme. (Remember that the play Bachelorette is part of her seven deadly sins cycle. The "greed" play, Assistance, was satisfyingly sardonic.) Still, it is rip-roaringly funny with spot on performances from the terrific ensemble cast.

A quick rundown of the plot: Regan (Kirsten Dunst), Katie (Isla Fisher), Gena (Lizzy Caplan) and Becky (Rebel Wilson) have been best friends since high school. (They graduated in ’99.) Becky, whose nickname in high school was Pig Face (on account of her “homely” looks and plumper figure), is the first to get married. The movie opens with her telling Regan, the maid of honor, the news, and the riot that ensues is the bachelorette party gone wild. 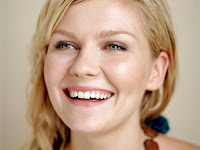 Isla Fisher is crazy silly as party girl Katie; James Marsden plays against type and is oddly seductive as the aggressive and douchey Trevor; Rebel Wilson holds it together as the bride to be, Becky; Kyle Bornheimer elicits sympathy as Joe, the nerdy guy who got cool; Lizzy Caplan and Adam Scott (who were so great together on Party Down) sizzle as old flames Gena and Clyde; and Kirsten Dunst reminds us she’s still here, and she’s good. She is pitch perfect as the worst best maid of honor, Regan (yes, as in King Lear’s daughter).

Headland’s Regan is the most strongly developed character, but Headland lets Gena have all the fun, pontificating on myriad concerns of varying import, like when she explains to Katie the two different kind of guys and the way they have sex, typified by Brian Krakow and Jordan Catalano from My So-Called Life. (There are tons of pop culture references, mostly to beloved (for whatever reason, with or without irony) anachronisms of the mid- to late-nineties.

Since I didn't love Bridesmaids, I suppose my telling you, dear readers, that Bachelorette is better than that movie doesn't mean much. But it is. It's smarter, sharper and wittier. It's raucous and feisty, and the characters, though hardly admirable, are thoroughly fascinating. And watching Kirsten Dunst almost lick a New York City sidewalk is kind of boss.