The Newsroom
What an incredible episode. (Go Inside the Episode with Aaron Sorkin.) I can't wait for part two! What I found was so interesting about "Tragedy Porn" is that we're seeing this team we have come to admire do something so seemingly beneath them. We're seeing them do a big thing badly. And it elicits newly found sympathy for some real life news teams because it makes you think that some of the anchors really want to be doing News Night 2.0, i.e., good, informative stories that matter, not news as entertainment, but their hands are tied because they do, after all, have network bosses, ratings analysts and shareholders to answer to. Plus, the episode brought us some great lines, like "There's not enough bourbon in Kentucky."; "Have you been listening? Because we have."; and the show-closing punctuation, "I didn't know we had that kind of comic timing." Below, take a look at next week's episode, "The Blackout Part 2: Mock Debate" (the penultimate episode of the season, which, unless my eyes deceive me, features The West Wing alumnus Adam Arkin), and beneath that find a couple of bonuses, including a Q and A with Aaron Sorkin. 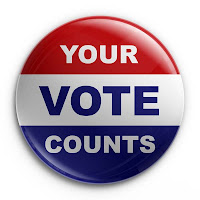 Election Update
Over the weekend, we learned that Wisconsin congressman Paul Ryan will be presumptive Republican presidential nominee Mitt Romney's running mate. (It's a choice that, oddly, galvanized both Republicans and Democrats, as Jon Stewart pointed out on The Daily Show.) My first reaction was to become ill thinking about Ryan's policy positions. Then Tim Dickinson of Rolling Stone pointed out The Five Fatal Flaws of Romney's Ryan Veep Pick. Most telling, and what we might all want to be most incensed about, is Dickinson's closing paragraph: "But at least the Koch brothers appear happy with the choice. Their dark-money group, Americans for Prosperity, announced a $27 million ad buy on Ryan's signature issue, the debt, four days before Romney announced his running mate to the general public." Who's running this election? (Remember: visit Rock the Vote for information about registering to vote and making your voice heard - including what the voter ID laws are in your precinct - on Election Day.) 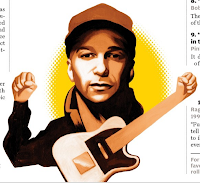 Furthermore, in a Rolling Stone op-ed exclusive, Rage Against the Machine's Tom Morello adroitly calls out Paul Ryan for his professed love of Rage's music. He says, "Paul Ryan is the embodiment of the machine our music rages against," pointing out the irony of Ryan liking Rage, much like the irony of Charles Manson loving The Beatles and Chris Christie loving Bruce Springsteen. Morello continues: "Don't mistake me, I clearly see that Ryan has a whole lotta 'rage' in him: A rage against women, a rage against immigrants, a rage against workers, a rage against gays, a rage against the poor, a rage against the environment. Basically the only thing he's not raging against is the privileged elite he's groveling in front of for campaign contributions." Bravo, Mr. Morello!

Green Day Sneak Peek
Listen to one track off the band's upcoming trio of albums, Uno! Dos! Tre!, "Kill the DJ." In Rolling Stone, Billie Joe Armstrong says of the song, "[Bassist] Mike [Dirnt] asked me to write a song with a four-on-the-floor rhythm. I'd never done it before. It's kind of like Sandinista!, Ian Dury's 'Sex + Drugs + Rock and Roll' and the Tom Tom Club song 'Genius of Love.' We were trying to figure out how to make dance music without turning into a dance band." (Bonus: Green Day also released a video for "Oh Love," which we heard a few weeks ago. Check it out on Rolling Stone.)

The Book of Mormon on Tour

The first national tour of the Tony Award-winning and mega hit musical The Book of Mormon is officially under way. With Gavin Creel (Hair) as Elder Price and Jared Gertner (...Spelling Bee) as Elder Cunningham, this touring company is sure to thrill audiences all over North America, just as it continues to do here in New York. The tour began in Denver, CO, on August 14 and continues through summer 2013, making stops in Seattle, Boston, Washington, DC and more along the way. (Interestingly, there are currently no dates in Orlando...) Visit bookofmormonthemusical.com to find out when the Mormons (and Ugandans) will say "Hello!" to your town.

Summer Movie Fun
As you may know, dear readers, I don't tend to see many movies in the theater, but this summer I've seen, thus far, four! (Well, technically, three in the theatre and one at home on demand - but it's a first run movie and it's going to be in theaters in September.) And with Joseph Gordon-Levitt's Premium Rush and Looper on the way, I just might find myself in a multiplex again before Labor Day. In case you missed them, herein are my reviews (in the order in which I saw them):

Michael J. Fox Back on TV?
That's the buzz. According to the Vulture report, America's favorite fake Republican and time traveler might be headed back to television on a regular - not guest starring - basis. (You'll remember that Fox has appeared in several episodes of The Good Wife, even earning an Emmy nomination for his work.) Vulture reports that the new series is loosely based on Fox's life, and is to be directed by Will Gluck, the mastermind behind Easy A and Friends with Benefits. Stay tuned for details!

Arrested Development Updates
The Bluths are back, and the show's narrator, Ron Howard, recently visited the set of the fourth season and spilled some details. Of the approach to this new season, Howard said, "It's been away for a while, and part of the fun that Mitch [Hurwitz, the creator] has been mining and exploiting is, what's new to discover about these people? What's delightfully unchanged?" The fourth season of the hilarious show premieres on Netflix in 2013. Rolling Stone has more. In addition, Vulture reports that John Slattery (Mad Men) is joining the cast.

Adam Chanler-Berat's Dressing Room
The Peter and the Starcatcher star invited Broadway.com into his dressing room to show off five of his favorite things. Take a look: