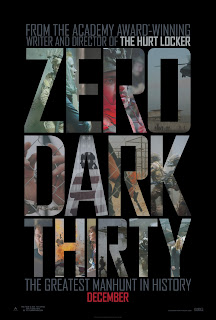 Word on the street is that director Kathryn Bigelow and screenwriter and former journalist Mark Boal (the pair that brought us The Hurt Locker) were working on a related but different film when Seal Team Six killed Osama Bin Laden in May 2011. Bigelow and Boal then shifted focus and received unprecedented access to possibly classified files and people’s stories in order to bring us the true-ish story of “the greatest manhunt in history,” the search for public enemy number one.

Zero Dark Thirty is a gripping tale that is unflinchingly directed and wonderfully acted (particularly by leading lady Jessica Chastain). Though some might find it difficult to watch (there are scenes of torture and many may still be processing the recent history) I found it to be thought-provoking and slightly empowering.

The decision for a nation to deliberately kill someone - even a terrorist - is a complicated one. I remember hearing the news “we’d” gotten Bin Laden and watching President Barack Obama talk about what happened. I felt an odd mix of pride in my country and its leadership and military but also slight embarrassment at the pride because, after all, we killed someone. Should we really be celebrating? These emotions flooded  back as I watched Zero Dark Thirty (the phrase, by the way, is a military one meaning extremely early in the morning), especially watching the flood of emotions expressed on Chastain’s face when she saw the dead body.

We also get to see CIA and other government officials struggling with the sketchy intelligence. After the absolutely-certain-yet-actually-false claims of weapons of mass destruction in Iraq, officials were understandably uneasy about giving the go-ahead for a mission about which a majority of agents were only 60% certain. They talked about the risks of being wrong but, as one official remarked, “what about the risks of not doing something?”

But even the need to do something had me conflicted. The movie begins on September 11, 2001, and efficiently moves through time, showing the key moments that led us to Bin Laden. (For example, we see the appealing Aussie actor Jason Clarke “questioning” a detainee whom he hopes has a critical piece of information. That interrogation will come back some seven years later, playing a pivotal role in the search.) At one point, one of the intelligence officers pleads “we've spent millions of dollars on this and we still haven’t gotten our enemy.”

This got me thinking of Homeland. (I was also thinking about Homeland because, as in the show, in Zero Dark Thirty the expert on our perceived biggest enemy and the one calling the shots is a young woman (Claire Danes on Homeland and Chastain here). More on that in a moment.) In the penultimate episode of Homeland’s second season, Carrie Mathison and crew finally got Abu Nazir, the Bin Laden-like terrorist mastermind that Carrie had been chasing for years. Everyone seemed to feel relief. But then, in the season finale, the CIA itself was attacked, and Sergeant Brody suggested that Nazir being killed and this latest attack was part of the plan all along, that Nazir allowed himself to be captured in order to lull us into a false sense of security. This begs the question that many people asked after we got Bin Laden: are we actually safe now?

In Homeland, Nazir tells Carrie that he and his people are prepared to continue fighting for thousands of years, as long as it takes to right the wrongs they perceive. I can’t help but presume that Bin Laden and his people take a similar view. So just because we got the mastermind behind one terrorist attack does it mean we are safe from all future attacks? I don’t ponder this to make myself or anyone feel less safe, but rather to debate the virtue of tenaciously going after just one person.

That tenacious person leading the charge, we learn in the film, was a young woman named Maya. We typically think of the intelligence and military game as a man’s world, and as much as I try not to focus too much on gender roles, I felt empowered as a woman to know that a woman - a young woman, at that - was calling the shots. As portrayed by Chastain (The Heiress), Maya is strong, intelligent and has killer instincts. She is not an emotional mess and she commands respect from her mostly male and mostly older colleagues. (Theatre veteran Jennifer Ehle (Mr. and Mrs. Fitch) appears as her lone female co-worker.) Her steeliness and resolve throughout make the final frames of the film, with Maya all alone on a military plane, extremely powerful. (And it makes perfectly evident why Chastain is winning awards left and right and gaining lots of Oscar buzz.)

Zero Dark Thirty is certainly not for the faint of heart but it seems somehow important to see this depiction of a true story, almost patriotic to be presented with this version of the truth and to ask questions.