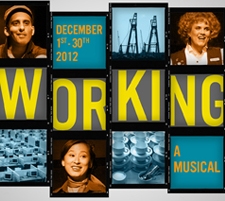 Much like the seminal musical A Chorus Line, Working is a concept musical that is adapted from intimate and illustrative interviews.

As the title suggests, Working focuses on people at work. Mixing interviewees’ words with music, we are exposed to workers’ inner and honest thoughts about their work.

In an interesting production choice, the scenic design, by Beowulf Boritt (If There Is..., Grace), banishes any artifice or opportunities to hide, showing us how the set works. Moreover, the show begins by letting the audience hear the stage manager call light and sound cues, essentially letting us hear her work. The crew also comes out for a bow at the end of the show.

With 36 characters and so many contributors, the results were bound to vary – and they do – but overall it’s an effective show. I certainly enjoyed some vignettes and performances more than others, but as the sum of its parts, Working is evocative and elicits empathy from the audience.

While in different working conditions, similarities and connections are evident among the workers. Many of the workers are hopeful about the future, whether theirs or their children’s; others are regretful for the road not taken. All of them are grateful to be working.

And by the end of the show we realize that  we’re all working, just trying to get by. The show leaves you feeling renewed about the work you do (even if it’s not your dream job) and respectful and sympathetic toward workers in other industries. Particularly poignant are the final moments, the Carnelia song “Something to Point To,” in which the workers express hope of leaving a legacy.

For more information about Working, which runs at 59E59 Theaters through December 30, visit 59e59.org.