Emmy Extras
In case you missed any of it, here's a round up of Emmy coverage:

Joseph Gordon-Levitt Makes Feature Writing and Directing Debut
The talented (and dapper) Joseph Gordon-Levitt (50/50, Looper) has been in the business since he was six. Now 32, the genial artist and Hit Record founder makes his feature film writing and directing debut with Don Jon, which opens today. (He's previously written and directed shorts.) The movie is an exploration of the way our perceptions of reality are altered and clouded by the media. Gordon-Levitt has been making the talk show rounds, and he's lit up the Internet. Some favorite coverage: Buzz Feed brings us 10 more reasons to like JGL, while over on IMDB, the man himself takes over as a guest editor and offers his favorite films in different categories: flicks starring either of his costars, Scarlett Johansson (Cat on a Hot Tin Roof) or Julianne Moore (The Kids are All Right); movies about movies; true romance; and funny people. Don Jon is in theaters nationwide.

Backstage at First Date
This week brought us the final episode in "Kiss and Tell: Backstage at First Date with Krysta Rodriguez." It's been fun to get a glimpse behind the scenes and get to know the talented ensemble. In this final episode, Rodriguez takes us to the Broadway Flea Market, an annual event that, this year, raised $631,222 for Broadway Cares/Equity Fights AIDS. Plus, Rodriguez, Zachary Levi and the rest of the First Date company treat us to the best vlog ending ever! And here are two more First Date flirts, one featuring Rodriguez and another featuring Blake Hammond. Enjoy, and remember that First Date continues its run at the Longacre Theatre. Visit firstdatethemusical.com to learn more and to purchase the cast album and tickets. (And check out this video of Rodriguez and Levi recording one of my favorite tracks on the cast album, "First Impressions.") 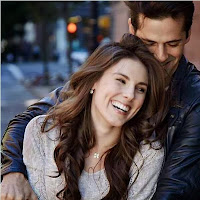