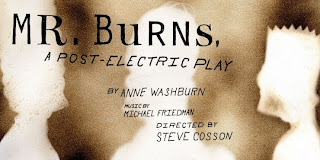 Playwright Anne Washburn said she was curious to see what would happen to one narrative if it kept being pushed from generation to generation, farther and farther from its origin. It’s an interesting concept. It’s sort of like an experimental theatre version of the telephone game. Yet, interesting as ideas might be they don’t always make for the most pleasing plays.

Mr. Burns: A Post-Electric Play is set somewhere “near” and sometime “soon,” as it says in the Playbill. We open on a handful of people, survivors of some apocalyptic terror that has forced them to band together. (Ms. Washburn keeps the details of the disaster vague.) They are finding comfort and commonality by recounting their favorite Simpsons episodes. It might seem like that’s a rather superfluous way to pass the time when the world has imploded, but, as we learn in all three acts, it’s how people survive. Sharing an experience helps them heal.

The second act checks in on the same group of survivors, plus one more, seven years later. The survivors are now a troupe that reenacts Simpsons episodes (there’s rival troupe that is spoken of but never seen), interpolating commercials and pop song medleys throughout. With the wounds from the disaster still fresh in their minds – they are not yet even a generation removed – they make a point to be precise in their reenactments and recreations. They buy lines from others who remember them, and allow no room for artistic interpretation. Clinging to the exact memories helps them heal.

Act three begins 75 years after act two. We are now multiple generations removed from the initial survivors, none of whom are present. The entire act is a play within a play, the next incarnation of culture: musical theatre. A different troupe of actors presents a musical version of the same Simpsons episode the folks in acts one and two had been focusing on, only this time, as they are farther removed from the original material and are at an entirely different place on the healing spectrum, they allow themselves to interpret and offer commentary on the material. Their theatrical version of the “Cape Feare” episode takes liberties with the original story and provides a moral. This is how they heal.

The show within a show teaches that in the post-electric age, when everything is gone you have nothing but opportunity. We see, as Washburn wants us to, that artifacts—cultural or otherwise—are not static but in fact change along with the culture and people; we adapt them to suit our needs.

Again, Washburn delves into interesting stuff and I like thinking about it and I enjoyed the post-show discussion I attended, during which Washburn elucidated her point of view, but I can’t say I liked the play (which has music by Michael Friedman (BloodyBloody Andrew Jackson).

Mr. Burns (directed by Steve Cosson) took some effort to sit through. Not that I was fidgety or wishing it would end (as I’ve found myself during other shows) but the tone kept shifting; the rules of each world/act took time to understand; the relationships were difficult to discern. It was difficult to get through the parts, but looking back at it as a whole I found value and meaning.

And I suppose that’s OK. Just as the characters (played by an ensemble that includes the terrific Matthew Maher (The Flick)) take time to sort through their feelings and figure out their place in this new world, sometimes as theatergoers we have to sort through a theatrical experience, have to look back on it to understand it.

If you do see Mr. Burns (and I recommend it for adventurous theatergoers, whether or not you know anything about The Simpsons), make sure you arrive early so you can hear the pre-show music. Riffing on the theme of reinterpreting pop culture and shared experiences, the pre-show music is a collection of unexpected covers: an orchestral arrangement of Lady Gaga’s “Bad Romance”; an indie rock slow jam of Beyonce’s “Single Ladies”; a punk take on Des’ree’s “You Gotta Be”; and more will get you in the mood for something different and unexpected.

For more information and to purchase tickets visit playwrightshorizons.org.
off-Broadway play The Simpsons