The winners for the 66th annual Emmy Awards have been announced. Seth Meyers was a funny and effective host, with entertaining bits peppered throughout. But before we get to the winners, let's talk fashion! 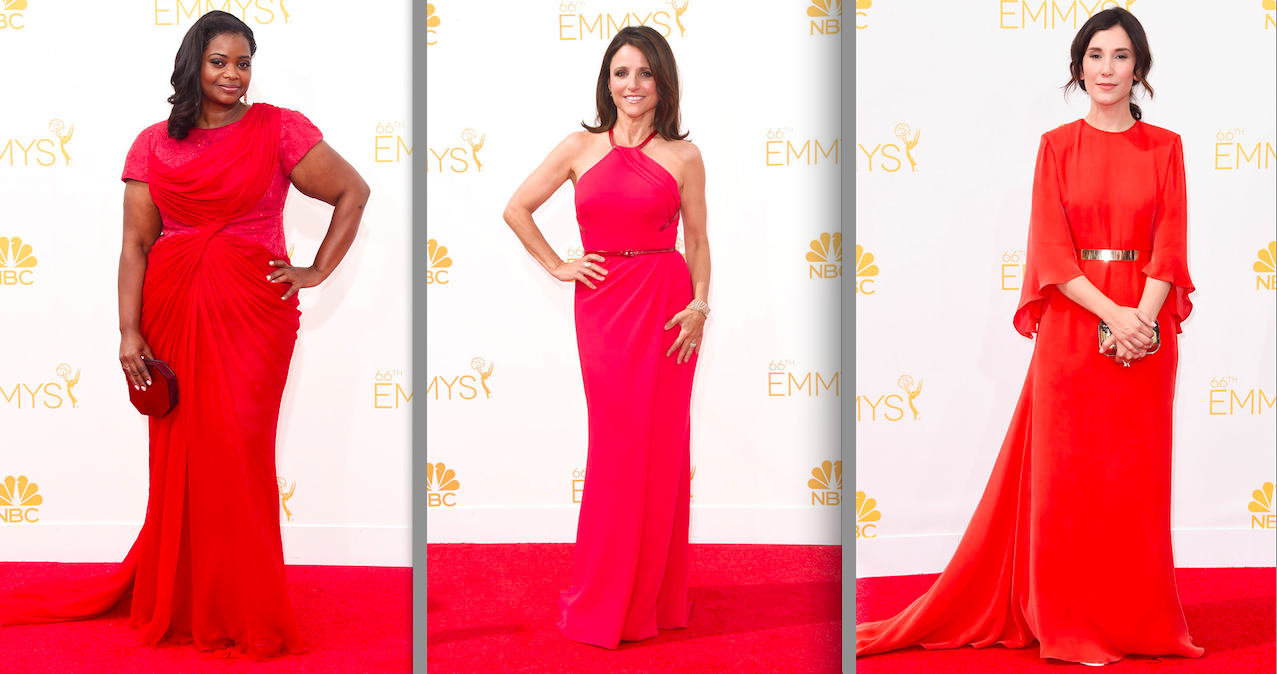 Let's begin with the night's biggest trend: ladies in red. On top we have Octavia Spencer in a Tadashi Shoji dress that accentuates her curves. Stunning in the middle is perennial red carpet stand out, Julia Louis-Dreyfus, in Carolina Hererra. She looks glam yet comfortable, an uncommon combination. On the right is Games of Thrones' beautiful Sebel Kekilli. Below are three talented young ladies, beginning with Claire Danes in Givenchy. Danes would be a Best Dressed nominee were it not for that monstrosity around her neck. In the center is (the should have been nominated) Mindy Kaling in a Kenzo dress. Kaling said on social media that this dress was custom made by the designer, and that Kenzo doesn't usually design gowns. Our final lady in red is Mad Men's Christina Hendricks in Marchesa. 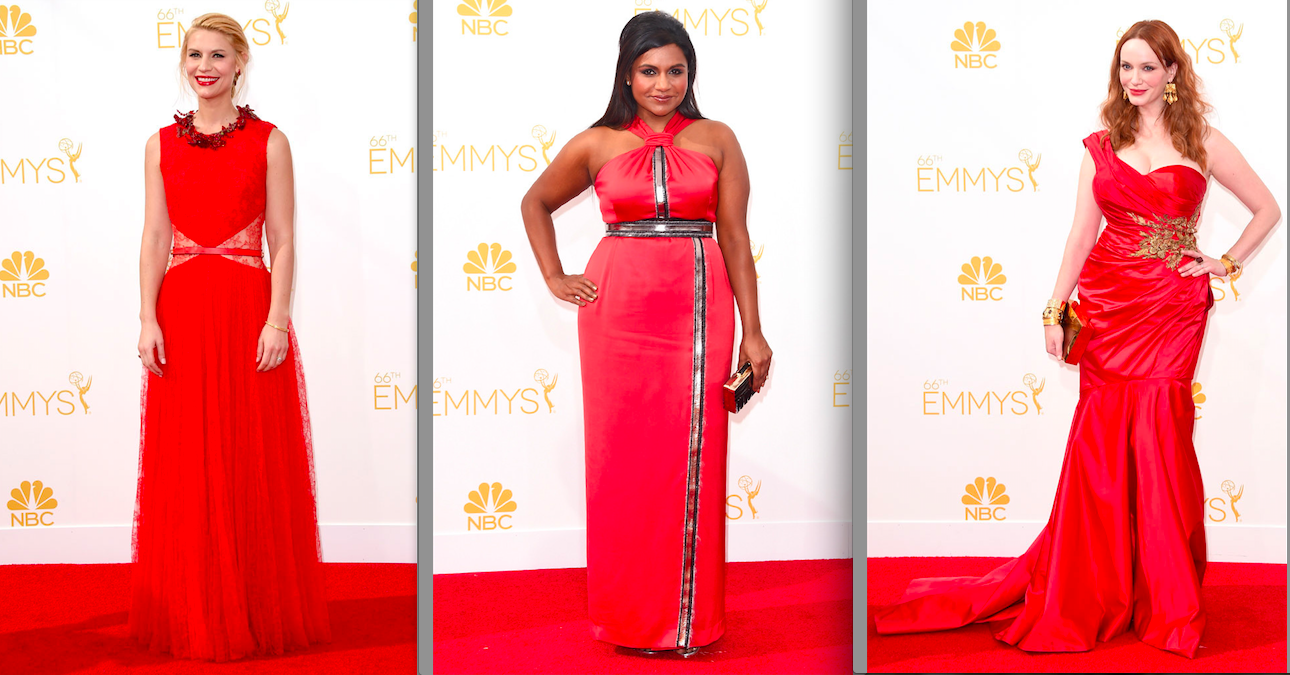 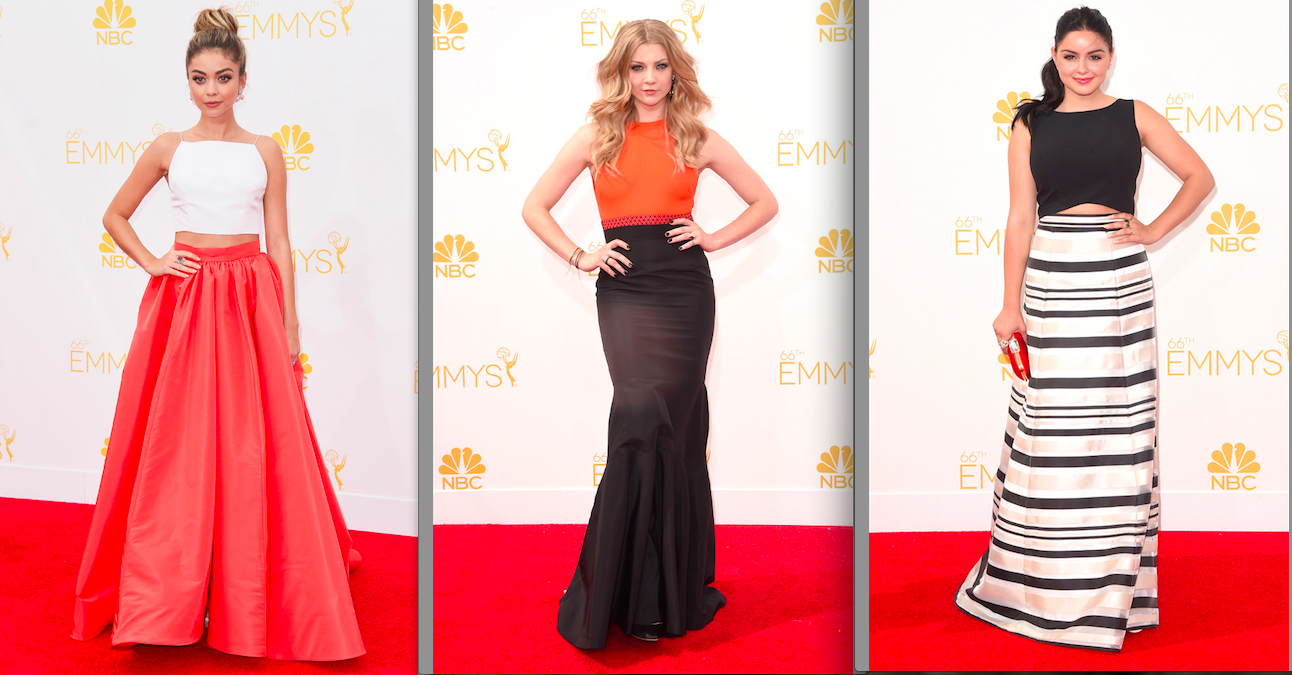 Three might not be enough to call it a trend, but these three rising starlets rocked the color block look.  In the center is Game of Thrones' Natalie Dormer in J. Mendel. She is flanked by Modern Family's Sarah Hyland in Christian Siriano and Ariel Winter in Black Halo Eve. This is a slightly sexier and more sophisticated look for Winter, and I think she looks great. She's showing everyone she's growing up...but not too quickly! She's a Best Dressed nominee. 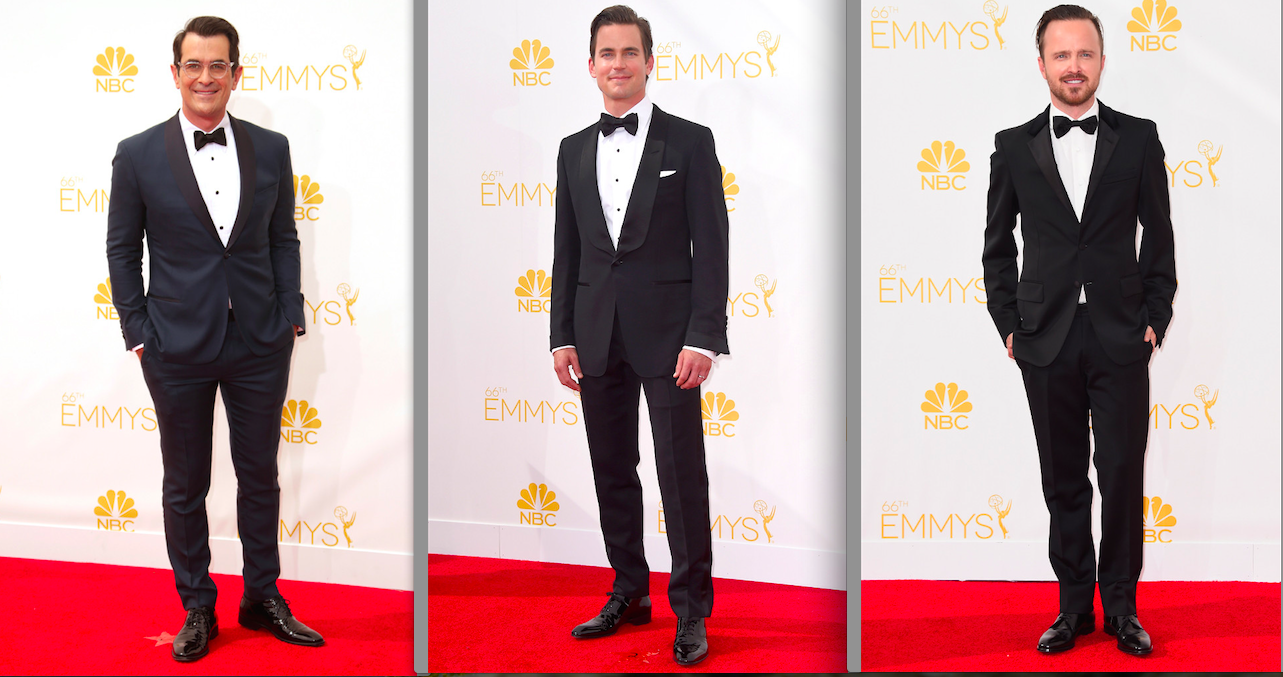 How about those men? Top left we have Ty Burrell, looking dapper. Top right is Aaron Paul (in Prada), also looking good. And in the middle is Matt Bomer, looking perfect in Tom Ford. (Alas, he would not go on to win the Emmy, but he does win my pick for Best Dressed Man.) Below are the handsome men of Game of Thrones. From left: Nikolaj Coster-Waldau in Salvatore Ferragamo; Peter Dinklage; and Kit Harrington, who slicked back is famous locks. 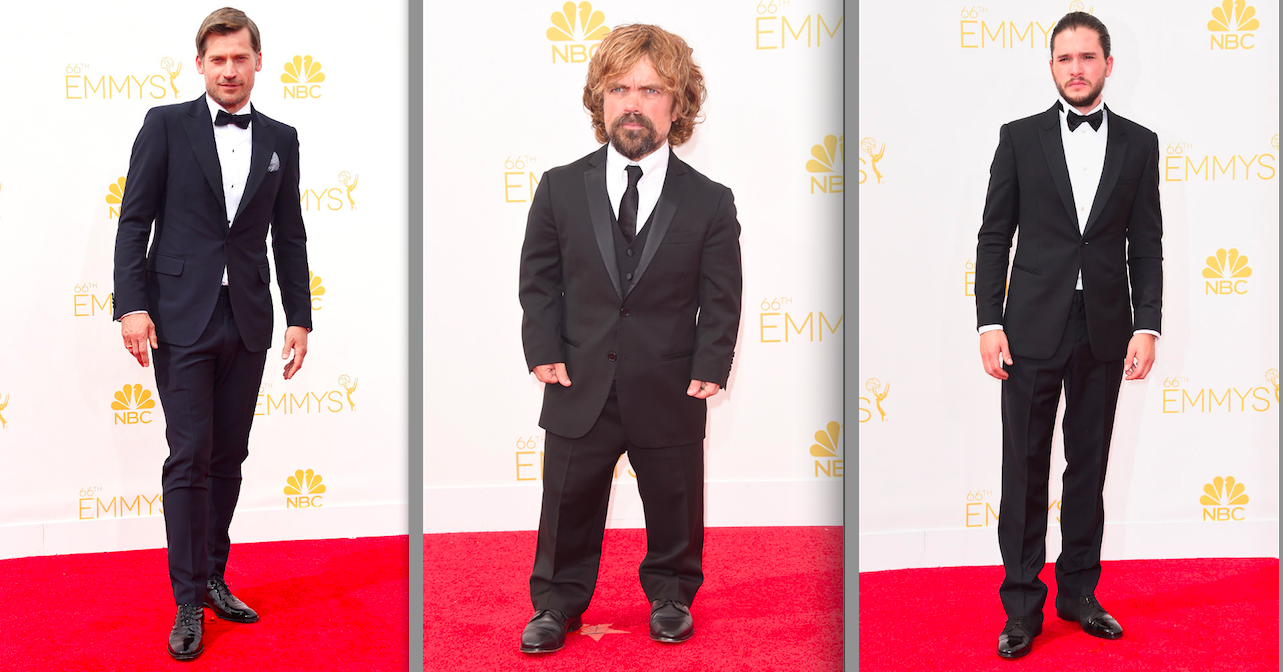 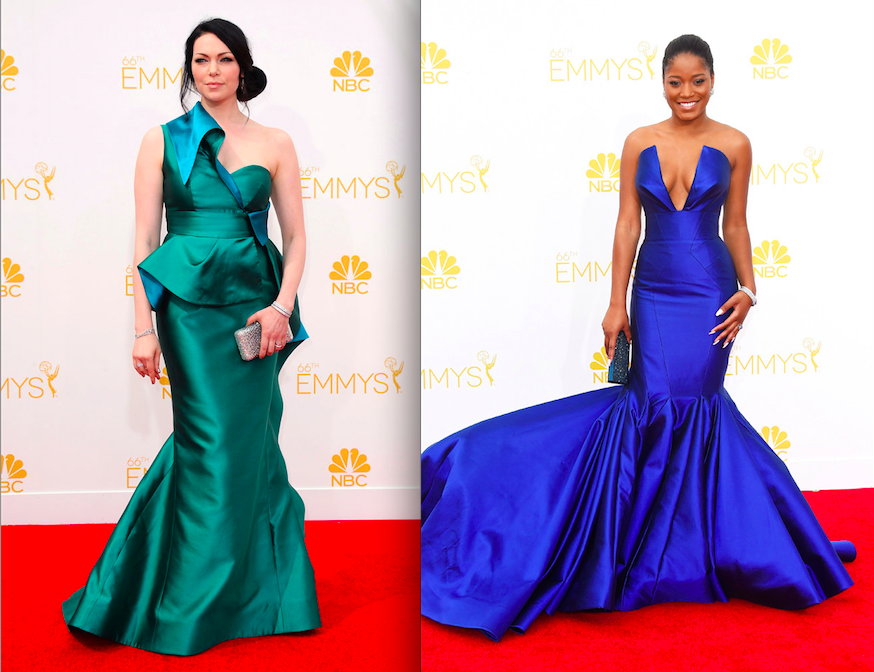 Blue, green and aquamarine, with varying degrees of success. Orange is the New Black star Laura Prepon goes for bold in Gustavo Cadile. What she gets, instead, is a mermaid look. Also borderline mermaid is Keke Palmer, who appears in this season of Masters of Sex (and who'll soon make her Broadway debut in Cinderella). The skin tight bodice going into the exaggerated bottom isn't my favorite look, but where this Rubin Singer dress really goes off track for me is the plunging neckline. It just looks unfinished, and I keep worrying that the top is going to flop down and we'll have a scandal. Below are two talented ladies in blue. Viola Davis and Edie Falco both look terrific in Escada dresses. Falco could have stepped up the accessories, but otherwise I like the look. 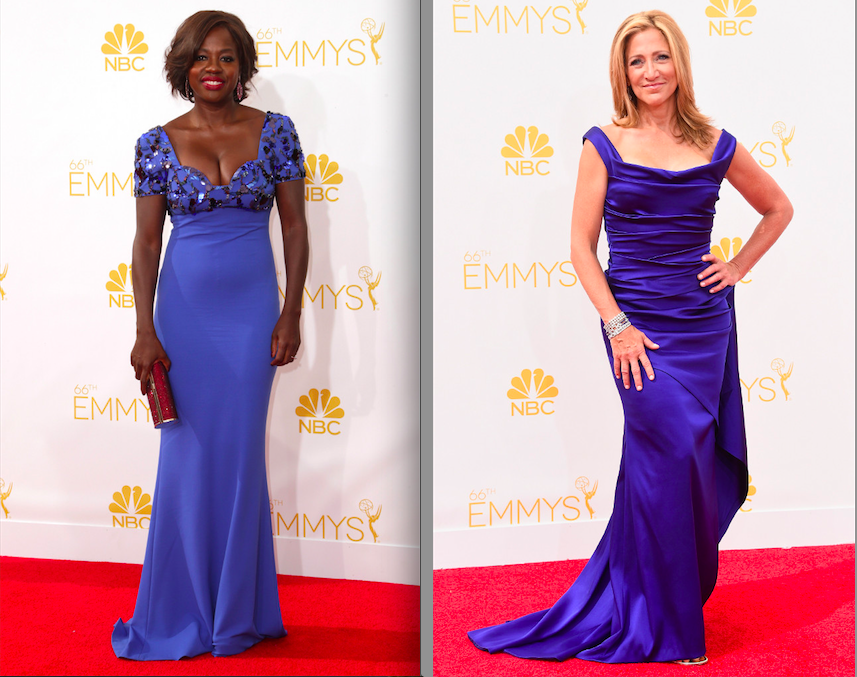 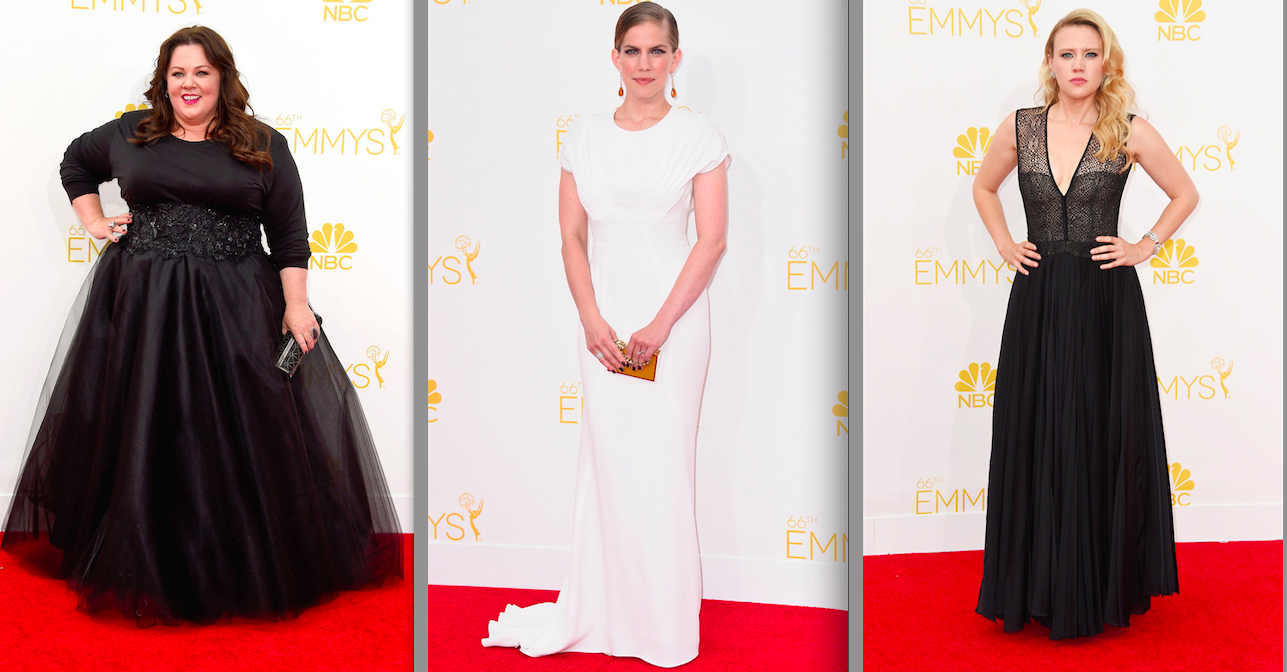 Black and white all over the red carpet. Top left Melissa McCarthy looks great in a black gown. The sparkly belt helps define her waist and the layers of tulle in her skirt are fun and celebratory. Veep's Anna Chlumsky looks sleek and chic in Zac Posen. Funny lady Kate McKinnon goes glam in her black and lace dress. Below we have first-time nominee Lizzy Caplan in Donna Karan Atelier. Caplan manages to mix the black and white in one dress and she stuns. Bottom center is Orange is the New Black's Laverne Cox in Marc Bouwer. She look glamorous and happy to be there. Then we have the timeless Christine Baranski. I think, technically, her dress is midnight blue or a dark slate gray, but she looks statuesque and fabulous. 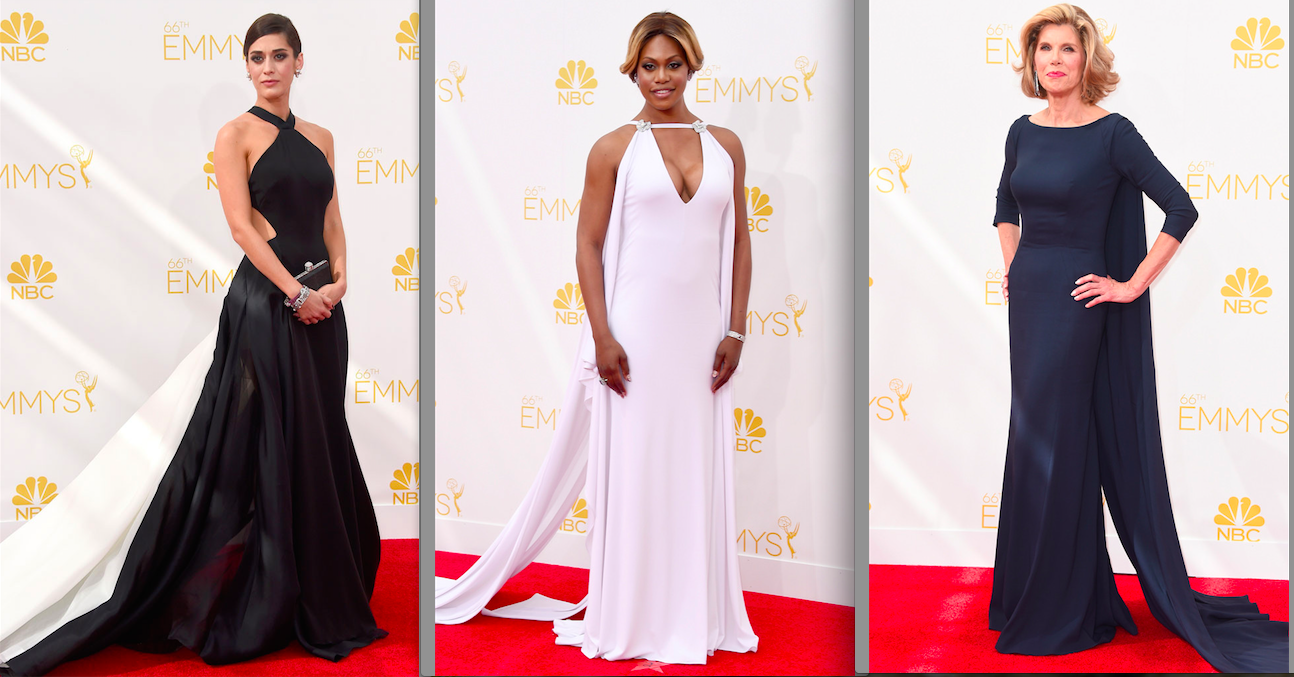 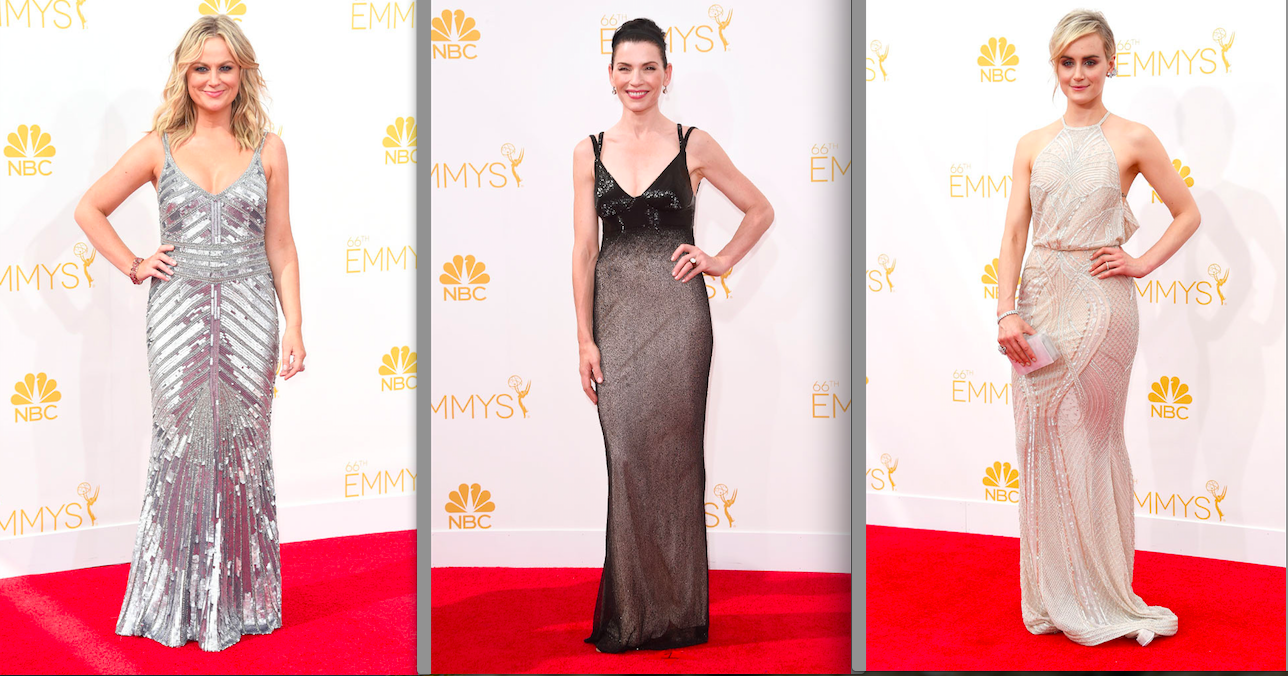 What's a red carpet without a little sparkle? Amy Poehler looks a little space age-y in her silver get up. Looking flawless is Julianna Margulies in Narciso Rodriguez. I like two-toned look and the strappy back ensured she'd wow from all directions. On the right is first-time nominee Taylor Schilling in Zuhair Murad. (Schilling was endearing on the red carpet when she struggled to say the designer's name properly. She's not jaded yet - how refreshing.) 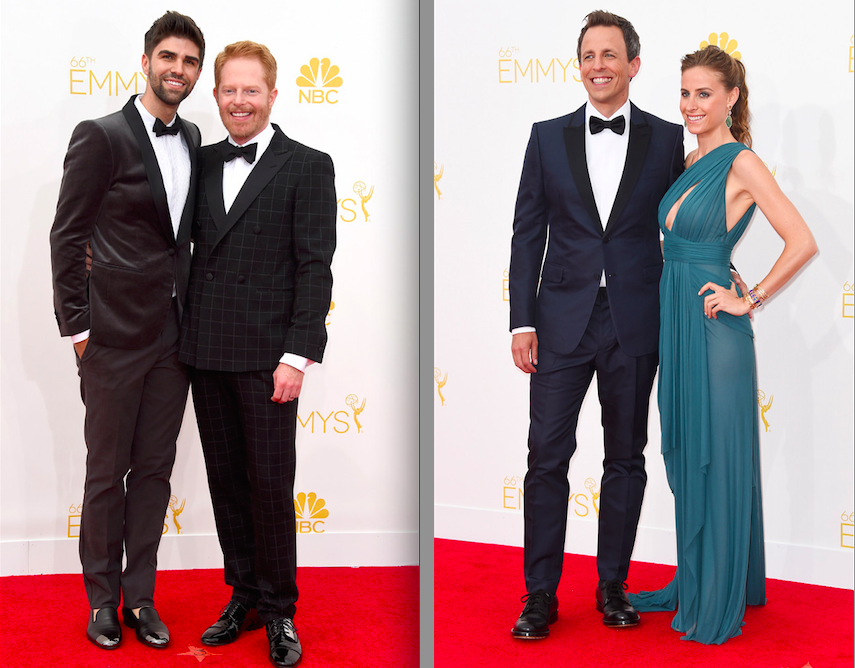 As always, we have several good looking couples. Top left are Justin Mikita and Jesse Tyler Ferguson, both in Etro. Top right is Emmy host Seth Meyers (in Valentino), and his beautiful wife, Alexi Ashe, part of the blue, green and aquamarine trend we saw above. Below are two couples who know the red carpet well: Jon Hamm (in Tom Ford) and Jennifer Westfeldt (in Marchesa), and Matthew McConaughey (going two-toned all the way, including his shoes), and his wife, Camila Alves. 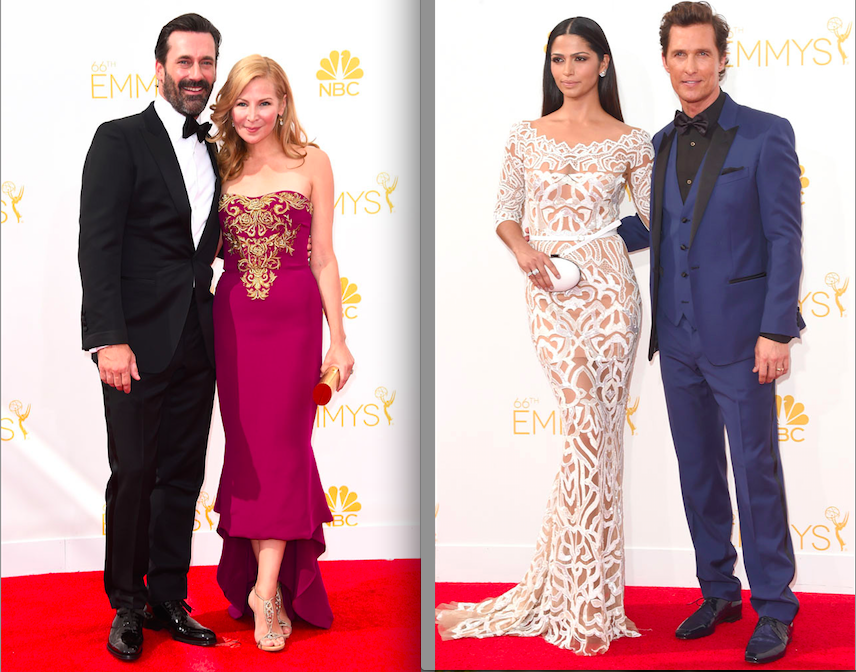 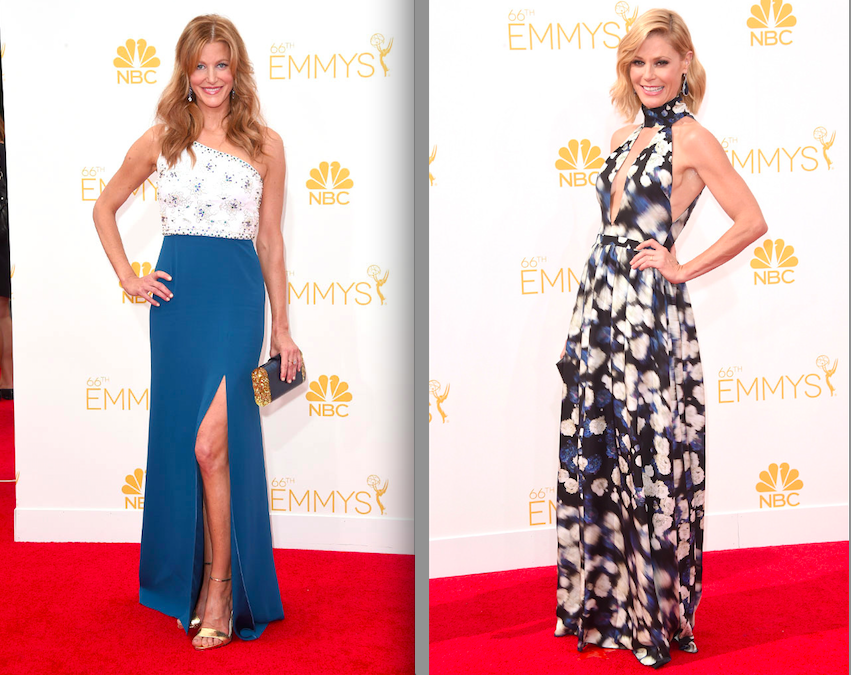 A now for something a little different. Ladies and gentleman, patterns plus. Top left and bottom right are the most subdued pattern looks. Anna Gunn goes for an embellished top and simple bottom in her Jenny Packham frock while Downton Abbey's Michelle Dockery brings a bit of whimsy with the color accents in her Rosie Assoulin gown. Top right, Julie Bowen goes full pattern in Peter Som. The front cut out keep this from looking like a retired lady's patio dress. And bottom left is the wonderful Sarah Paulson taking a fashion risk in Armani Prive. This is definitely a red carpet dress - it was meant to be seen in this venue. It's a little kooky, but it's also fun and fluffy, and Paulson's affable personality shines through. 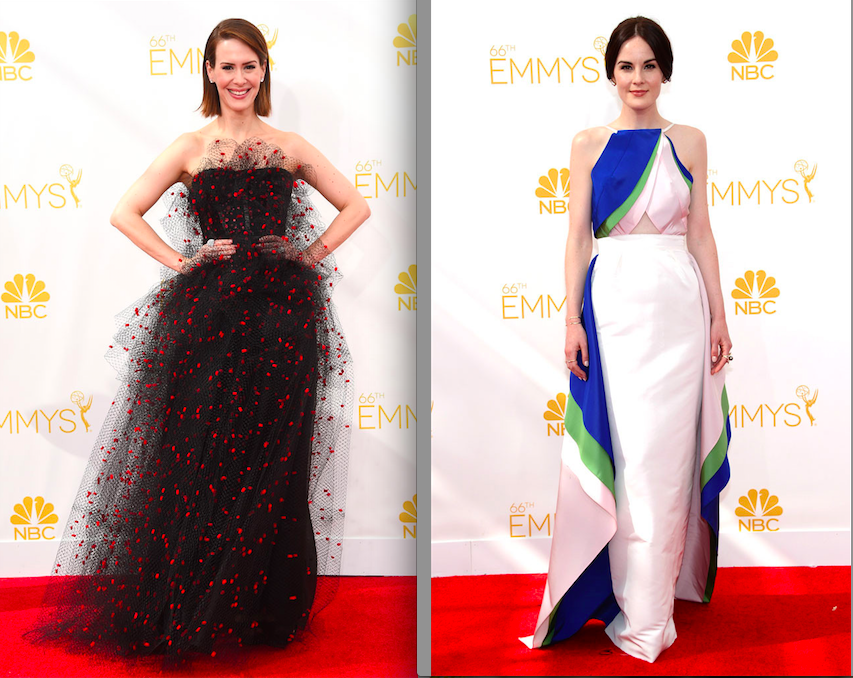 And now we come to the part of the red carpet we've all been waiting for. My pick for Worst Dressed should be no surprise to anyone who watched the red carpet. It's Lena Dunham in Giambattista Valli. Some might give her credit for taking a risk, but I don't. Lena and her (not so) amazing technicolor [nightmare] dress look ridiculous. While she might have a strong personality, this dress swallows her up and wears her. She appears overwhelmed by the size of the skirt and everything that's going on with her look - from the severe haircut and new color to the awkwardly tiered and overgrown petticoat that serves as the skirt. Not a good look.

For Best Dressed, I choose a woman who was already a winner, Uzo Aduba. In Christian Siriano, Aduba is on-trend with the knock-out red dress, which fits her perfectly, by the way. It's simple and classic, with a train that adds some oomph and ups the glamour quotient. This statement dress lets everyone know a star has arrived. And she looks so happy, flashing that contagious smile. Bravo, Uzo Aduba!

And now, the winner. Herein, a list of most of them. (Visit emmys.com for the full list.) Winners have an asterisks next to their name and are in bold.

Lead Actress
One of a few embarrassingly rich categories, as Margulies noted in her speech. (I also liked her shout out to the network schedule, with 22 episodes.) I had been rooting for Wright but this was a rejuvenating season for Margulies and The Good Wife, so congratulations!

Lead Actor
Woohoo! Many though the McConaughssance would continue and McConaughey would win an Oscar and Emmy in the same year. But hooray for Cranston, who gave an unparalleled performance in this final season of Breaking Bad, and also won a Tony this year.

Supporting Actress
Bravo to Anna Gunn, who won last year. (And you can see her on stage in New York in Sex with Strangers, and you should because it's a great play.)

Supporting Actor
What a tough category. Dinklage was so fantastic this season (well, he's so fantastic each season). Patinkin is Patinkin. Love him. Charles gave a tour de force in his final season. But it looks like the Academy wanted to honor Paul one last time. Bravo, bitch!

Writing
Oof. I don't even know how you choose in this category so bravo to Walley-Beckett.

Directing
Well, since I haven't finished True Detective yet, this is the one nominee I hadn't seen. But congratulations to Fukunaga, who wore French braid pigtails to an award show.

Comedy Series
I like Modern Family, but I was rooting for the zinger-filled Veep. Still, Steve Levitan gave a nice speech, closing it out by saying the show has been like "a big beautiful dream for the last five years, and we thank you for not waking us up."

Lead Actress
While I'm always pulling for Amy Poehler, I can't be mad at Julia Louis-Dreyfus taking home the statue. She's hilarious in Veep, her speech was delivered like the pro she is and who didn't love her lip lock with Bryan Cranston?

Supporting Actress
OK. I love Allison Janney. She was CJ Cregg and I will lover her forever. Her win last weekend from Masters of Sex was well-deserved. But Mom isn't good. How does this happen? Maybe it's because the show is so bad that everyone felt bad for Janney... Oh well. Congratulations for the six-time Emmy winner.

Supporting Actor
I actually wasn't expecting this. I was hoping Andre Braugher would win, but I do love some Phil Dunphy.

Writing
Congratulations to Louis C.K., who gave a short, sweet and heartfelt speech.

Directing
While a little long, Mancuso's speech was funny and, ultimately, sincere. Congratulations.


MINISERIES and MOVIES
Outstanding Miniseries
Note that this year, miniseries and movie are separated here, though not in the acting or other creative and technical categories.

Outstanding Television Movie
Bravo. I loved seeing Larry Kramer up there, with his Act Up hat. Never stop fighting for what you believe in.

Supporting Actress
Supporting Actor
No offense to Freeman, but here's what probably happened. Parsons, Mantello, Molina and Bomer (who should have won) split the The Normal Heart vote, leaving the opening for Freeman. That's my guess.
Writing
Sorry, but how does this not go to Larry Kramer?
Directing

And there we have it, the winners for the 66th Emmy Awards. It was a great television season, and I'm looking forward to all my stories coming back this fall. (And check out my Emmys Pinterest board for even more photos.)
Aaron Paul Allison Janney Anna Gunn Breaking Bad Bryan Cranston Emmys Jim Parsons Jimmy Fallon Julia Louis-Dreyfus Louis C.K. modern family Ty Burrell Uzo Aduba