The 68th Tony Awards are in the books! Hosted by Hugh Jackman, who will return to Broadway this fall in the Jez Butterworth play, The River, the broadcast was...um...decent. I don't know why Jackman needed to bounce/hop throughout his opening number, but it was fun enough.

We'll get to winners in a minute but first, a rant: Why, oh why, were there performances from shows that had absolutely nothing to do with this season? Each Tony Awards broadcast is supposed to celebrate the excellence that's been on Broadway in that season. Yes, I know Sting is a ratings draw, but let him be a draw next year when The Last Ship will have bowed on Broadway. Yes, I know Jennifer Hudson is a ratings draw, but she's not even in Finding Neverland, which does not even have an official slot on the 2014-2015 Broadway calendar. Yes, I know people like Wicked, but it's doing fine at the box office and doesn't need the extra exposure. (I am also perplexed as to why Cabaret, Rocky and Bullets Over Broadway performed, seeing as none were nominated for Best Musical or Best Revival, but at least they were part of this season.) I take such umbrage with these gratuitous performances (don't even get me started on the Music Man rap - I've always thought it was the first hip hop number on Broadway, but why the heck did that need to be part of the telecast?) because shows that actually were on Broadway this season - shows that ended up winning BEST SCORE - did not perform. I'm talking, of course, about The Bridges of Madison County. Is it just because the show is closed? Ugh. OK. End of rant.

Here is the full list of winners. Winners are in boldface type and are notated with an asterisk. (First the plays, then the musicals.) 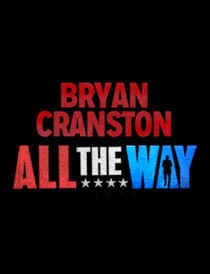 Best Play
Let me tell you why this is a bad choice. The Best Play is always stated with its playwright, and thus this award is, ostensibly for the play - the words - and not necessarily the production. My specialized knowledge of the subject matter in All the Way not withstanding, if you were to read this play, it wouldn't do anything. If you were to read Act One or Casa Valentina or Mothers and Sons, you'd be moved, enlightened, engrossed. All the Way only succeeds in performance, and that performance only succeeds with Bryan Cranston. He does great work, but without his star power this never would have made it to Broadway. This was the wrong choice.

Best Revival of a Play
This was a surprise to me. This being the one play revival I did not see, I can't justifiably comment on how deserving this production is of the accolade, but if you've been following me this season, you know I was rooting for Twelfth Night. 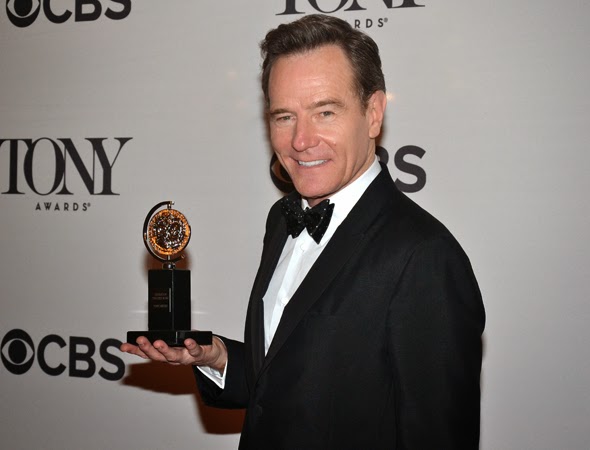 Best Performance by an Actor in a Leading Role in a Play
While I'm disappointed I'm not surprised. This category was announced after the Featured Actor in a Play, and when Mark Rylance won that award, I knew Cranston would win this. Cranston does give a good performance in this, so kudos to him. 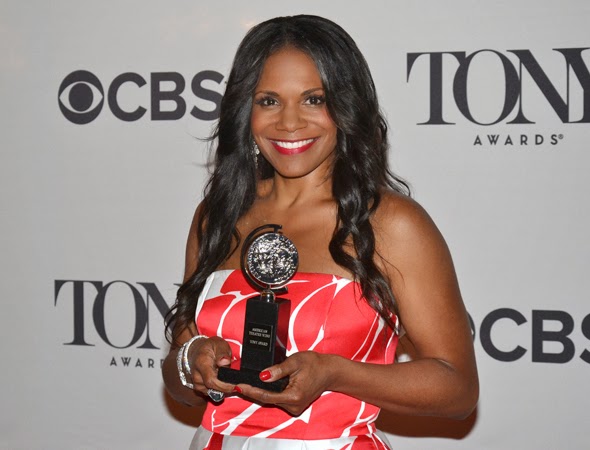 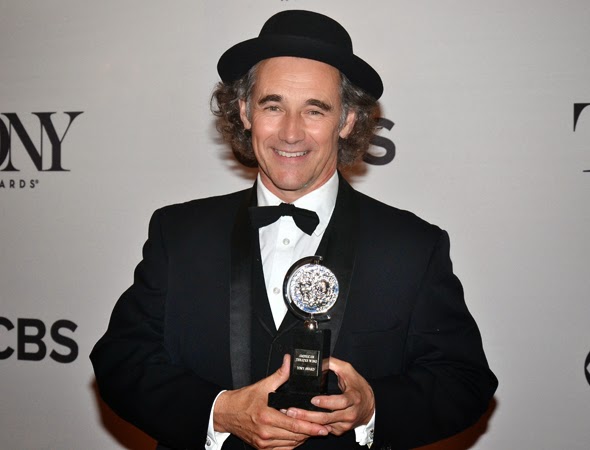 Best Performance by an Actor in a Featured Role in a Play
As I mentioned above, I was rooting for Rylance in the Lead Actor category, and I was doing so because I was hoping theatre stalwart Reed Birney would win this one. But Mark Rylance winning an award is always the right choice, and Rylance winning for Shakespeare is perfection. Plus, I really liked his speech. The now three-time Tony winner broke form and did not recite a poem (which he did on the two previous occasions); instead, Rylance paid homage to the American Sam Wanamaker who revived Shakespeare's Globe in London. Lovely. 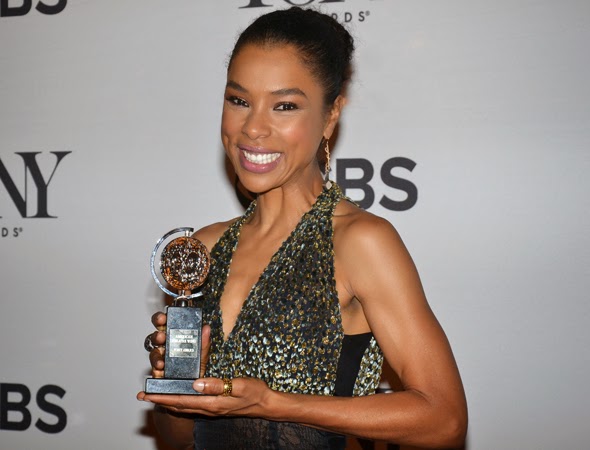 Best Performances by an Actress in a Featured Role in a Play
I haven't seen Okonedo's performance so I'll just say congratulations to the ebullient winner. 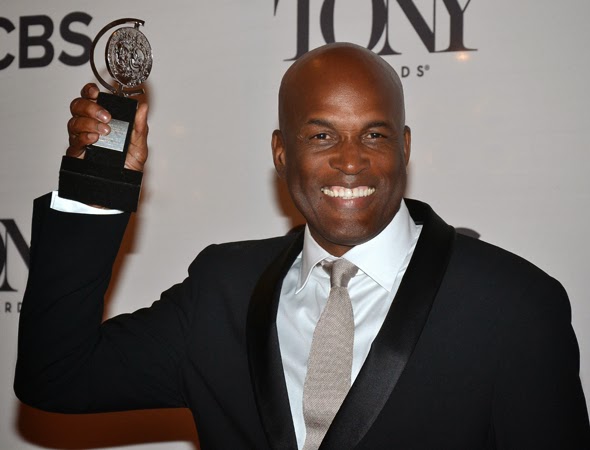 Best Direction of  a Play
This was another surprise, with most prognosticators predicting a win for either Carroll or Tiffany. I did like what Leon said in his speech, noting how important it is for "every child to have a little piece of theatre in their every day lives." Right on! 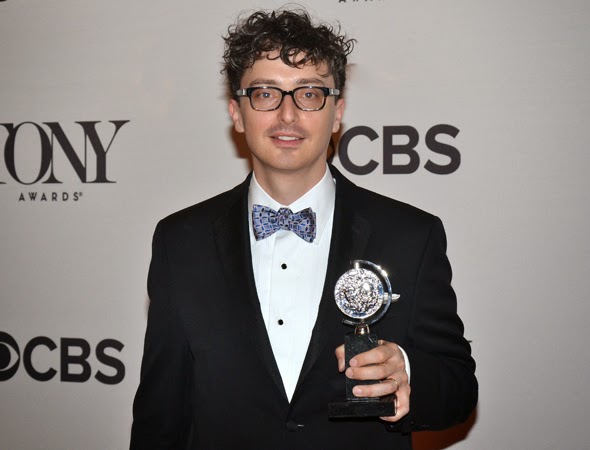 Best Scenic Design of a Play
Boritt's set is another character, and the play would not succeed the way it does with any other design. Bravo. 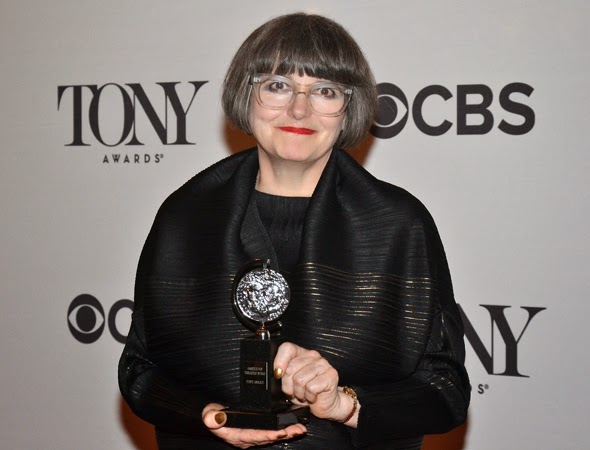 Best Costume Design of a Play
Huzzah! Head back to my review for a reminder of the craftsmanship and attention to detail that went into these period specific costumes. Way to go, Jenny!

Best Lighting Design of a Play
The lighting design in The Glass Menagerie was another character and added wonderful depth to the Tennessee Williams play. 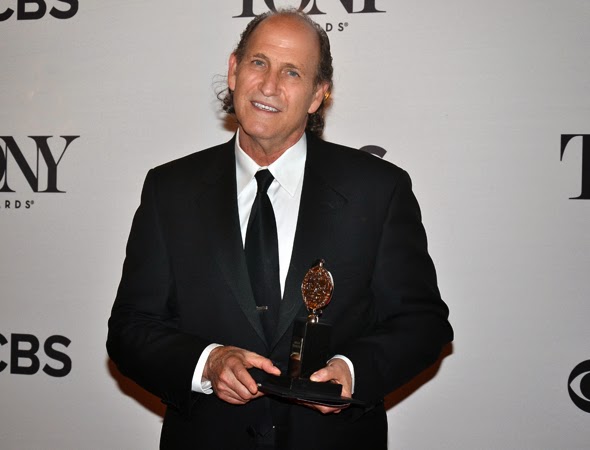 Best Sound Design of a Play
Haven't seen the show so no comment other than congratulations Steven Canyon Kennedy. 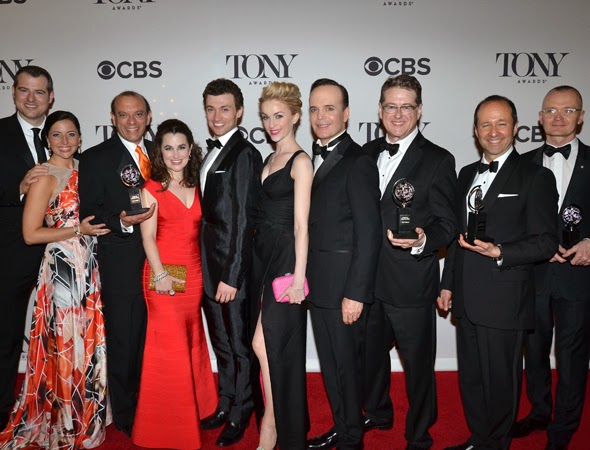 Best Musical
Ugh. Let's just move past the fact that the best musicals this season weren't even nominated in this category, despite there being a fifth slot available to Tony nominators. I guess I'm in the minority because most people who have seen this liked it. I thought it was boring. But that's what makes horse races. 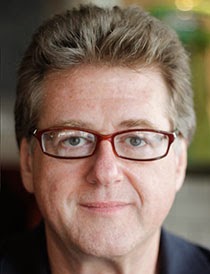 Best Book of a Musical
Again, Brian Yorkey wasn't even nominated for If/Then so... 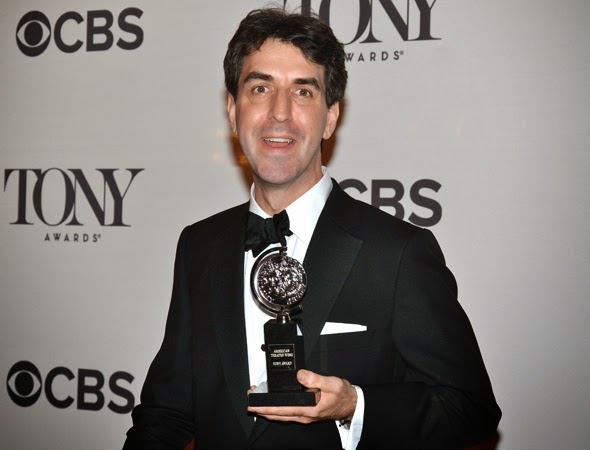 Best Original Score
And order has been restored. This is absolutely the best score this year, perhaps in several years. If you haven't heard it, do yourself a favor and head over to sh-k-boom to order your copy. It's gorgeous and lush and the voices and musicians bringing Brown's work to life are marvelous. Go forth and listen. 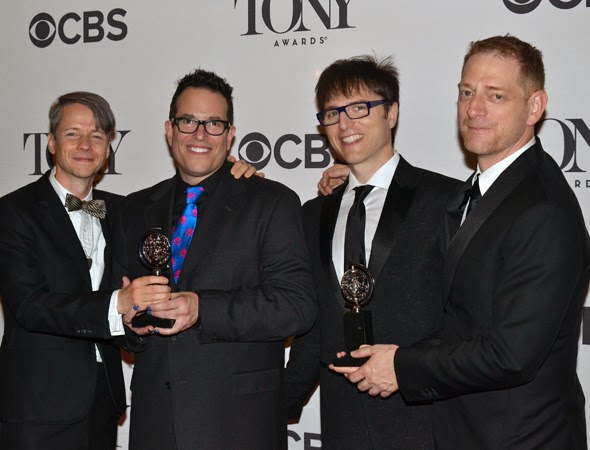 Best Revival of a Musical
This was one of the few sure-wins and, sure enough, it won. Hooray for a dirty, messy, aggressive, difficult punk rock musical taking home this honor. 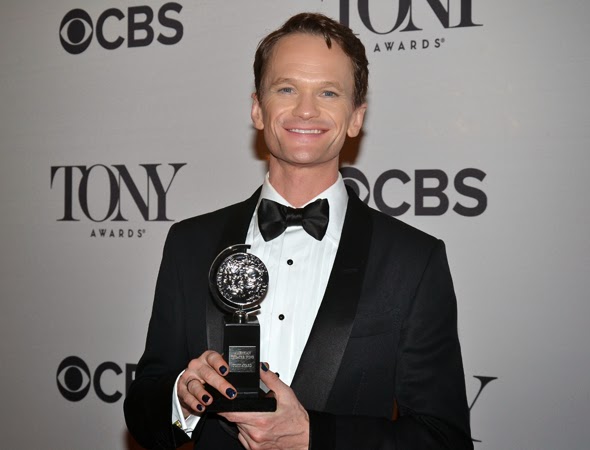 Best Performance by an Actor in a Leading Role in a Musical
This was the other sure win. NPH is doing incredible, brave, raw things at the Belasco, and I truly believe people are going to be talking about his performance for years to come. 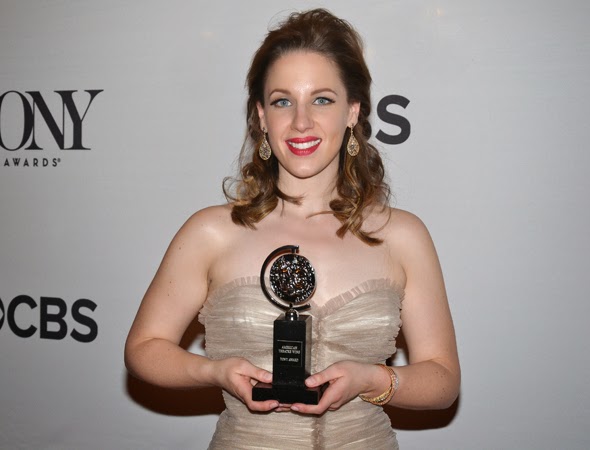 Best Performance by an Actress in a Leading Role in a Musical
I LOVE JESSIE MUELLER. Seriously, this lady can do no wrong. Foster, Menzel and O'Hara are sensational, but Mueller... She's a star and she deserved this. 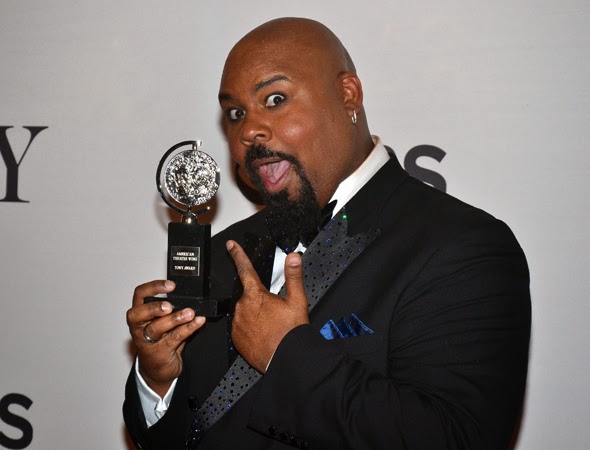 Best Performance by an Actor in a Featured Role in a Musical
This third and final sure thing was Iglehart bringing home the Tony for the role he's been waiting to play since he was a teen. The big kid gives a terrific performance, as everyone got to see when he performed earlier in the night. Congrats, Genie!

Best Performance by an Actress in a Featured Role in a Musical
Rock on, Lena Hall! She's playing opposite one of the flashiest performances of the season so the fact that she's able to draw your attention at all is remarkable. She gives a touching performance, and this is well deserved. 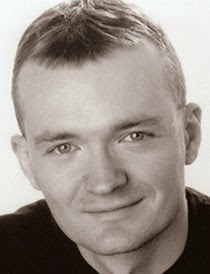 Best Direction of a Musical
I still cannot understand why Alex Timbers wasn't nominated in this category, but given the nominees, I can't understand how Tresnjak won over the visionary Mayer. Whatever. Hedwig is the "internationally ignored" star and she's a badass. Ditto Michael Mayer. 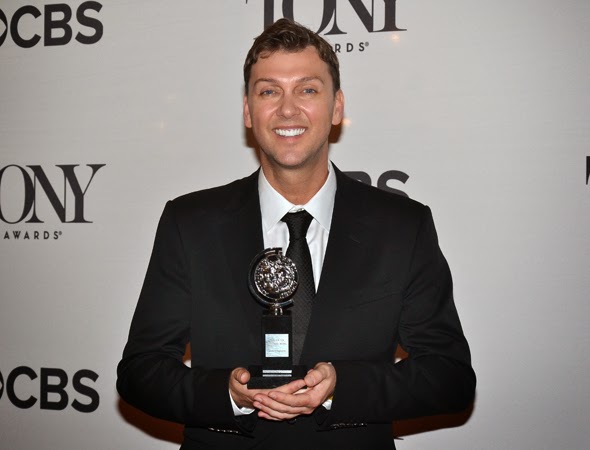 Best Choreography
I'm excited to get to see After Midnight next month. Based on the show's performance that opened the Tony broadcast, I think the choreography is going to be particularly impressive. 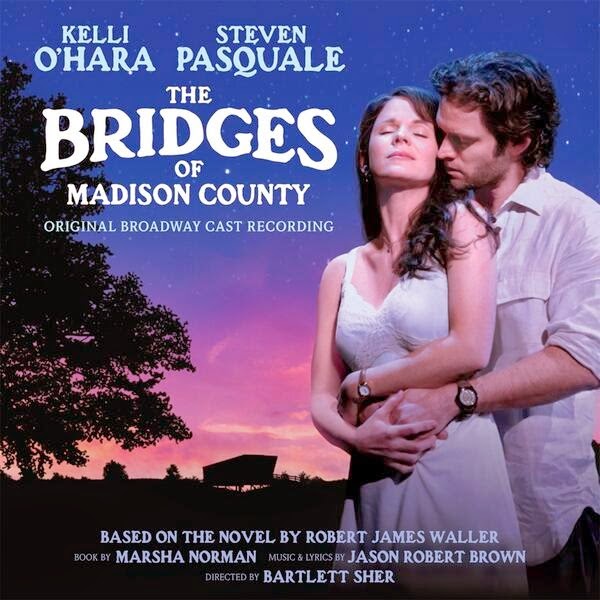 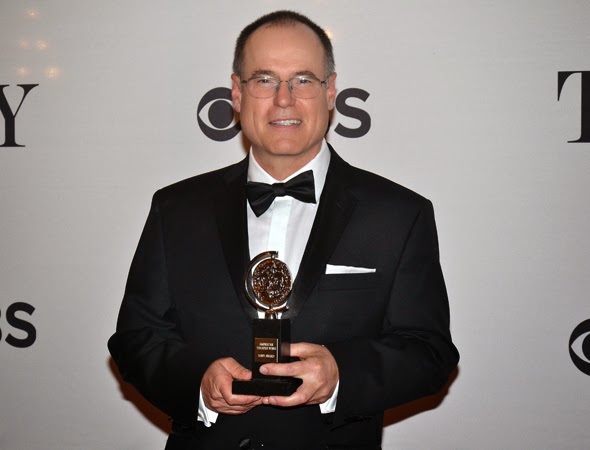 Best Scenic Design of a Musical
Good choice. Barreca's impressive set, the way it moves and what director Alex Timbers does with it is the only reason to see this show. 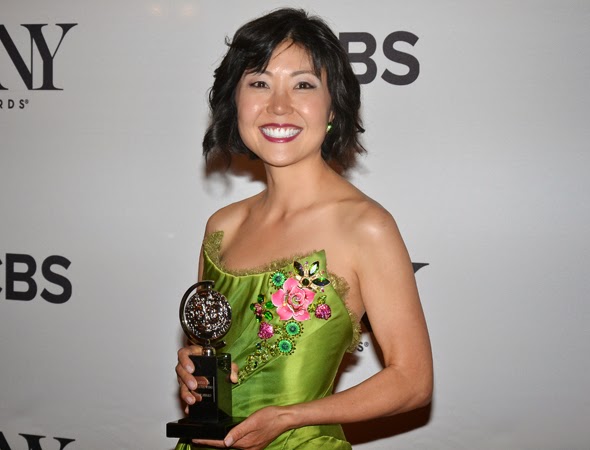 Best Costume Design of a Musical
Eh. Can't really complain but can't really get excited. How about a round of applause for the dressers on this show?

Best Lighting Design of a Musical
Yep - right choice. Kevin Adams is a masterful lighting designer, and he proved it once again with Hedwig. 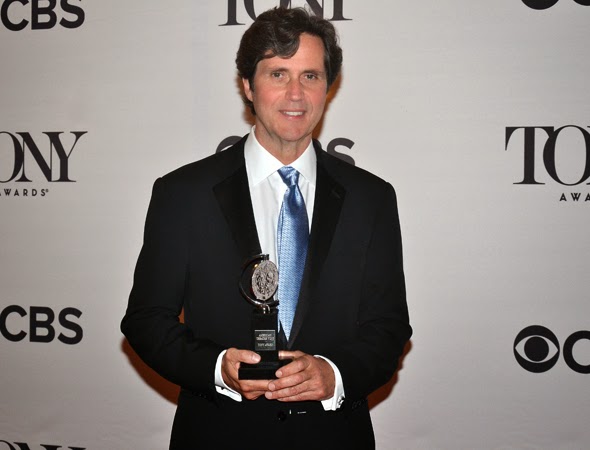 Special Tony Honors (non-competitive awards)
And there you have it: The winners of the 68th Tony Awards. Keep checking my Tony Pinterest board and my Culturalist profile, both of which I'll be updating throughout the day with fun photos and lists.

All photos of winners with their Tony Awards by David Gordon for Theater Mania except: A Raisin in the Sun, by Heather Wines for CBS; and Natasha Katz, Kevin Adams and Lena Hall, Walter McBride for Broadwayworld.com.