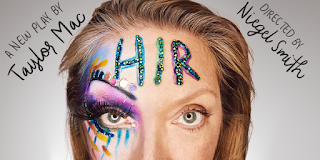 Taylor Mac's Hir (pronounced "here"), finds Isaac (Cameron Scoggins (Pocatello)) returning home from war to a family and home he doesn't recognize. His first clue that things aren't the way he left them is that he can't get in the front door; it's blocked. When he enters through the back door, he sees the place in disarray. Clothes, clean and dirty, are strewn about; furniture is wherever it was last used; cupboards are empty, with food and dishes anywhere but where they are "supposed" to be. His father, Arnold (Daniel Oreskes) has been dressed up in a dress, make up and a clown wig. Paige (Tony nominee Kristine Nielsen (Vanya..., You Can't...), Isaac's mother, appears carefree and possessed by a manic energy, and, oh, Isaac's sister is now his brother, Max (Tom Phelan).

It's a little disorienting, especially for a veteran who had been with Mortuary Affairs, meaning his job was to literally pick up the pieces of dead bodies. Paige begins to explain the family's new lifestyle. Unconcerned with the fact that Arnold had a stroke (she often leaves him to fend for himself), she is more concerned with supporting her child, Max, and hir development.

A detour for a lesson: In the transgender community (or at least in the vernacular of this play), pronouns shake out as follows. She/he becomes "ze" (pronounced like "hey," but with a Z at the start), and her/him becomes "hir," making the pronouns gender-neutral, and moving beyond most people's binary idea of gender.

Paige is palpably emboldened by Max's strength and hir ability to live hir truth, as is hip to say these days. Just a Max is living an open, honest life, Paige feels liberated, having found the strength to break free from stereotypical gender roles. She is now unburdened by responsibilities, like washing dishes or taking care of her invalid husband. (Paige reasons that because Arnold was so horrible to her and the kids when he was sentient—he beat them, he belittled and raped her, he aggressively enforced his ideas of a normal family on her—she does not have to care for him.) We also see that she learned this from Max's "education."

Max has been reading up on gender and its manifestations and changes and evolution in nature, and ze's filled with all sort of ideas and ideals. Max believes hirself an expert on this subject and more, and aggressively enforces hir ideas of what a person should be (or how a person should react to changing gender notions). But throughout the first act, in which Paige and Max harangued/explained everything to Isaac, I thought that for people so sensitive to how people treat them, they were being entirely insensitive to Isaac.

I also thought: Why is it OK to use your personal journey as an excuse for being an asshole? Why is it OK to say, "I'm different, therefore you can't criticize me at all. I'm entitled to treat you poorly and insist on doing everything on my terms," as if other people somehow don't matter? As if you're no longer part of this family. How is it OK to treat your husband, an invalid, no matter how awful he was, like that? You're not suddenly omniscient and correct about everything. It's really disgusting behavior masquerading as enlightenment.

In truth, all four characters are struggling to gain control of their lives. In the second act, we see this play out. We see Isaac reverting to his Mortuary Affairs role, picking up the pieces of his broken home. We see Paige desperate to retain personal agency in her life. We see Max become unsure of everything ze was so certain of, just hours ago. (The action of the play, directed by Niegel Smith, plays out over the course of one day.)

It's fascinating and sad. (Of course, there were funny bits, and many of my fellow audience members were hollowing throughout, but I found the undercurrents devastatingly sad.) What was most interesting, though, was Mac's reason for writing the play, which actually helped to alleviate some of my anger toward Paige and Max. In a post-show discussion, Mac said judy (Mac's gender pronoun, as expressed in the program) wrote the play to explore something judy's community was ignoring. Essentially, Mac wrote the play to explore and, in part, respond to all the things that were infuriating me. I applaud Mac for tackling something that is somewhat taboo within the transgender and the larger LGBT community.
Kristine Neilsen LGBT off-Broadway play playwrights horizons Taylor Mac Tom Phelan