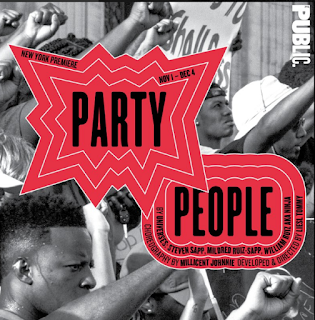 A quick note to praise Party People, the revolutionary play with music at the Public.

Created by Universes (Steven Sapp, Mildred Ruiz-Sapp, and William Ruiz), this show asks: How do we fight now? There's just as much to speak out against and fight for as there was in the 60s, it can be difficult to know what to do. I happened to see this the Saturday after the election, with the wounds of Trump's Electoral College victory still fresh. It was exactly what I needed.

Taking a look at the history of the 60s Civil Rights movement, particularly the role of the Black Panthers and Young Lords, Party People juxtaposes history with the here and now. It shows that while the revolution looks different, the fight is the same. The fight for justice for ALL continues. How we fight is different, too. There's a moment in the show when today's young people are called armchair activists, with the veteran revolutionaries chiding them for thinking tweeting is activism.

There's more than one way to fight, though. Activism requires action, and there are many actions one can take. Yes, among them should be spreading the word through social media. There is so much misinformation out there—the only way to fight is to stay informed. It's 2016; the revolution WILL be televised.