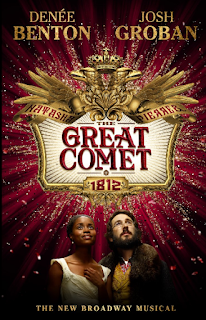 The show starts when you walk in to the Imperial Theatre, with the entryway looking like a dive club. The walls are lined with posters for Russian bands. In the house, lively Russian music plays as the audience gets seated in the opulent Russian nightclub, outfitted with orbital and constellation–looking light fixtures. The design appears to continue in the mezzanine, with blood red curtains and portraits of notable Russians adorning the walls. Looking around, you can see that the playing area is everywhere, making this a fantastically immersive experience. I had a blast. (Be sure to check out all the seating options, including stage seating, to get the most out of the experience.) 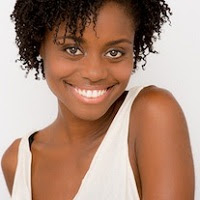 Natasha, Pierre, and the Great Comet of 1812 is inspired by a brief passage in the classic Leo Tolstoy doorstop novel, War and Peace. This portion is a soap opera, but one you care about when you're reading the full novel. In The Great Comet, the action centers on Natasha and Pierre (obviously). Natasha (Denee Benton) is young and thinks she's in love with her fiance, Andrey (Nicholas Belton). Andrey's away fighting in the war, though, leaving Natasha to be easily wooed by the cad (and already married) Anatole (a perfectly cast Lucas Steele), much to the chagrin of her cousin, Sonya (Brittain Ashford). Meanwhile, Pierre (Josh Groban), who is a family friend of Natasha's (and carries a torch for her), is searching. He's in an unhappy marriage (with Helene (Amber Gray), Anatole's sister), and spends a lot of time drinking and brooding while trying to figure out the meaning of life. He also gets into a duel with Dolokhov (Nick Choksi), Anatole's friend and Helene's flirting partner. Pierre's a bit of a mess.

It's easy enough to follow (especially if you've read the novel), but there's a helpful family tree and synopsis in the Playbill, and shortly before the show begins, ensemble members, who'll play with you throughout the show, greet the audience, and encourage them to read said synopsis. To boot, the show begins with a prologue in which we're given the lowdown on each of the featured players: Balaga is fun. Bolkonsky is crazy. Mary is plain. Dolokhov is fierce. Helene's a slut. Anatole is hot. Marya is old school. Sonya is good. Natasha is young. And Andrey isn't here.

I love this opening. It helps set the tone of the show, written by Dave Malloy and directed by Rachel Chavkin, giving the audience a taste of the punk rock ethos that drives this theatrical, lively, expertly crafted electro-pop musical. (What, did you think it would be a pastiche 19th century Russian score?)

Despite being on Broadway, there's a scrappy sensibility to the storytelling. Indeed, The Great Comet has off-Broadway roots, having been commissioned by and first performed at Ars Nova, a New York City breeding ground for experimental, off-beat creatives. I didn't get to see it off-Broadway, but I get the sense that this is the show that Malloy and Chavkin (who've also collaborated on Preludes) set out to make, that it hasn't been sanitized for Broadway.

And thank Thespis for that. Because it's different, because it takes risks, because it's audacious, it actually excites. This is a show that includes an all-out anachronistic (and somewhat anarchistic) rave, and basically stops the second act to have a raucous, zany chase in which Balaga (Paul Pinto) drives the troika that will help Anatole and Dolokhov stealthily whisk Natasha away so she and Anatole can elope. Seriously, it's about ten minutes of semi-controlled chaos, a thrilling sequence during which the audience is given shakers, and it seems like the wheels are continually threatening to come off the wagon. It could be awful. It could be juvenile. Instead, it's exciting and dangerous, and almost feels like a mad-cap Muppet sequence.

There's so much to take in, from Mimi Lien's scenic design (including the banquet and stage seating), Paloma Young's gorgeous costumes, and Bradley King's moody lighting to Sam Pinkleton's frenetic choreography and Or Matias's musical direction (he's in a pit that is visible throughout the show, and also serves as home base for Pierre, and he's as much a character in the show as the named characters), that's it's difficult to pinpoint specific elements after just one viewing, but it won't stop me from trying.

Most of the cast, though not Benton or Groban, have been with the show since its formative days at Ars Nova, and most of them are fantastic. I was unimpressed with Ashford and Gelsey Bell (who plays the mousy, plain Mary, Andrey's sister), but thought Choksi (Brooklynite) was fantastic as Dolohkov.

The main attraction for many is Josh Groban, the theatre-loving recording artist and actor who is making his long-awaited Broadway debut. He has an amazing voice, and he's doing amazing things with it in this show. Here, his voice is rougher than on his albums, which works well, speaking to Pierre's character. In the middle of act one, though, Pierre sings the seven-minute aria, "Dust and Ashes." This is a powerful song, Malloy wrote terrific orchestrations, and it shows off Groban's vocal virtuosity, but the song itself feels unearned solely within the context of the show. If you've read the novel, you know the internal struggles Pierre has been going through, and this sort of revelatory, turning point song makes sense. But in the show, you don't get that history, and so the power and depth are blunted. Because Groban's singing it (and because it's a good song) I don't mind, and there's no way you could have Groban and his voice in a musical and not give him a moment like this, but the show-stopping number is misplaced.

Groban also gets to show off his skills as a consummate musician, as Pierre spends most of his time in the orchestra pit. It's a gas watching him be part of the band; Groban tickles the ivories, gets on the squeeze box, plays tambourine, and more, developing a camaraderie with the other musicians while keeping the aloof Pierre separated from a lot of the action (and audience).

I knew Groban would thrill me, but I was not ready for the luminous Denee Benton, who is also making her Broadway debut. She is fabulous, and has a beautiful voice. I can't wait to get a recording of her singing just about everything. I was impressed with the way Benton was able to capture Natasha's young, fickle personality. In Benton's care, Natasha is naive but not a flake, and, like Pierre, searching for something true. I think we've found it in this adventurous new musical.
Ars Nova Broadway Dave Malloy Denee Benton Great Comet of 1812 Josh Groban Lucas Steele musical Nick Choksi Rachel Chavkin