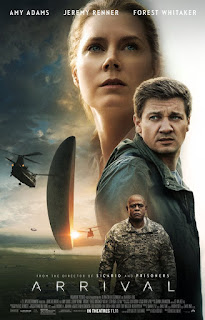 I really liked this movie. On the surface, this might strike you as an alien movie, but Ripley doesn't have a gun. Instead, our heroine is armed with a brain and the ability to learn and communicate.

The always impressive Amy Adams (The Fighter, Nocturnal Animals) plays cunning linguist Louise, who, when alien objects touch down in 12 places across the globe, is enlisted by the military to try to figure out what their purpose on earth is. (By the way, Adams is fearless in this unglamorous role.)  Louise joins a team of military men, led by Colonel Weber (Forest Whitaker) and Agent Halpern (Michael Stuhlbarg), and scientists, including theoretical physicist, Ian (Jeremy Renner), who are all trying to save human kind.

Written by Eric Heisserer (based on the Ted Chiang story, "Story of Your Life") and directed by Denis Villeneuve (Enemy), the story is interspersed with flashes of Louise's home life, which includes daughter Hannah. As the movie continues, though, you're not sure if they're flashbacks or visions of what's to come. And that's part of the fun.

Arrival's prologue introduces us to Louise and Hannah, showing the different stages a mother and daughter might go through. There's the time when Hannah is a snuggling toddler, and says to her mommy, "I love you"; and there's the time when Hannah is a teenager, and says to her mother, "I hate you." Our entire lives are spent trying to figure out how to communicate with one another, trying to connect with those who see the world the way we do, those who use the same language.

You see, the importance of language cannot be overstated. It not only helps us converse, but shared language can help us understand one another. As Louise points out, the language we speak shapes the way we think. If someone or some thing thinks differently, you could use the same words and communicate entirely different things. The way this lesson and Louise's fight to decipher the aliens' language plays out is—seriously—romantic and affecting. By learning how to speak, we learn how to connect, and, in turn, we learn about ourselves.
Amy Adams Arrival Denis Villeneuve film Forest Whitaker Jeremy Renner Michael Stuhlbarg movie