December 02, 2016
There was no Week in Review on November 25. This week's post contains news from last week and this week. 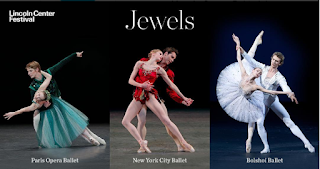 Lincoln Center Festival
Exciting news about the 2017 Lincoln Center Festival: For the first time ever, three ballet companies will perform the George Balanchine classic, Jewels, at the same performance. Members of the New York City Ballet, the Paris Opera Ballet, and the Bolshoi ballet will share the wings, with NYCB members dancing "Rubies"; POB members dancing "Emeralds"; and Bolshoi members dancing "Diamonds." The five-performance run begins July 20, 2017, and concludes July 23. Premium ticket packages are on sale now, and individual tickets go on sale March 29. You can expect to hear the full Lincoln Center Festival lineup shortly before individual tickets go on sale. Visit lincolncenterfestival.org for more, and watch the announcement, which was live-streamed on Facebook and includes interviews with the companies' directors, Peter Martins, Aurelie Dupont, and Makhar Vaziev, respectively, below.

Coming Up
The latest David Byrne–Alex Timbers collaboration, Joan of Arc: Into the Fire, is coming to the Public this winter, running February 14, 2017, through March 26. Previously titled Saint Joan, the rock musical is written by Byrne and directed by Timbers, and the Public production will mark its world premiere. The duo famously collaborated on Here Lies Love, another musical about a notable woman. Tickets for Joan of Arc: Into the Fire will go on sale to Public members this month, and will be available to the public beginning January 10. Playbill has more.

The creative team for the Broadway bow of War Paint, about the women at the head of dueling cosmetic companies, has been confirmed. Scenic designer David Korins (Hamilton, Dear Evan Hansen); costume designer Catherine Zuber (The King and I); lighting designer Kenneth Posner (On Your Feet); and sound designer Brian Ronan (American Idiot) will all reprise their work. (War Paint played Chicago this summer; its Broadway home is the Nederlander.) War Paint stars Patti LuPone and Christine Ebersole; previews begin March 7, 2017, and officially opens April 6. Tickets are now on sale. Playbill has more.

It's an Honor/End of Year Lists
Grammy Hall of Fame—25 recordings will join the Grammy Hall of Fame. Making up the class of 2017 are, among others, Nirvana's "Smells Like Teen Spirit"; REM's "Losing My Religion"; David Bowie's "Changes"; Billie Holiday, Lady Sings the Blues; Lesley Gore's "You Don't Own Me"; N.W.A.'s Straight Outta Compton; and Prince's Sign O' the Times. Visit Rolling Stone for the full list.

Gotham Independent Film Awards—Winners of the 26th Annual Gotham Awards were announced and honored this week in NYC. Moonlight was a big winner, taking home the top honor, Best Feature, as well as awards for its writers, Tarell Alvin McCraney (Head of Passes) and Barry Jenkins; the Special Jury Award for Ensemble Performance; and the Gotham Independent Film Audience Award. Indie Wire has the full list of winners.

National Board of Review Best of 2016—Members of the NBR have named their picks for the best of 2016. Amy Adams was named Best Actress (Arrival), while Manchester by the Sea was named Best Film and Best Original Screenplay (Kenneth Lonergan, Hold On To Me Darling), among other superlatives. Moonlight and La La Land we also named to its Top 10 Films list. The Film Stage has the full list of honorees.

Time's Top 10—Time has released its Top 10 of 2016 lists. Among the magazine's theatre picks are Anna Deavere Smith's Notes from the Field; Dominique Morisseau's Skeleton Crew; this spring's revival of She Loves Me; Natasha, Pierre, and The Great Comet of 1812; Dear Evan Hansen; Mike Bartlett's Love, Love, Love; and the short–lived Shuffle Along, or The Story of the Musical Sensation of 1921 and All That Followed. Visit the magazine's Top 10 of Everything landing page for more.