For centuries, people have been imploring one another to remember this or that historic event, tragic or otherwise. They don't, however, always say exactly what you should remember or why. So what happens when we learn the wrong lessons about our history?

In If I Forget, Steven Levenson (Dear Evan Hansen) explores this question through the lens of what it means to be a modern American Jew. (Though the play is set in mid-2000 and early 2001, the conversations and debates feel fresh, and like they could be taking place in 2017.) Michael Fischer (Jeremy Shamos, terrific and restrained as Michael tries not to be the agitator) and his wife, Ellen (Tasha Lawrence), have traveled from their Brooklyn home to Tenleytown, a Washington, DC, suburb. Michael's father, Lou (Larry Bryggman) still lives there, in the Fischer family home, though he's not doing too well. Michael's sisters, Holly (Kate Walsh) and Sharon (a compelling Maria Dizzia) live in town, and share (unevenly) caretaking duties.

The big conversations and family debates (directed by Daniel Sullivan) ultimately boil down to what history means to each person. (Holly's husband, Howard (Gary Wilmes), and son, Joey (Seth Steinberg) are also around from some of the conversations.) As Michael is a Jewish Studies professor, there are debates about modern Jewish history, including and especially the Holocaust, and because patriarch Lou is ailing, there are debates about how to care for him, and where to get the money to do it. The siblings argue over what to do with the family store, which, for a long time, has been the family store only in so much as the family still owns the space; they've been renting it out for years. 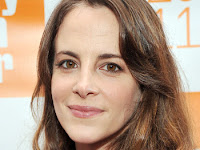 It's easy to see the parallels between each person's view of history and modern Jewry and their feelings about the store. Sharon, the most actively Jewish of the Fischer siblings, is absolutist in her stance on Israel, informed, of course, by the Holocaust; she also can't bear the thought of selling the store, regardless of the financial windfall. On the other end of the spectrum, Michael, the academic, understands the Holocaust's place in history, but does not treat Israel differently because of it; his politics are more liberal, supporting or criticizing Israel as he would any other country. (Holly is somewhere in the middle; she's one of those non-practicing yet self-righteous Jews.) It's no surprise, then, when Michael is easily convinced that selling the store is the right thing to do. In a moving conversation with his father, the different points of view are crystallized: Michael says, "I don't believe in ghosts." His father later says, "For you, history is an abstraction."

Who's right? How should we approach history? Levenson forces audiences to confront what are, for many, long- and strongly-held beliefs, stances that have cemented as a matter of fact without critical thinking or questioning. Chiefly (as this was his impetus for writing the play), he asks what it means to be a modern American Jew.

Must there be group think? Must everything be steeped in death and guilt, must everything be penance for surviving the Holocaust? We've said never again, yet there have been other holocausts and gruesome genocides since. So did we really learn anything? If not, what’s the virtue in remembering? Perhaps, as one of the Fischers says, "we've learned the wrong lessons."

Indeed, it seems like, even now, we can't have a conversation about being Jewish without talking about the Holocaust, and we can't have a conversation about politics and Israel without talking about religion (and the Holocaust). So if we forget, would it be such a terrible thing? This is the thesis of Michael's controversial book, and Levenson raises the question to help us look at our history. Ultimately, the question driving If I Forget is one Joey, the teenager, poignantly asks: "What's my inheritance?" He's asking a literal question, but, of course, we can infer the broader question, what is my history, and where do I fit in?

Interesting side note: The themes of If I Forget couldn't be more relevant. As Americans (and the world) learn how to handle and fight the new administration, we're thinking back to lessons learned. Writer, political operative, and activist Beau Willimon pointed out, "Knowing our history and keeping it alive is one of the most important forms of resistance."
Daniel Sullivan Jeremy Shamos Kate Walsh Maria Dizzia off-Broadway play Steven Levenson