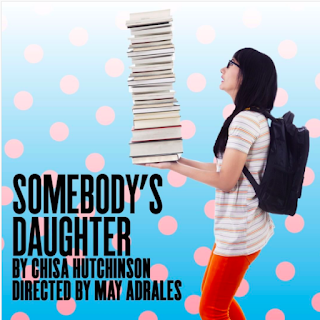 No matter who you are, you're somebody's daughter and, for better or for worse, that means someone has expectations of you and you have either an example to follow or expectations to rebel against. (I suppose the same is true of sons, but right now we're talking about daughters and the unique mother–daughter dynamic.) In Chisa Hutchinson's play, directed by May Adrales, we look at three daughters, all Asian, each at a different stage of their lives.

Alex Chan (Michelle Heera Kim), born in America, is a 15-year-old high school student. She excels academically, plays multiple instruments, and speaks even more languages. On paper, she's somebody's perfect Asian daughter. Her mother is Millie (Vanessa Kai). Millie and her husband, Richard (David Shih) immigrated to the United States shortly after they married. Their dynamic is such that Richard is responsible for working and providing for the family; Millie is responsible for raising the family. (The family, at this time, is just the three of them; there's no son, which is a point of contention.)

Feeling unseen, Alex goes to her high school guidance counselor, Kate Wu (Jeena Yi), for help. While Kate seems to sincerely care about her students, she could use a little guidance herself: shortly after we meet her, we see her blow it with her boyfriend, Reggie (Rodney Richardson), an African-American man. A little later we'll meet Alex's crush, the all-American, white, high school guy, Russ (Collin Kelly-Sordelet (The Last Ship))

I was thoroughly engaged in these daughters' stories and found myself unexpectedly moved toward the end. Alex's journey is part coming-of-age, and deals with first love; I usually groan at such storylines, finding them trite, but not this time. The burgeoning romance between Alex and Russ was sweet, and seemed good for Alex. I'm a daughter, so I know firsthand how daughters' actions and life views and relationships revolve heavily around what their mothers think of them. I was comforted to see the way these women grew and came to terms with being somebody's daughter.
Chisa Hutchinson Collin Kelly-Sordelet David Shih Jeena Yi May Adrales Michelle Heera Kim off-Broadway Rodney Richardson Second Stage theatre Vanessa Kai