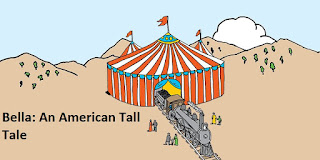 The Wild West is an iconic American place and time, and the tall tale is a uniquely American storytelling device so, naturally, playwright Kirsten Childs uses both to tell an American story that is conspicuously absent from American lore.

Bella: An American Tall Tale was inspired by some street gawking Childs witnessed. As she describes in the program notes, she was walking down the street behind an African-American couple, and every man that passed took time to look (stare? leer?) at the woman's ample behind. (She notes that the men were "so spellbound they'd even forgotten to catcall.) Rather than seeing this as blatant street harassment or objectification of women, Childs saw an African beauty ideal being worshiped.

A Euro-centric beauty ideal pervades society. Pretty much since Twiggy, magazines have been covered with white (often blonde) women who have waif-like bodies: skinny, straight, and with "normal" size features (noses, lips, etc.). In recent years, that standard of beauty has diminished a little (though not enough, in my opinion; even "real women" with curves, for example, can only have curves in certain places—they still must have a flat stomach to be desirable), but that Kate Moss look is still overwhelmingly seen as the ideal and valued over other looks. So Childs was heartened to see men celebrating this zaftig woman, and endeavored to write a musical celebrating the big booty.

Enter Bella, the "Big Booty Tupelo Gal." It's the late 1870s and Bella (an impressive Ashley D. Kelley) is on a train heading west. She has a wild imagination, and carries with her stories and lessons of her ancestors (the early song "The Language of My Nose and Lips and Hair" captures this well), including the "spirit of the booty," whose mission is to get Bella to embrace and harness the beauty and power of her behind.

While she's on her Wizard of Oz–like journey to acceptance, she meets a cast of characters, many representing overlooked Wild West figures Childs discovered in her research for this show. There's Diego Moreno (Yurel Echezarreta), the gaucho; Miss Cabbagestalk (Kenita R. Miller, who doubles as Bella's mom), a mail-order bride; Tommie Haw (Paolo Montalban), an Asian cowboy (did you know one in four cowboys at that time were people of color?), who does an impressive striptease (yeah, they have fun); and many others.

Bella also pines for her love, Aloysius (Britton Smith), a Buffalo Soldier with whom she exchanges love letters, but is thrown for a loop when she meets the train porter, Nathaniel Beckworth (an understated yet transfixing Brandon Gill). (Childs draws an interesting comparison between Aloysius and Nathaniel and their takes on masculinity.)

Dramaturgically speaking there are some bumps along the way, particularly in the second act. I saw the show early in its run, and there are a couple of numbers that stop the show in the wrong way; they seem out of place and/or aren't the full-fledged 11 o'clock numbers they aim to be. Still, I was taken with this celebration of a different take on beauty. Yes, I am a white woman with European roots, but I do not fit into the sample size. Though I can't begin to know what it's like for a person of color to be bombarded with photos of white people and hear, "That's beautiful," I do know what's it like to see a single body type held up as the ideal—a body type that is foreign from my own, and so I saw myself in Bella more than in any number of traditional musical theatre characters.

A note about the scenic design (by Tony winner Clint Ramos (Eclipsed, Sunday in the Park with George)): the playing floor is a wooden turntable. I could only see it as an allusion to Hamilton (which David Korins designed). The opening song (and its reprise that serves as the finale) talks about history from the scholars and other history. "History is the tale from the book of the scholar but some history is taller than the tale," the company sings, and it's your history, too. I believe you know Hamilton is all about history having its eyes on you, and wondering, "Who lives? Who dies? Who tells your story?"

So while Hamilton is telling a traditional American story with non-traditional casting, Bella (directed by Robert O'Hara (Bootycandy, Barbecue)) is telling another American story, not just by people who aren't usually in the story but about people who aren't usually part of the story—and it is an American story. And to the old (white) woman sitting in front of me who left at intermission and said, "It's too long. They're very talented but it's just the beginning [of the run]. They have a lot to fix.": You should have stayed. You, with your judgmental attitude and small mindedness needed to see and experience this story, this celebration of the forgotten, overlooked, and misaligned. Here's to the big booty Tupelo gal, and all the women—past, present, and future—whose bodies break the mold.
Ashley D. Kelley Brandon Gill Brittan Smith Kenita R. Miller Kirsten Childs musical NaTasha Yvette Williams off-Broadway Paolo Montalban playwrights horizons Robert O'Hara theatre Yurel Echezarreta