The New York City Ballet Spring 2010 season, Architecture of Dance, has begun. This season will include seven world premiere ballets by both established and emerging choreographers and the sets for five of those new pieces are designed by renowned architect Santiago Calatrava. Though I will be seeing three world premieres this season, on Saturday - my first ballet of the season - I saw three pieces from City Ballet’s canon. And even though these were not new pieces, it turned out I was still in for some surprises.

The first surprise came when I read the program notes as I was waiting for the ballet to begin. Saturday’s program included “Serenade,” “2 & 3 Part Inventions” and “I’m Old Fashioned.” I realized that I had already seen “I’m Old Fashioned” in a previous season and loved it. A smile showed up on my face as I knew I would have that to look forward to as the final piece of the afternoon. 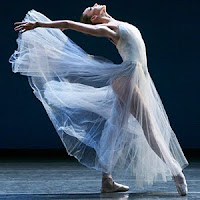 The second surprise came while watching the first piece, “Serenade.” I was surprised because I enjoyed it and yet it was a Balanchine piece. You may remember from previous ballet reviews that I’m not a huge Balanchine fan, but this was actually very lovely. And historic. According to the program notes, “Serenade” is the “first original ballet Balanchine created in America,” and has long since been a part of City Ballet’s repertoire. As it began, the stage filled with female dancers dressed in flowing ice blue tulle. There was a lovely, ethereal look and the dancers suggested fairies dancing on clouds. They moved in beautiful formations and the movement had a bit of whimsy to it, all the while displaying expert tecnique that complemented the music. What followed was a lovely pas de deux, which suggested that perhaps the first movement - which only featured women - was a group of friends getting their leading lady ready for a date. Again, kind of whimsical and, in my opinion, unexpected from Balanchine. I was a little disappointed, however, with the final movement - which I’m not sure I totally understood. The dancing was nice, but basically the vignette looked like the opening title sequence from Big Love: One man and three female dancers holding hands and fluttering about in a circle. This made an otherwise pleasant piece ultimately unsatisfying. 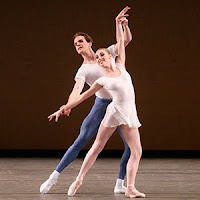 The third and final surprise of the afternoon was that the second piece, the Jerome Robbins choreographed “2 & 3 Part Inventions” was only ho-hum. There was nothing particularly bad about it but there was nothing particularly exciting or moving, either. For my taste, “2 & 3 Part Inventions,” which featured several pairs of dancers shadowing each other, served as a light, pleasant diversion - a sorbet to cleanse the palate between “Serenade” and the fabulous “I’m Old Fashioned.”

“I’m Old Fashioned” is an homage to Fred Astaire. The Morton Gould score consists of variations on a theme originally written by Jerome Kern. Kern wrote the song “I’m Old Fashioned” (and Johnny Mercer wrote the lyrics) for the Fred Astaire-Rita Hayworth film, You Were Never Lovelier. Not only was the music a variation on a theme, but so was the dancing. Robbins was inspired by the choreography in the film (choreography 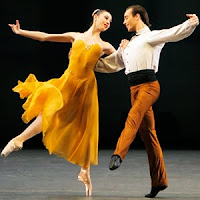 that was created, in part, by Astaire) and each movement in the piece is a variation on the original dance sequence. A dance sequence which is screened on stage prior to the City Ballet dancers taking the stage. It’s really quite fun: You watch Astaire and Hayworth glide across the veranda, Hayworth’s beautiful black gown flowing behind her, and then you watch the dancers as they bound across the stage with movement reminiscent of Astaire and Hayworth’s. With the city skyline as the backdrop and the lush swing arrangements, “I’m Old Fashioned” feels like such a quintessential New York piece. But the ending is really the best part: About twenty dancers flood the stage and recreate the Astaire-Hayworth dance sequence with the film playing in the background. Robbins’s and the dancer’s reverence for Astaire is palpable in this beautiful tribute to one of our finest dancers. City Ballet, you were never lovelier!