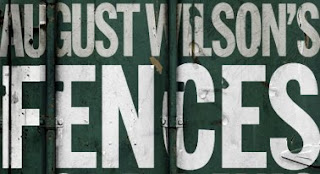 One of the things about going to see anything, whether it’s a movie, a concert or a play, out in public is that your fellow audience members can shape your experience - for better or for worse. In my years of theatre going, this was perhaps never more clear than when I saw Fences on Wednesday afternoon.

August Wilson’s Fences has never been one of my favorite plays. I read it in college and got through it because I had to, not because I found it particularly compelling. Watching it come to life, and especially with the expert performances this current revival boasts, I came away with a greater appreciation for the work - but I think I would have enjoyed it more, or connected to it more, had the audience behaved differently.

Throughout the play, audience members were vocally reactive to the story. And I’m talking about more than just hooting and hollering with entrance applause for stars Denzel Washington and Viola Davis (both of whom were terrific.) And I’m also talking about more than laughing - though I did have a problem with the timing of some of their laughter, but more on that in a moment. Many audience members were effectually talking back to the characters in the play. You know how sometimes if you’re home by yourself, on your couch and watching a scary movie you’ll tell the ingenue, “No! Don’t go out there - the killer’s out there!”, or if you’re watching That Thing You Do, after Faye tells off Jimmy you testify, “You go, girl!”? Well, that’s okay if you’re by yourself - and maybe it’s acceptable if you’re in your home and amongst friends (or someone who can stand your running commentary) but it’s not okay when you’re in a theatre - whether you’re watching a film or a live show. Your comment intrudes upon the other audience members’ experience and in live theatre it’s just plain rude to the actors who are trying to live within the fourth wall and bring you this experience.

As much as I disapprove of talking back to the screen or stage, in this instance it didn’t bother me as much as the inappropriate timing of the audience’s laughter throughout the play. Yes, some things were meant to be funny and I was laughing along side everyone else. But it’s not funny when a son stands up to his domineering father, takes a swing at him, misses, and has his father shove him to the ground and threaten to hit him with a baseball bat. Not funny at all. And yet, people laughed. A similar thing would happen in Spring Awakening during the beating scene. Wendla asks Melchior to hit her with a switch she found because she wants to feel something. It’s actually a rather heart wrenching scene and yet, invariably in the ten times I saw the show, someone would laugh when Melchior beat Wendla. I suppose this could be explained by the phenomena of people laughing through discomfort, for lack of any other way to react. But it just doesn’t sit right with me. And this happened several times throughout the play.

There may be another reason people were laughing. August Wilson wrote about the black experience in America. Each time one of the plays in his ten-play cycle was produced, with one exception, he insisted on a black director because he felt that a white director couldn’t fully understand what was going on and therefore couldn’t properly direct the piece. (Last season’s revival of Joe Turner’s Come and Gone - the play that POTUS and FLOTUS took in on date night last May - was the first major August Wilson production to be directed by a white person. Mind you, this came about after Wilson’s death; his wife and estate okayed the director, saying August would have approved.) Given the subject matter of Fences and the stars, Washington and Davis, it should come as no surprise that a majority of the audience was black. Feeling - rightfully so - in the minority and finding much less to laugh about, I wondered if being white made me have a different experience - if perhaps there are mores in black culture that made certain things funny to the black audience members and not to me. I’m trying to remember the discussions my play analysis class had when we read this in college. I don’t remember finding the material funny. I also don’t remember the black students pointing out much that I didn’t understand, but I do remember them defending Wilson’s position that a white person couldn’t fully understand the black experience in America. Personally, I would like to think that we could look beyond race and just direct these pieces as stories of people and family and relationships, but I know that’s not realistic.

In any case, I certainly enjoyed the performance much more than I thought I would. There were moments that were very moving, especially the show downs between father and son, and the second act blow out between husband and wife. (I did feel that some of these highly emotional scenes didn’t linger in the moment long enough for my taste - that the scene would end too abruptly or there’d be some comedic gag to lighten the mood a little too quickly - but the moments were there.)

Everyone gave a great performance. Chris Chalk more than held his own as Cory, Troy and Rose Maxson’s son. This is noteworthy because he was holding his own against Denzel Washington’s Troy. I remember watching Glory in middle school and being astounded at the intensity Denzel brought to the role; he brought nothing less to Troy and gives a powerful performance. Best of all was Viola Davis, already a Tony winner for an earlier August Wilson work, King Hedley II, and a Tony nominee for her portrayal of Rose. You remember in Doubt how she made an indelible impression in just one scene? She does the same here. Yes, she’s in more than one scene and in each she’s a beacon of quiet strength. But it’s really her act two tirade against Troy that almost made me call out, “You go, girl!” Davis’s Rose is a strong woman, not to be trifled with, and when Troy reveals a damning secret she rips into him. It moved me to tears and was well worth the price of admission.