"Donizetti Variations” was nothing to write home (or on a blog) about. The corps de ballet looked sloppy and their sloppiness was all the more apparent when principal dancers Megan Fairchild and Joaquin De Luz took the stage. The second movement featured only Fairchild and De Luz, and served as some fun fluff to watch. It actually reminded me of “Stars and Stripes” (a Balanchine ballet inspired by and featuring John Philip Sousa’s music, which will be part of City Ballet’s 2010-2011 season); Fairchild and De Luz basically took turns coming out on stage, jumping around and thrilling the audience before engaging in a feisty pas de deux. Their skill and sharpness made clear the difference between principal dancers and corps de ballet members. Or so I thought.

As I watched the next two pieces of the program, both of which prominently featured corps members, I came around to the conclusion that the sloppiness of the corps in “Donizetti Variations” was perhaps purposeful - that the choreography was meant to be more free form and less Rockette-like. While that may have been the case, I didn’t care much for the piece. But the next two more than made up for it. 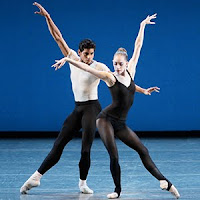 Next up was “Stravinsky Violin Concerto.” This ballet represents Balanchine’s second pass at choreographing to this particular piece of music. The repertory notes say that Balanchine made a dance to the music in 1941 for the Ballet Russe. Three decades later, in 1972, he returned to the music but couldn’t remember his choreography so he started over. Of course, I have no idea what the original choreography was, but I thoroughly enjoyed this piece so I say, “Here’s to forgetting!”

This piece showed both skill and passion, a combination I usually find lacking in Balanchine’s ballets. Going in, I was inclined to like it because Robert Fairchild and Sterling Hyltin were dancing and they didn’t disappoint - but neither did anyone else. The first movement, Toccata, was fun and flirty. It began with each principal dancer, Fairchild, Hyltin, Maria Kowroski and Sebastien Marcovici, taking a turn coming out on stage, backed by four corps dancers of the opposite sex. Next, both pairs of principals -Fairchild and Hyltin, Kowroski and Marcovici - came out for a mini pas de deux before reemerging with the corps, guys backed by guys and gals backed by gals.

After Toccata were Arias One and Two. This is where it got really interesting. Each aria was a pas de deux with Aria One featuring Kowroski and Marcovici and Aria Two featuring Hyltin and Fairchild. Both had a beautiful, languid feel to them - almost as if the dancers were moving underwater as the literally wrapped themselves around one another.

I enjoyed the second aria most because I really like watching Hyltin and Fairchild dance. Hyltin always looks like she’s having a good time dancing, and there’s little that I like more than watching someone enjoy what they’re doing. And Robert Fairchild is just such an incredible dancer. He moves about the stage with undeniable precision - there’s no hesitation in his movements - and he bounds across the stage with such ease and air you’d think he was on strings. He is one of the most exciting and engaging dancers in the company. The two each have wonderful energy on their own and their chemistry when dancing together is amazing. I’d like to see these two continue as a pair as they grow with City Ballet.

Completing the piece was the final movement, Capriccio. This was reminiscent of Toccata and featured the entire cast leaping all over the stage with great skill and energy to spare.

The final piece of the evening was the reason I came: “NY Export: Opus Jazz.” Next to “The Four Seasons” (which is part of the 2010-2011 season!) this is probably my favorite ballet. You may remember from previous Reviewing the Drama posts that this was the first City Ballet I ever saw; you may also remember that not too long ago a film adaptation, produced by and starring City Ballet company members, was aired on PBS. That film brilliantly captures the spirit of the ballet and is 100% worth seeing. However, there’s still nothing like seeing it live on stage. (It’ll be a part of the 2010-2011 season; if you can’t make it to the State Theatre, or you just can’t wait to see it, fire up your Netflix queue. There’s no release date for it yet, but you can save it to you queue so when it is released, you won’t miss a beat.) 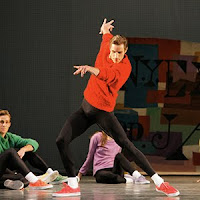 What I love about “NY Export: Opus Jazz” is that it beautifully captures a youthful exuberance. The dancers snap (literally,) crackle and pop across the stage, and clap and stomp their way through the city as they express the love, rage, confusion, passion and dynamite determination coursing through young people. This is not unlike the choreography in American Idiot. In both pieces, you clearly see the emotions of the characters shining through the affecting choreography. In the original program notes from the ballet’s debut it says, “Feeling very much like a minority group in this threatening and explosive world, the young have so identified with the dynamics, kinetic impetus, the drives and ‘coolness‘ of today’s jazz steps that these dances have become an expression of our youths‘ outlook and their attitudes toward the contemporary world around them.” This sentiment is unmistakable in “NY Export: Opus Jazz,” a classic ballet that feels ever present and totally modern and contemporary in 2010.