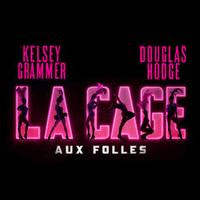 Dare I say La Cage aux Fail? Maybe not, since those fierce Cagelles would probably come at me for retribution, but I certainly didn’t love all the glitz and glamour.

La Cage aux Folles is currently enjoying its second Broadway revival, this time fronted by a television star, Kelsey Grammer, which would explain all the hooting and hollering from the audience. This family tale, much like The Addams Family, ultimately concerns a (grown-up) child bringing home a lover and her family to “meet the parents” and wanting one normal night. Jean-Michael’s parents are Georges and Albin, a gay couple living and performing on the French Riviera. Jean-Michael announces he is getting married to Anne (to which Georges and Albin react with shock: He’s marrying a woman?!?) and he intends for Anne’s conservative parents to meet his father, Georges, and his biological mother, Sybil. I suppose that’s really more the plot than what the show is about. It’s really about relationships and family dynamics, which has the makings for an emotional show but instead all we get are histrionics.

Almost everything here is played for laughs, which I guess is okay except that there’s no emotional depth to the piece. You don’t feel for any of the characters - none of whom, in my opinion, have any chemistry with one another. I’m not sure how the story was told in its original Broadway production, but in this revival it feels like there were plenty of missed opportunities for exploration and pathos.

Watching the gays on display, I was reminded of what I call the Do the Right Thing problem, which is something NY Times theatre critic Charles Isherwood alluded to earlier this season when speaking about his discomfort with Fela! There’s a scene in Do the Right Thing, the seminal Spike Lee joint about race relations in Bed Stuy, which really speaks to the social context of the film. Pino, an Italian American who runs the neighborhood pizza shop, is making fun of black people, again, and using derogatory language. Mookie, a black community member, takes him aside and asks who his favorite athletes and movie stars and musicians are. Pino’s answers are all black men. Mookie’s points out “they’re niggas, too.” Pino says they are not – they’re something different. Pino doesn’t see Magic Johnson, Eddie Murphy, and Prince as real black people so he sees nothing wrong with making racist comments about the pizza shop’s patrons. This hearkens back to the days when blacks were breaking into the white entertainment business in the form of minstrel shows - it evokes Sambo; the black people are here for our entertainment and that’s why it’s okay to like them. Isherwood discussed discomfort with Fela! because he felt like the blacks were here to put on a show for him and as a white man that made him uncomfortable. I didn’t have the same reaction to Fela!, but it did cross my mind while watching the cross-dressers. The lack of emotional depth allowed in this production of La Cage made me feel like the gays were on display and that the only way audiences could accept gay characters on stage is for the homosexuals to ingratiate themselves by putting on the ritz. Maybe it speaks to our society that that is still necessary, as La Cage is selling pretty well at the box office and Next Fall, which also deals with relationships and family and homosexuality - but in a real, raw, honest and emotionally challenging way - is struggling. Or it could have something to do with the fact that La Cage boasts a TV star.

And the TV star isn’t that great. None of the featured actors are. Everyone has a character voice, which is to say none of the actors have strong voices or great range. Except Les Cagelles. Les Cagelles are fantastic. Six Cagelles, or back up dancers, periodically grace the stage and wow us with phenomenal dance numbers. Of course this was showy, but that was the device: Like traditional book musicals, there was a show within the show and Les Cagelles were performing for the audience within the show. The expert dancing and thoroughly entertaining performances from Les Cagelles is yet another argument for some sort of ensemble award at the Tonys.

Speaking of the Tonys, La Cage fared very well in the nominations (which, I might add, also boosted their box office: They were not playing to 92% capacity before the nominations came out) and perhaps with that in mind I took a little judgment with me to the show. The whole time I couldn’t help comparing the various actors and elements to other shows which either are not favored to win or didn’t get nominated at all. For example, after seeing his performance, I am even further convinced that Grammer did not deserve his Tony nomination, and certainly not at the expense of, say, John Gallagher, Jr. And as Jacob, the maid, Robin de Jesus is funny, but he was basically playing the stereotypical sassy gay best friend; he was nominated for best featured actor in a musical meanwhile the immensely talented Tony Vincent was left out. Maybe the nominators really liked Grammer and de Jesus’s performances better; or maybe they were just afraid that if they didn’t nominate those two Les Cagelles would retaliate.

For a different and more favorable take, read the NY Times review.