I liked Red. But saying I liked it isn’t sufficient for Mark Rothko, the artist whose work, and work ethic, is explored in this new, two-hander play from John Logan.

The dialogue begins with Rothko, played by Alfred Molina, asking his new assistant, Ken, played by Eddie Redmayne, what he thinks of the Rothko painting in front of them. Ken (whose name we know only from it being printed in the program) says he likes it. Rothko responds by saying, “Of course you like it.” And then he challenges Ken to say more. That people aren’t discerning enough is one of many points Rothko will make throughout Red, and all points lead to Rothko struggling with his identity as an artist. 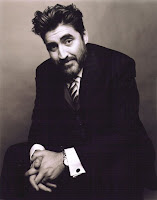 We first meet the artist when we enter his studio; that is, when we enter the theatre. While settling into my seat, I noticed the house lights were very low. Not all of the lights, like those in the giant chandelier hanging from the ceiling, were on. I then turned my gaze to the stage and noticed that Molina as Rothko was already seated on stage, with his back to the audience, looking at his latest work. I like this design and directorial choice because it immediately immersed us in Rothko’s world. Later in the play, Rothko and Ken would talk about lighting and how it affects paintings. Rothko argues that the proper lighting can make or break the work, which would explain why (as I learned in biographical notes included in the Playbill) that Rothko was so protective of where his work would be hung, shuddering at the thought that it might ever be “over-mantle.”

Before I wade into the themes of the piece, I should talk a little about the execution. I thought this was a near flawless production. Both Molina and Redmayne gave strong and affecting performances. Molina’s Rothko is domineering and difficult; Redmayne’s Ken is eager and a bit deferential, but ultimately a person with a strong backbone. The lighting design by Neil Austin was just right, hitting at just the right points at just the right levels to make the paintings pulsate, as Rothko intended. The most exciting part of the play was watching Rothko and Ken paint. I think one of the scariest things for an artist is a big, blank canvas. When presented with one, Rothko and Ken take to priming the canvas - covering it in red paint with such a fury you could almost see them conquering some demons.

At rise, Rothko has been commissioned to create a series of murals for the Four Seasons restaurant, and he has hired Ken as his assistant. Over the course of two years, master and apprentice build frames, stretch canvas, mix colors, paint and discuss the merits of art and artists.

Early on in the play, Ken says his favorite artist is Jackson Pollock. This gets a rise out of Rothko, who came up in the painting world with Pollock, and the differences in the two make for some interesting discussions. Rothko says that art is all about thinking and it’s only 10% about painting. Ken later comes back to this assessment and argues that Pollock is Dionysus and Rothko is Apollo: Dionysus, the god of wine and revelry, moves from a place of passion. As such, Pollock painted with a passion - and without thought or much studying. He splattered paint on his canvases as his emotions drove him. Apollo was known for being careful, thoughtful and deliberate. This is Rothko. He layered his paintings: he would paint a layer, then think about it for three weeks, all the while studying the painting and thinking about philosophers, and then come back and add another layer; he would continue this until the painting was finished. (Though, when Ken asks him how Rothko knows when it’s finished, Rothko doesn’t quite answer.)

I found this dichotomy to be so interesting. While I can understand Rothko’s point and believe it is important for artists of all stripes (or paint strokes) to know artistic history, I’ve always identified with Pollock: art should spring from your core; it should be something visceral you’re trying to get out, not the result of meticulous planning. Maybe not so coincidentally, I’ve always been moved by Pollock’s work. I don’t care much for impressionist paintings, but let me stand all day in front of one of Pollock’s masterpieces in the MoMA and I’m happy. I see movement in the chaotic splatter; I see music; I see emotion; I see everything Rothko wants you to see when looking at one of his paintings - yet I see it in art that was created in a way that was antithetical to Rothko’s credo.

This credo was also typified by music. Most of the play is underscored by classical music - Rothko’s choice. Before painting - or studying - he puts on classical records. This seems perfect for Rothko as classical music, as I understand it, is methodical and thought out. This is later juxtaposed by a Chet Baker record. Ken comes to the studio early to work on building a frame. He puts on the Baker jazz record as he works. Jazz is totally from the soul - it’s improvisational and not at all thought out. Not so surprisingly, when Rothko enters and hears the jazz music, he is enraged and immediately demands that Ken turn off the racket. (Fun side note: The difference in the rigidity of classical versus the free-flowing feel of jazz is presented in a sweet scene in Next to Normal when Natalie and Henry begin their courtship.)

Another debate had by Rothko and Ken is the merit and value of art. (I found this debate to be ironic in light of my feeling of whether Red or Next Fall should win the Tony. More on that in a moment.) Ken tells Rothko he’s been looking at some new pieces by pop artists, like Andy Warhol. Rothko is disgusted (perhaps because he is feeling left out of the moment and struggling to keep his own work relevant). That isn’t art, he bellows. It’s only of the moment - there’s nothing enduring about it. Ken, standing up to Rothko for the first time, argues that that’s okay. That art is supposed to express what’s happening in the zeitgeist at that moment. (If you’ve followed my reactions to American Idiot, you’ll know I agree.) This, according to me and Ken, makes Warhol’s and his contemporaries’ works valuable.

(My Tony thoughts: While Red is a great play, Next Fall is so very of the moment. I think these awards should honor not just excellence but what was excellent for the year in which it was presented. Citizen Kane was highly praised for being revolutionary when it came out. I don’t think it holds up - I fell asleep several times while trying to watch it. But that doesn’t mean it wasn’t the best for the time it was made. As such, I think Next Fall represents art representing what is happening right now. While Red is absolutely relevant to any time - we will always argue over art - it is not of-the-moment the way Next Fall is, which is why I think Next Fall should win the 2010 Tony for Best New Play.)

The ultimate question in Red is: What is art, and what is valuable? And who is to say? I think, much like beauty, it’s in the eye of the beholder. My classmates and I had this discussion in college when we read the wonderful Art, a play by Yasmina Reza (who wrote the current God of Carnage) which, as it happened, once starred Alfred Molina. In Art, a man has bought an expensive piece of art and asks his two friends what they think of it. The painting is described as a nearly blank canvas with a faint (perhaps nearly indiscernible) gray line across the bottom. The man who bought the piece thinks it’s art. One of his friends says he got robbed - it’s just a blank canvas. The three go on to argue over what is art. In my play analysis class, we argued over it, too. One of my classmates argued that if she’s walking down the street and sees a bird perched on a railing, she might look at it and think it’s art. Someone else might say it’s just a bird perched on a railing. Who’s right?