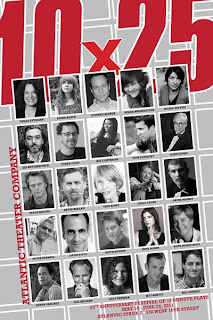 I had a delightful afternoon at the Atlantic Theater Company’s 10x25 series of one act plays. Throughout the three-series run, a total of 25 playwrights will present 10-minute one act plays. On Saturday I saw Series B, which consisted of one acts from eight playwrights, including favorites (and reasons for going!) Annie Baker and Jez Butterworth, and starring a troupe of actors including favorites Reed Birney and Michael Chernus.

Each one act was entertaining, especially for just ten minutes. I’d break down the eight one acts into three groups: Some were perfect as ten minute one acts. I wouldn’t have minded spending more time with the characters, but I wasn’t left feeling a need to learn more; characters’ journeys were satisfactorily explored within the brief time we spent together, and the story was fully encapsulated within those ten minutes. Other one acts had a more contrived ending, like the playwright was looking for an ending, instead of searching for a truthful conclusion. I didn’t feel like I wanted to learn more about those characters and stories. But some of the one acts (in particular, the ones written by Baker and Butterworth), left me wanting so much more.

I know that on occasion I’ve mentioned that I wanted more from a play and I’ve meant that as a criticism of the play. I don’t mean it that way here. I only got ten minutes with these characters; I only got to know a tiny little bit of this story and I’m eager to know more. The one act served as a great tease and would most definitely get me back in the theatre if the one act was expanded to a full length play. 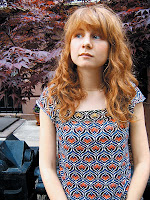 Take Baker’s play, Practice, for example. It opened the series and came complete with her hallmark: silences during which nothing is spoken but so much is said. In Practice, a long-time practicing Buddhist (Birney) is conducting a class to help people practice a particular meditation technique. Half of the one act is the cast just sitting there, in a silent meditation. But that’s not really all that’s going on. You watch each actor’s face, and you realize there’s a lot going on; Chernus’s character is looking around the room at each other student, trying to figure them out. Other characters are clearly having trouble clearing their minds. Still another character’s cell phone rings. When the one act finished, I was literally on the edge of my seat, and my breath caught as the lights went to a blackout. I would love to spend hours with these characters.

A friend asked me if these one acts are the precursor to a full length play. In the case of Practice and others from this series, I certainly hope so.

Herein, a brief rundown of the one acts:

Visit atlantictheater.org to learn more and purchase tickets to this or another series.