Spider-Man: Turn Off the Dark 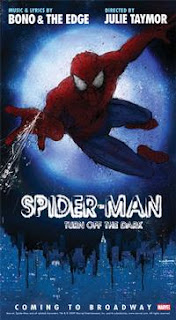 What a difference six months, the firing of a director and a nearly month-long hiatus makes. I saw Spider-Man: Turn Off the Dark back in December - the show's second preview, to be exact - and I saw it again this month. I’m happy to report that the problems in which Spidey was getting tangled have been solved and this Spider-Man is actually really good!

This iteration isn’t an entirely new show, but it might as well be. It’s about 17 times better than what came before. The story is actually there and focused. The songs are complete - not just snippets - and some of them are particularly moving. Mercifully, the Geek Chorus has been 86ed, as has Norman Osborn/the Green Goblin’s out-of-left-field Colonel Sanders accent. Plus, Arachne’s storyline is significantly trimmed down, making the story about Spider-Man, not Arachne. (What a concept: Making a Spider-Man musical that actually focuses on Peter Parker/Spider-Man!) And when Arachne does appear now, she appears as Peter/Spidey’s muse, not his opponent. This version’s greatest triumph is that there are actual relationships among the fully fleshed out characters - there are people to care about and root for. Most wonderfully, the role of Mary Jane Watson has been expanded and developed, giving the talented Jennifer Damiano something to do - and she does it very well.

There are still homages to the comics that begat Spider-Man, which I think is a good thing. There are still musical references to U2 (like “Vertigo” being played in club scene), which is fine. There are still funny asides to theatre insiders (like jokes about The Fantasticks and about The Post being an unscrupulous tabloid rag) as well as a bit of self-deprecation (like when the Green Goblin talks about Oscorp being a $65 million circus, $65 million being this show’s hefty price tag). Those pieces worked before and they work here.

The show doctors who were brought in (book writer Roberto Aguirre-Sacasa and “creative consultant” (read: new director) Philip William McKinley) were able to keep the spectacular visual elements created by original director Julie Taymor and re-purpose them into a streamlined, cohesive story. Now, the story sticks much closer to the Spidey lore we know and love. (Most of the plot is similar to the action of the first Tobey Maquire Spider-Man movie.)

Peter Parker (Reeve Carney) lives in Queens with his Aunt May and Uncle Ben (Isabel Keating and Ken Marks, respectively). His next door neighbor, classmate and lifetime crush is Mary Jane Watson (Damiano). The story begins with Petey giving a class presentation about the legend of Arachne (T.V. Carpio), who maddened Athena when, in a weave-off, wove something profane into her creation. Peter’s classmates bully him and, as Peter Parker, he can’t stand up for himself.

When Peter and MJ’s class visits Oscorp, the science lab run by Norman Osborn (Patrick Page), a genetically altered arachnid gets loose and bites Peter, thus imbuing him with his spidey-senses. Peter discovers his newfound power and vows to use it for good. (After all, with great power, comes great responsibility.) Osborn, seeing there is a spider man out and about, is compelled to test his other creations on himself - to subject himself to genetic mutations in an effort to make him stronger. (His motto is “mutate or die.”) With his newfound powers, Osborn becomes the Green Goblin and proceeds to wreak havoc on New York City, constantly challenging and taunting Spider-Man.

All the while, Peter struggles with balancing his work and private life. (Thing is, his work is being a super hero!) He has to learn how to be there for MJ and for Aunt May without putting them in danger. Such issues for a young man!

But you know what I like about this? Peter Parker is a good role model. At its core, Peter’s journey is one of self-discovery. He ultimately needs to learn to believe in himself; to stand up for himself not just with brute but also with brains. He sees injustices in the world and he’s using his power responsibly to do something good. I think this is a terrific lesson for kids to learn, which is fortunate since kids have been and will continue to make up a large portion of Spider-Man’s audience.

And that’s another good thing. This show is going to get kids into a theatre. It’s going to - hopefully - spark in them an interest in the arts. One of my favorite moments of the night didn’t take place on stage. Instead, it was when the little kid sitting in front of me recognized the leitmotif that was played each time Spidey swung into action throughout the theatre. This kid heard those notes and instantly perked up, looking around the theatre to catch a glimpse of his favorite super hero. Sure, this seven year old doesn’t know what a leitmotif is, and he may not consciously be aware of what he was reacting to, but he was paying attention and he was making connections to and within the music. If this terrific spectacle can do that for just one kid - heck, one person - at each performance, then I’m sold.

Aside from the new, now solid book, the score (still written by Bono and the Edge) has greatly improved. When I saw the old version, my biggest complaint about the score was that there weren’t enough full songs. There were several snippets of songs but only about three full-length songs. Not so anymore. This score is great and has stayed with me days after. 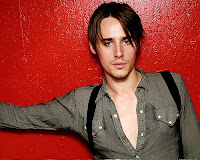 “Bouncing Off the Walls” is still a rocking, fun number that Peter sings as he discovers his powers. “Bullying by Numbers,” though not a particularly uplifting song, has fantastic harmonies. “Rise Above” is a touching number between Peter and Arachne; “Picture This” incorporates Bono’s world view; “No More” is a classic musical theatre number in the sense that it really serves and furthers the story. “I Just Can’t Walk Away” is a terrific stand alone song, and I wouldn’t be surprised if U2 played it on tour. “If the World Should End” was in the original version but its placement in this version (it comes earlier in the second act than it had) makes it so much more moving and powerful. It’s a beautiful song between Peter and Mary Jane that lets Damiano, in particular, shine. And then it’s “The Boy Falls From the Sky,” Petey’s big number. This is what his journey’s been leading to and it’s thrilling. Carney lets it rip and really shows off his vocal chops in this number. And I love the staging. Several spider men appear behind a translucent scrim and serve as background dancers, for lack of a better term, as Peter sings his heart out. It’s a great visual moment. (Choreography for the show is by Daniel Ezralow with additional choreography by Chase Brock.)

So now that the meat of the show is there, what about the aerial stunts? They’re still just as stunning, if not exactly the same as before. The most noticeable change is the moment that MJ is dangling off the Brooklyn Bridge. In the previous iteration, Spider-Man dove down after her and this was the stunt that caused Christopher Tirney to sustain major injuries. (Tirney is healed, rehabbed and back in the show!) There’s still an effective stunt here, it’s just not as risky as its predecessor. (Or at least it doesn't look it.)

Spider-Man and the Green Goblin still engage in a mid-air battle, the likes of which have never been seen in a Broadway theatre. Perhaps the most fun part, though, is when Spider-Man swings back and forth between the audience and the stage, often times walking through the audience to get to his “launch pad.” The giddy little girl in me came out when Spidey stopped right in front of me, gave me a thumbs up and then leaped off the balcony and onto the stage. I’m glad that I’m not yet jaded enough to be blase about this. It’s pretty damn cool that Spider-Man was thisclose to me before swinging off to fight crime.

That, my dear readers, is the power of the theatre. Theatrical performers have an opportunity to do things you can’t do on film. They have a chance to intimately interact with the audience and sweep them up in the excitement of the theatre. For children, this could be the thing that engages them in art and expression. And for adults, it awakens the child within, offering an environment in which you can open your imagination, forgo your typical adult worries and sense of disbelief and have a truly magical experience.

Visit spidermanonbroadway.com for more information and to purchase tickets. 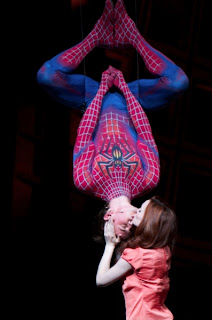