The Emmys are wrapped, dear readers. And just like that, another award season is under way. In a few months, Oscar buzz will kick into high gear, but before we look ahead, let’s look back at the festivities making up the 63rd Emmy Awards.

As always, we begin with fashion. There was nothing too notable, on either end of the spectrum. (Even my worst dressed picks weren’t Bjork-wearing-a-swan bad!) So let’s start with some trends and who wore it better match ups. 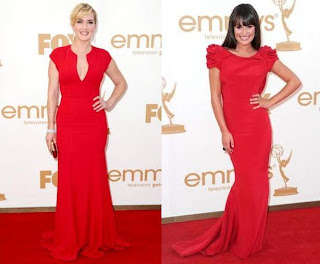 Kate Winslet and Lea Michele showed up wearing stunning red gowns, as did several other women on the carpet. Winslet wore Elie Saab while Michele (who was super glamorous last year in Oscar de la Renta) chose Marchesa. Both looked great in perfectly fitted red power dresses, though I give a slight edge to the smoky-looking Winslet for glamming it up with a sparkly Cartier bracelet.

The Family that Dresses Together… 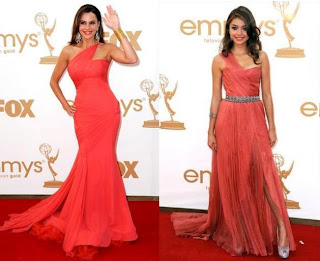 Modern Family stars Sofia Vergara and Sarah Hyland both wore coral-reddish, one-shoulder numbers. Hyland, in a custom Christian Siriano gown, looked fun and fresh, wonderfully age appropriate. Vergara scored in Vera Wang. The dress was a little trendier than we usually see from Wang, but it hugged Vergara in all the right places and she looked strikingly statuesque in the structured gown. 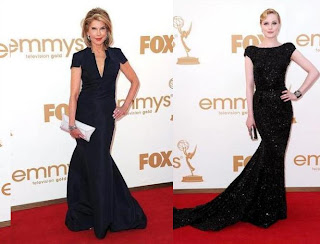 Check out Christine Baranski and Evan Rachel Wood (in Elie Saab) looking like they were poured into their sexy black dresses. Interestingly, in what I noticed as another trend, Baranski and other more mature women were showing off more skin than Wood and her contemporaries. Hooray to women over 18 showing some skin and looking drop dead gorgeous.

Lacing Up the Red Carpet 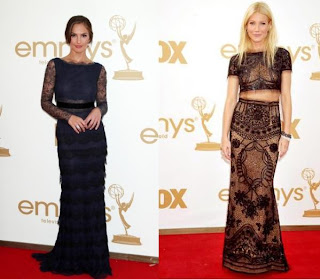 Contrary to what I just said, here’s an instance in which the older woman should have covered up. Take a look at Minka Kelly in Dior and Gwyenth Paltrow in Pucci. Minka, the young starlet, looks classy and sophisticated. Paltrow, the older of the two, bares her midriff and I wish she’d cover it up. She looks like she’s trying (too hard) to be young, hip and edgy. Advantage Minka. 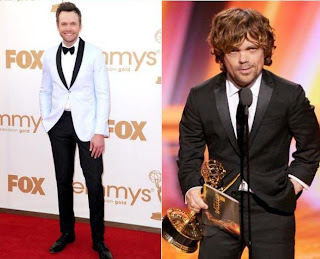 The men were mostly fine, with some standouts listed below. But let’s consider this showdown: Joel McHale vs. Peter Dinklage. McHale, in Michael Bastian, looked like a server in the Catskills. The color of his jacket aside, it seemed to be ill fitting, looking like the tall and lanky funny man had outgrown the tux. On the other hand, Dinklage looked great in a perfectly tailored tuxedo. And, as someone who happens to fancy messy tresses and facial hair, I think the entire look worked for the Emmy winner.

Julie Bowen (right) looked like a sexy, slinky snake in her Oscar de la Renta gown. Cobie Smulders was a breath of fresh air in a refreshingly aqua gown (that is, before she changed into her Emmytone costume). Rob Lowe, Will Arnett and Seth Meyers looked just right in Tom Ford, Calvin Klein and Prada, respectively. Edie Falco took subtle glamour to a whole new level in a nude Randi Rahm dress. And Jon Hamm (in Tom Ford) and Jennifer Westfeld (in a vintage canary yellow goddess dress) were the best dressed couple.

Melissa McCarthy may have been a winner once the awards were handed out, but her dress didn’t make the cut. Partially because it looked like it had been cut up, and then stitched back together. I don’t mind a pattern or some interesting detail to a dress, but the patchwork style of the dress just didn’t look luxe. Rather, it looked more like I could buy this off the rack. And I do not understand the shoulder pads. However, I loved the deep purple color; and the tastefully plunging neckline made McCarthy look taller and slimmer.

Also a winner on stage but not on the red carpet: Julianna Margulies. I usually like the way she looks, but not this time. The shapeless bodice of her Armani Prive gown looked like a lampshade that had been decorated with a bedazzler. It hid all the beauty and curves of Margulies’s body, which, if you’ve seen some of the promos for The Good Wife, you know looks good. A disappointing look from a talented lady.

Did Zooey Deschannel put on that Monique Lhullier dress as a joke? She looked very un-pretty in this pink, frothy, juvenile prom gown, with an Elvira beehive to boot. I don’t know if this is supposed to be cool, but I’m over Deschannel’s “I’m so cute and quirky” act. She is definitely my choice for worst dressed.

And now the award show. I thought Jane Lynch was a fine host. She didn’t have a lot of screen time, which was fine – there were a lot of awards to hand out. (And, mercifully, they did it all in the allotted three-hour time frame.) I liked The Lonely Island’s performance – it brought a little bit of youthful energy to an otherwise kind of stuffy affair. I also liked the commentary as each winner approached the stage. It was snarky and much more spirited than usual. I did not like the In Memoriam segment. Call me crazy, but an In Memoriam segment is not supposed to be a showcase of living people’s talent. Skip the live performances and just show the tribute shots.

Modern Family Goes for the Gold