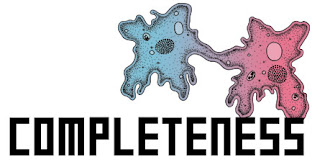 I couldn’t stop singing Joe Iconis’s song, “Nerd Love,” during the intermission of the wonderful new play Completeness at Playwrights Horizons. That’s because Completeness, a new play from Itamar Moses (The Four of Us) and directed by Pam MacKinnon (Clybourne Park), is about nerd love. More specifically, it’s about two scientists, one, Elliot, a computer scientist, the other, Molly, a molecular biologist, and their relationship.

A simple love story in and of itself can be pleasant and satisfying enough (sometimes) but what I really loved here was the layers of complexity within the language. When the scientists are talking about science experiments and processes, they are really talking about love. I thrilled over the double meaning of everything and the specificity of the language.

Example: our two nerd lovers are talking about experiments. One of them says, “data, test, data, test, data, test—until you get it right.” Just like dating! And later the other describes the traveling salesman problem, which can often be the dating problem: there are so many possible combinations, you can’t test them all. You have to just test some select options and hope for the best. And so in act one, we see the scientific process be put in place – the experiment is being field tested.

In act two, we see the results and conclusions. The results are somewhat inconclusive, though. It seems that for the scientists, it’s really all about the experiment – being in the lab trying different combinations. And after each experiment, the scientists “know more for next time.” As Elliot explains, while talking directly about an algorithm but really about love, just because he found an answer doesn’t mean it’s the right answer.

Throughout, Karl Miller and Aubrey Dollar (as Elliot and Molly, respectively) give terrific performances that are as layered as Moses’s dialogue. The fearless actors lay bare their souls (and bodies) for two hours as we track the experiment that is Elliot and Molly’s love. (Brian Avers and Meredith Forlenza are good in multiple supporting roles.)

Moreover, I delighted in the little touches – literally – that director MacKinnon added to the relationship. After their first night together, Elliot and Molly are gabbing in bed; Elliot moves to get up to explain something to Molly and on his way out of bed, he gives Molly a little kiss on the top of her head. Later he randomly and mindless touches her toe, like he’s just checking that she’s still there. Similarly, Molly, while she and Elliot are engaged in conversation, simply and nonchalantly uses her foot to touch Elliot’s knee. It’s those little otherwise benign moments that make being in a new relationship so exhilarating, those moments when you touch the person as often as you can because you can’t quite believe you get to. (In fact, there’s a moment in the play when Elliot stands in awe of Molly and lightly touches her skin; he says he loves this part – when you finally cross that threshold and you get to touch the person you’ve been pining after.)

And, as if all that wasn’t enough, unlike most romantic comedies, this was actually both romantic and comedic!

Theatre is always an experiment; there’s no formula for getting it right. Fortunately for audience members, after rounds of data, test, data, test, data, test (including a world-premiere regional run at South Coast Repertory Theater), Completeness gets not just an answer, but the right one!

Visit playwrightshorizons.org for details and to purchase tickets. Watch the trailer below: