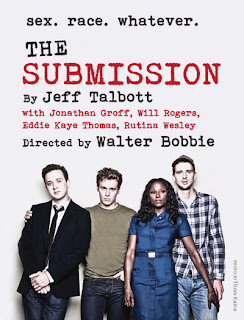 “It’s good to know what you’re capable of.” That’s the lesson learned in The Submission, the new play by Jeff Talbott. Currently running at MCC Theater’s Lucille Lortel Theatre, The Submission is a fine new work that is thought provoking, relevant and necessary to our national dialogue.

Danny (Jonathan Groff) is a gay, white, male playwright. He’s written what his boyfriend Pete (Eddie Kaye Thomas) and best friend Trevor (Will Rogers) consider to be an exceptional play. Tired of readings and workshops and eager to get a full-fledged production of one of his plays up on its feet, Danny submits this exceptional play, which is comprised of four black, down-trodden characters, to festivals under a pseudonym. But not just any pseudonym. He makes up a black woman’s name, Shaleeha G’ntamobi, and, lo-and-behold, gets accepted to the Humana Festival. Great, right? Yes, except that he’s not Shaleeha and the Humana folks need to meet with Shaleeha and have her in the room as they produce Danny’s play. So Danny, being the resourceful writer that he is, hires an actress, Emilie (Rutina Wesley), to play Shaleeha. This convoluted plan is almost as wacky as Dana’s dating plan.

Convoluted as Danny’s plan may be, it sets up some rousing discussions about authenticity and race relations in this country, as well as “ownership” of a particular experience or subject matter.

They say write what you know. But isn’t the wonderful thing about writing the opportunity it affords the author to explore the unknown, to experience something different from his everyday life? That’s certainly a huge part of what makes reading a novel (or watching a movie or a play) so intriguing. If I’m looking for an adventure, looking to discover a different world, I don’t have to go further than my own back yard. I can just read The Wonderful Wizard of Oz and be transported to Munchkin Land. When L. Frank Baum wrote his famous stories, no one said, “Frank, you can’t write this. You don’t know anything about wicked witches and ruby slippers.” So why can’t Danny write about a black family?

This is what I like to call the August Wilson problem: While he was alive, Wilson allowed only black people to direct his plays. He thought that a non-black couldn’t possibly understand the material well enough to successfully direct the play. (A couple of seasons ago, his estate gave the okay for a white director to direct his Joe Turner’s Come and Gone.)

I’ve always taken issue with this. I disagree with Wilson’s implication that you have to have gone through something in order to understand or direct it, or, in the case of The Submission, write it. One of the things I’ve always loved about Aaron Sorkin’s TV shows, particularly The West Wing, is that he creates and writes smart women. He writes women who are intelligent, capable, successful and charming. None of it feels inauthentic. But Holy August Wilson, Batman! Aaron Sorkin is a man, not a woman. How could he possibly know and therefore successfully write the voice of a strong, independent modern woman? I’ll tell you how: He researches and observes and collaborates. Don’t you think that if Sorkin ever wrote a line for CJ that sounded inauthentic the incomparable Allison Janney – a woman – would have spoken up?

So, again, why couldn’t Danny write about a black family? I feel like to meditate further on the themes would be to rehash the entire play (which, with all the meta winks and nods, is catnip for writers and theatre buffs). So I won’t. But I do recommend you see this for yourself and grapple with the subject matter – discuss it with your friends and neighbors. Talk about pain and whether or not there’s a hierarchy to it. Talk about the difference between sympathy and empathy, and whether one or the other is necessary to create powerful and moving art.

Setting aside the themes, let me briefly applaud the production itself. Walter Bobbie’s quick-clip direction is perfectly paced, and David Zinn’s scenic design and David Weiner’s lighting design add to the fluidity of the piece. The intermission-less play charges ahead and doesn’t cease or retreat until the falling action. (Of which there is too much. The play, in previews when I saw it, should have ended about 11 minutes and three scenes earlier than it did. This would have been a much more powerful ending.)

All four actors give fine performances here. I liked seeing the growth in Eddie Kaye Thomas’s Pete and Will Rogers’s Trevor. Both start out a little removed but throughout the play we see them become more and more engaged as they stand up for their loved ones. As Emilie, Rutina Wesley is strong but not militant as she figures out her place in Danny’s convoluted plot. And Jonathan Groff once again shines on stage. Groff has this wholly effective combination of a seriously intense gaze mixed with a calm, dulcet voice. The voice lulls you into a false sense of security and then the stare comes out and packs a wallop. It’s a powerful performance in a thought-provoking play. Look for this to have life after off-Broadway.

For more information and to purchase tickets, visit mcctheater.org. (Note that MCC has a 20 under 30 program, which allows patrons 30 and under to purchase a ticket for just $20.)

Production stills by Joan Marcus are from Broadwayworld.com.

Bonus: Check out this Playbill.com Cue & A with Rutina Wesley.