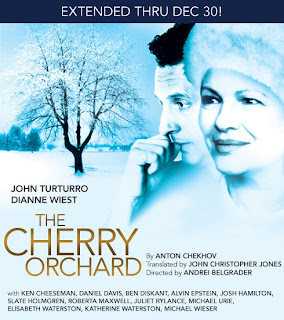 “Oh, my orchard! You’ve lived through dark autumns and endured the frozen winters, and now you’re young again...”
Though it was written in 1903 and opened at the Moscow Art Theatre in 1904 on Anton Chekhov’s birthday, January 17, The Cherry Orchard remains relevant today, with its classic theme of aging, and its characters misguidedly holding on to the past. In Classic Stage Company’s stellar production, John Christopher Jones’s new translation of Chekhov’s final work is poignant and funny (Chekhov always claimed The Cherry Orchard was a comedy), and it boasts great performances under Andrei Belgrader’s thoughtful direction. (James F. Ingalls’s effective lighting design is also noteworthy.)

In the Bedford Introduction to Drama anthology, it says, “Chekhov’s grandfather had been a serf who bought his freedom in 1841, [and] it is likely that Chekhov was especially supportive of such social change...” This is evidenced in The Cherry Orchard, and particularly in the character Lopakhin.

The story of The Cherry Orchard is fairly simple: Ranevskaya (Dianne Wiest) and her brother, Gaev (Daniel Davis), are low on cash and must sell their cherry orchard to pay off their debts. The orchard is part of the estate on which the two grew up, and when we first meet the siblings, though they are grown, they are in the nursery. Lopakhin (John Turturro), a peasant-turned-merchant whose father was a serf at the estate, tries to get Ranevskaya and Gaev to take up his plan, which would allow them to keep their property (though the orchard would have to be cut down) and, he thinks, generate revenue. Ranevskaya and Gaev are too obsessed with age and sentimentality to hear Lopakhin, and instead frivolously focus on memories and over-extending themselves to keep up appearances.

It may sound heavy, and those themes are. The beauty of Chekhov, however, and, as scholars note, his most lasting contribution to modern drama, is the deep subtext within his plays. Translator Jones does a terrific job of honoring Chekhov’s style; the play is actually very funny, and often quite light. But we are always keenly aware of what’s going on below the surface. The subtext says more than the dialogue, and that’s where the heaviness comes in. So while Chekhov may have argued that this was a comedy (and while I did laugh a lot throughout this brisk production), I would argue that the characters themselves are unaware of the subtext beneath their words, which makes them woefully tragic.

That subtext resonates so beautifully thanks to the gifted cast. Katherine Waterston (Dreams of Flying Dreams of Falling) gives her most exuberant performance to date, playing Ranevskaya’s daughter, Anya. Anya’s sister is the strong but stifled Varya, played with passion by Juliet Rylance. Michael Urie is goofy and fun as Epikhodov and Slate Holmgren looks nefarious but ultimately (and strangely) appealing as Yasha, but the show belongs to Dianne Wiest and John Turturro.

The two stars seem fearless in their portrayal of complex characters. Wiest’s Ranevskaya walks a fine line between being totally in control and having everything totally unravel. Wiest has a somewhat high-pitched, chirpy voice that works for Ranevskaya, a woman who is, though physically and numerically aged into adulthood, still behaviorally childlike. There’s an unmistakeable wistfulness to Wiest’s performance that adds to the layers of subtext. And as Lopakhin, John Turturro brings a rapturous intensity that will first lull you in, then completely unsettle you, but still leave you feeling satisfied with his character’s choice and actions and the play’s resolution.

As dramaturge notes have mentioned, Chekhov’s plays are most fully experienced in performance. And so I urge you, dear readers, to see this performance of The Cherry Orchard, playing a limited run (through December 30) at Classic Stage Company. The streamlined and insightful translation, combined with excellent performances, make this production the consummate Chekhov experience.
For more information and to purchase tickets, visit classicstage.org.
off-Broadway play