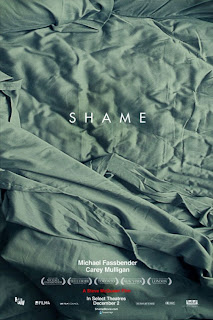 In Shame, director Steve McQueen takes an intimate look at one man’s reaction to the shame that haunts him. Though we never find out what has caused Brandon (Michael Fassbender) or his sister, Sissy (Carey Mulligan), to be ashamed, it’s clear that it is shame that motivates them both toward untoward life choices.

Brandon is numb. He dresses in muted blues and grays, and the film is shot in thoroughly unexciting and unsaturated icey colors. (The only vibrant color in the film is that of blood. It may sound gory but it actually serves as a powerful juxtaposition to the drained, washed out look of everything else.) He has no emotional range; he’s either stoic or exploding. Nothing in between. Brandon is not a sensuous person. He doesn’t do anything for pleasure; he derives no pleasure from the sex to which he is addicted—it’s just a way to deal with the shame, and it’s a way of escaping emotion. In fact, during one almost-tryst, we see that emotion and connection are his kryptonite. And during another climactic scene, he looks hollow and scared.

McQueen and his co-writer, Abi Morgan, have come up with an interesting story, but what makes the film work and the way we know all of this about Brandon is an incredible and disturbingly seductive performance from Michael Fassbender. Fassbender (who looks like a cross between Ewan McGregor and Christian Bale) has been gaining buzz for a couple years now, and this is his coming out party. It’s really quite extraordinary that he was able to convey so much through a character that never lets his emotions show. Fassbender’s performance is raw and fearless, intriguing the audience despite Brandon’s actions. 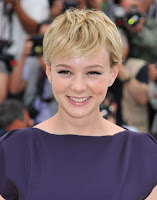 Fassbender is joined on screen by Carey Mulligan, playing his younger sister. Sissy and Brandon have what I think is an atypical brother-sister relationship, but it works because the inappropriateness of some of their interactions are evidence of their shameful past. Sissy deals with the shame by being a free-spirit bohemian, flitting from place to place, eking out a living as a singer. The one time Brandon deigns to show emotion is when he hears Sissy sing at a nightclub. Mulligan has a sweet and fine movie voice, but it’s the emotion she packs into a slow and stripped version of the Sinatra classic “Theme from New York, New York” that moves Brandon, and just might haunt you for a few days.
Shame is an intimate film, not just with regard to the subject matter but also the way McQueen and cinematographer Sean Bobbitt shot it. Shame is filled with close up, tight shots, with many scenes playing out in one take. This makes us feel like we’re spying on the subjects. In one scene, Brandon and Sissy are having a confrontation. They’re sitting on Brandon’s couch, where he was idly watching some cartoon. The camera is behind them, so we see the back of their shoulders and their profiles when they turn to shout at one another. When Fassbender momentarily looked in the direction of the camera, I felt like should have ducked! It feels like we shouldn’t be watching—this is such a personal moment and we’re intruding.

All this combines for a fascinating character study. It’s raw and explicit, which is where the NC-17 rating comes in. (Although, you know how I feel about the MPAA. If the depiction of sex and the amount of nudity in this film had an equivalent depiction of violence and amount of gore in some action or war movie, this would have been rated R.) Shame isn’t going to be for everybody, but it’s an interesting and strangely compelling story, complete with a breakout performance from Michael Fassbender.
Bonus: Michael Fassbender talks about working on Shame.
movie Shame