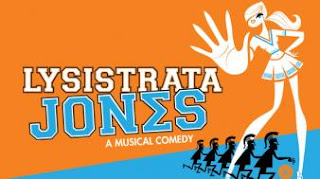 Some shows open your mind, touch your heart and move the public discourse forward. (Recent examples: American Idiot and Jerusalem.) These shows do what artists have been doing for thousands of years, since Thespis stepped on stage at the Theatre Dionysus in 534 BC. Other shows are just fun fluff. Lysistrata Jones, though it has roots in ancient Athens, is simply fun fluff.

Based on the Aristophanes play Lysistrata (which, as they point out in the new musical, is public domain), Lysistrata Jones tells of a group of young women, organized by Lyssie J. herself, who refuse to “give it up” until their boyfriends, making up Athens University’s basketball team, win a game, ending a 30-year losing streak. (In the Aristophanes work, Lysistrata, whose name means "disband the army," and company go on a sex strike until their men negotiate a treaty to end the war. When it was written in 411 BC, Athens had been at war for over 20 years. The natives were getting restless.)

While scholars have argued that in Lysistrata there is much to consider regarding women’s sexual power, and if their power can ever be considered without factoring in sexuality, that’s not what Lysistrata Jones is about. (If you’re looking for an amazing sexual power play, go see Venus in Fur.) Instead, it’s about a spunky cast bopping around to original pop tunes while playing basketball. And that’s okay. Sometimes, a show, movie, song or something else is just meant to be fun. Not everything has to be heavy or complex. (True, I tend to prefer the complex, smart and though-provoking works, but I concede that there’s room for the other.)

Playwright Douglas Carter Beane (Mr. and Mrs. Fitch) partnered with his partner, Lewis Flinn, to adapt Aristophanes’s classic play for modern times. Beane takes care of the book while Flinn handles the score. The book is funny, if a bit scattered. (There are jokes about both Amelia Earhart and iPhones.) And the songs are original, which is a noteworthy feat in and of itself. One problem with the score – and it’s really more a problem with its execution combined with the fact that this is a new show – is that I had trouble deciphering many of the lyrics, especially in up-tempo, choral songs. Mind you, you don’t miss the gist, just specific lyrics here and there.

As directed and choreographed (sometimes in a repetitive manner) by Dan Knechtges, the cast is perky and eager to please. Patti Murin leads the company as Lyssie, with Josh Segarra, Jason Tam, Lindsay Nicole Chambers and Liz Mikel, among others, appearing as featured players. Everyone was good, but no one was great. Especially for a Broadway show. It is evident that everyone on stage has talent. Murin has a nice voice and Mikel brings lots of sass to her songs. But, as a colleague of mine observed, it seemed like this cast represented the best the producers could find in Dallas, where the show was originally presented. It doesn’t represent the best the producers might find if they looked to recast for Broadway. (And they must know it, because in an attempt to add more oomph to most musical numbers, conductor Brad Simmons and vocalist/percussionist Biti Strauchn sing along, providing a vocal assist.)

Lysistrata Jones had a well-received off-Broadway run here in New York last season. It played at The Gym at Judson, making it a terrifically site-specific show. I think this scrappy, original musical could have had a long life off-Broadway, but I understand the producers’ desire to move it to Broadway. Broadway means Lysistrata Jones will be easier to license to schools and for touring and regional/community purposes. And so it goes that Lyssie Jones is on Broadway. It’s fun and entertaining, but not much more.