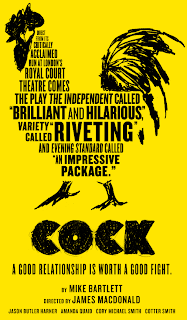 “A good relationship is worth a good fight,” claims the tagline of the beautifully written Cock, now playing at the Duke on 42nd Street. And so for 90 minutes, we watch lovers fight, and along the way we are asked to explore how our identities are tied to those we love.

The title of British playwright Mike Bartlett’s play is provocative and that’s a good thing because so is the carefully crafted content. But let’s talk about the title for a moment, because I know you’re all curious! Yes, it does, in part refer to a penis. Cock centers on a lovers’ triangle so what a certain member of the triangle does with his cock is paramount to the goings on of the play.

But the logo for the play uses the image of a rooster, and so it follows that the title also refers to a cockfight. As the tagline promises, in Cock we see some pretty good and heavy hitting cockfights. Pursuant to the playwright’s express intentions, scenic (and costume) designer Miriam Buether sets the action of the play in a fight ring. Unadorned wooden risers serve as the audience’s seats and are set up in the round, creating a small circle in the center—the ring—that we envelop. This is the entire set. There are no decorations or props. And rather than insulting the audience by miming, the actors convey everything through themselves and Bartlett’s words, which show a keen appreciation for language. I love this. (Watch below as the cast, playwright and director define Cock.)

Moreover, because the seats are sans backs and are slightly uncomfortable, we’re forced to lean in as the fights unfold. (Truth be told, much as I liked the concept, I really would have loved a back to my seat.) Director James Macdonald has his actors circling each other throughout many of the fights, just as you see boxers do as they size up their competition and prepare to throw a punch. It’s really a terrific way of creating an intimate space that entreats you to pay close attention to the carefully chosen words and focus on the emotions, rather than razzle dazzle.

And by focusing on the words and the emotions, you learn a lot. Or, at the very least, you are prompted to think deeply and thoroughly about the issues raised. We first meet John (Cory Michael Smith) as he is fighting with his boyfriend M (Jason Butler Harner). After a few The Big Meal-style shifts in time and fights, we see John meeting and soon fighting with his new lover, a woman, W (Amanda Quaid). M can’t understand how John can be with a woman, and W wants John to leave M for good and be only with her. For the final round of fighting, John, M and W gather for dinner. Things get even more intriguing when M’s father (Cotter Smith) shows up—at M’s request—for moral support.

In all this, John is trying to figure our who he is. For so long, he was one person. Then, he explains, he came out as gay and was expected to be an entirely different person. He was someone else with M, and finds himself inhabiting yet another aura when he’s with W. John struggles—agonizes, really—throughout the play, fruitlessly, it seems. When he’s finally made his choice (or has he?), he says to his chosen lover, “This isn’t what I want. It’s just easier.” How devastating.

While not everyone can relate to having to choose between two lovers, I think we can all draw parallels when it comes to defining yourself within an “us.” You’ve heard people say, upon breaking up with someone, “I need time for myself. I need to figure out who I am.” As an independent person, I feel confident in knowing who I am, but I know I act differently around certain people and groups of friends. And I certainly see shifts in my friends’ and family’s behavior depending upon their date du jour.

So what does this mean and how does it all tie into the play? Do we need to fight in order to reveal our true selves? Maybe. These fights (which, mercifully, weren’t all entirely bombastic and full of histrionics) mined greater depths and brought to light more fascinating and complex issues of self than most of the relationship plays and films that focus on the serendipitous meeting and all of life’s quirks. (In this sense, it’s kind of like Patrick Marber’s Closer, in which we gain deeper insights into sexual relationships without seeing any characters so much as kiss.) Sure, 90 minutes of conflict (with little resolution) is intense - but so is love. So are relationships. And these relationships, in Cock and hopefully in our lives, just might be worth a great fight.

To learn more about Cock and to purchase tickets, visit cockfightplay.com.

Production photos provided by Spotco Marketing. All photos by Joan Marcus.
From top, left to right: