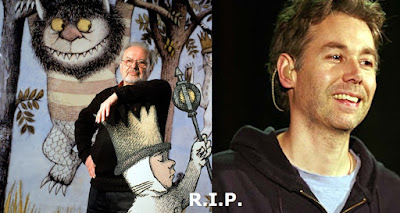 RIP, Maurice Sendak and Adam "MCA" Yauch, the man who wrote about the wild rumpus and the man who rapped about it. You'll be missed.

Videos of the Week

The Daily Show with Jon Stewart will tape a week of episodes on location at each party's national convention. As reported on The Wrap, the best f*cking news team on the planet and host Stewart will broadcast first from the Republican National Convention in Tampa, August 28-31. They'll pack up that circus and then head up to Charlotte for the Democratic National Convention, September 4-7. (After the despicable results of the recent North Carolina election, many are urging the DNC to move the convention.) So tune into The Daily Show (every night, really) for full election coverage. (And head over to Rock the Vote to register to vote or find information about your polling place and other Election Day miscellanea.)

Babs in Brooklyn
The Barclays Center in Brooklyn will welcome hometown gal Barbra Streisand this fall. On October 11, the acclaimed singer will give her first public performance in the borough. As reported on Playbill, Babs says of the concert, "Brooklyn to me means the Loew's Kings, Erasmus, the Yeshiva I went to, the Dodgers, Prospect Park, great Chinese food. I'm so glad I came from Brooklyn—it's down to earth. I guess you CAN come home again."

Tom Hanks to Make Broadway Debut
Playbill reported this week that the Oscar-winning film star (who, by the way, was an avid fan of American Idiot) will make his Broadway debut in a new play written by Nora Ephron. The play, Lucky Guy, "concerns the life of the late Mike McAlary, who was a columnist for the Post and the Daily News." The play is rumored to come to Broadway in January at a to-be-determined theatre for a limited engagement. This will definitely be a hot ticket - I'll keep you posted on on-sale dates!

Nina Arianda's Obsessions
From time to time, Broadway.com checks in with actors treading the boards to find out what their current pop culture obsessions are. In this latest installment, Nina Arianda (Venus in Fur) shares what she's digging these days, including Downton Abbey, Queen and tulle tutu skirts! (Speaking of Downton Abbey, star Dan Stevens wrote in the Telegraph about performance art and a new art sharing site, Art Stack.)

Shakespeare in the Park
The full cast for the first of the season's two Shakespeare in the Park productions, As You Like It, was announced this week. Joining the previously announce Oliver Platt, Lily Rabe and Stephen Spinella are Andre Braugher (The Whipping Man) and Will Rogers (The Submission). Shortly after the cast was announced, Broadwayworld.com shared these photos of the company in rehearsal. As You Like It will run at the Delacorte June 5-30, followed by Into the Woods July 23-August 25. (Rumors bubbled up late this week that Into the Woods may be headed for a limited engagement on Broadway after its run in the Park. I'll keep you posted.)

Austerity for Everybody
In a recent blog post, Rolling Stone Contributing Editor Matt Taibbi adds his voice to those laying out the case against extreme austerity measures. He points out the completely illogical situation we're in, in which "we...rescued the banks who inflated [the now exploded mortgage bubble] in the first place...and [then took] an ax to 'entitlements' like health care and retirement benefits." Going further, he reminds readers of the excessive bailouts the banks received; that these same banks - which engaged in grossly usurious activities - can now borrow money from the Fed at zero or near-zero interest, meanwhile the interest ordinary Americans earn on their savings is reduced. (Or, for example, student loan borrowers see their rates double.) Read Taibbi's article and stay informed about what is happening with your money.

NYC Ballet
The City Ballet spring season has begun. Last week, I had the pleasure of attending an All Robbins program on Founding Choreographers Day. (The live performance was preceded by a screening of the film adaptation of NY Export: Opus Jazz!) Next week, I'll get to see new works by Peter Martins and Benjamin Millepied. But this week, it was corps de ballet member Justin Peck who garnered some attention. The dancer is making a name for himself as a choreographer (to wit: City Ballet will premiere one of his works at their summer home, Saratoga Springs, and in October the company will premiere another of his works at their Lincoln Center home), and Backstage caught up with him to find out his approach to choreographing and what he looks for when auditioning dancers. (For more information about City Ballet, log on to nycballet.com.)

Vice News
HBO is teaming up with media outlet Vice to create a weekly news program called, cleverly, Vice. Bill Maher will serve as an executive producer. According to the announcement on The Wrap, Vice will be hosted by Vice founder Shane Smith, and will "showcase a mix of stories from around the globe."

Peter and the Starcatcher
Treats abound this week for the acclaimed and magical play that is up for nine Tony awards.

Vote for the Tina Awards
Broadway has the Tonys so off-Broadway has the Tina Awards. Voting is now open for the Tinas, which honors the best of the season's off-Broadway offerings (like Now. Here. This., The Big Meal and Assistance), and even includes the category Best Season, in which you get to vote for the off-Broadway company (like the Vineyard, Playwrights Horizons, the Public, et al.) you think had the most outstanding season. Voting is open through June 1 and the winners will be announced on June 5. Head on over to BestofOffBroadway.com to vote!

Jimmy Fallon will Blow Your Pants Off!
Or, rather, his new record might. The funny man host of Late Night with Jimmy Fallon is set to release his second album, Blow Your Pants Off, on June 12. As Rolling Stone describes it, the disc will feature "song parodies and team-ups with high-profile rock stars," like The Boss, Eddie Vedder, Sir Paul McCartney and others. In addition, the album will include Brian Williams slow jamming the news and the JTims-Jimmy Fallon collaboration, "History of Rap."